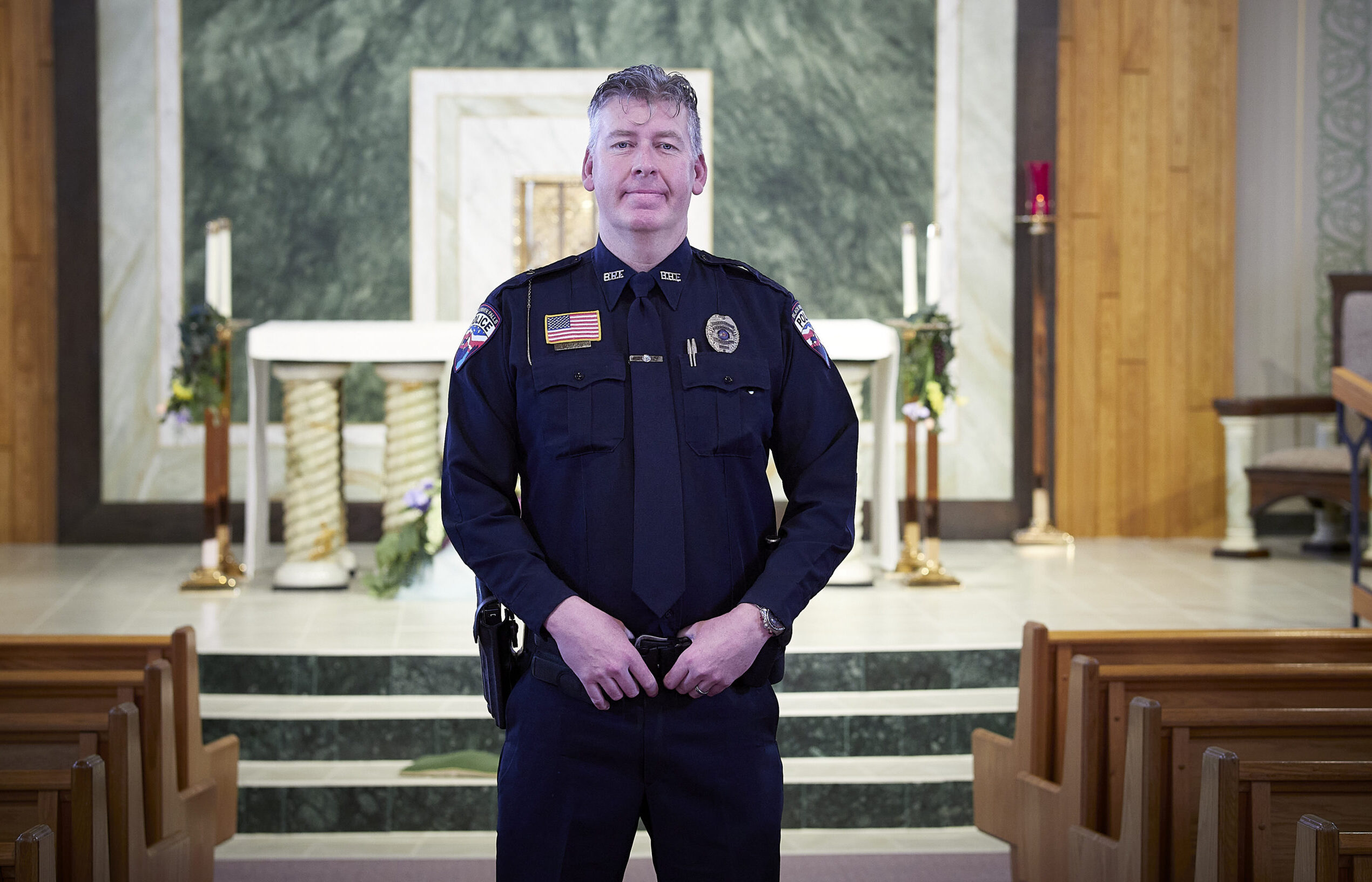 Stories of inappropriate law enforcement behavior, including excessive use of force, have been in the forefront of news media coverage in the last few years. However, the vast majority of police officers are honest, decent people doing a noble job; they are worthy of our respect and gratitude. Officer Billy Carpenter, a member of St. Patrick Parish in Onalaska and a patrol officer with the Black River Falls Police Department is an example of such a person.

Billy Carpenter was born in Madison. His family moved around the country when he was young, but eventually they returned to Wisconsin and settled in Black Earth, about 20 miles west of Madison, when he was in fifth grade. He enjoyed sports, particularly basketball and cross-country track, while he attended Wisconsin Heights High School and described himself as being “jock like.” He wore his letter jacket everywhere. Standing 6 feet 7 inches tall, he was and still is physically fit and presents an imposing figure.

Following high school, Billy enlisted in the Marine Corps. At age 17, he was a heavy equipment operator. He commented, “It was an amazing job. You know, here I am, 17 years old, operating big cranes, bulldozers, and all that kind of stuff. I remember being in Korea and using a crane to load the admiral’s helicopter because I was the only crane operator in our unit. Here I am, millions of dollars of equipment, and I am the guy responsible. It was an awesome experience, and I loved every minute of it. However, once I advanced to corporal, operating equipment was out, and I had a choice of being a dispatcher or being responsible for keeping the equipment maintained. Neither of these jobs appealed to me, so I left the Marine Corps.”

Billy returned to Madison and worked in construction while he was deciding on what to do with his life. During this time, he became acquainted with the associate dean at Blackhawk Technical School in Janesville, who encouraged Billy to go to school. His recommendation became clear when Billy saw that the Wisconsin State Patrol was hiring. Billy said, “This would be an awesome job. They are very military-like. I just started working on the paperwork, and it said you had to have 60 college credits.”

Timothy Taylor, Billy’s friend, also kept urging Billy to go to school, and finally he enrolled in the liberal arts associate degree program at Madison Area Technical College (MATC) thinking that he might go on for a liberal arts degree in the future. Following graduation from MATC, he attended the police academy and started working in law enforcement with the Department of Veteran Affairs. He recently retired after 23 years of federal service to work in municipal law enforcement.

Growing up, Billy did not have a positive experience with organized religion. At best, he described himself as being indifferent, perhaps a bit of an atheist. He did say that he believed that good people would do the right thing.

His view on religion changed in 2019 when he met his wife, Nadia, and her family, who have deep Catholic roots. There were other connections, too. Nadia, now a practicing psychologist, was a major in the Air Force and Nadia’s father retired as a captain in the Navy. The military connection was strong.

Billy recalled his first “Catholic” experience. “I was in Arkansas for police training, and Nadia came down to visit me. She arrived on a Thursday, and the first thing she said was that we had to find a church to attend Mass on Sunday. So, we found a church but did not look at the particulars of Mass times. We just picked a time that fit our schedule. I think it was 10:30 a.m. Mass. When we got there, we found out it was a Spanish Mass. Neither one of us understands Spanish. She apologized and said she was so sorry, and I told her I just loved it. It was lively and joyful.”

Being with Nadia and her family and coming to understand and appreciate that their Faith is a big part of who they are and seeing how it guides them in their relationship with people, influenced Billy to join the Catholic Faith, as well. Billy went through the Rite of Christian Initiation of Adults (RCIA) program, and Nadia and Billy were married in 2020. Interestingly, Billy remarked that prior to meeting Nadia, he had always worn a St. Michael’s medallion. “Since I became a cop in 2001, I’ve worn a St. Michael medallion every day while on duty. Strange for a non-religious guy. I don’t know why I did. Perhaps it is because St. Michael is a patron saint.” St. Michael the Archangel is the patron saint of paramedics, police and military personnel.

Billy has always treated people with respect to the best of his ability, regardless of the situation he finds himself in. It is part of the training he received while at the police academy. “Passages that talk about treating people the way you would like to be treated stand out for me as do passages that speak to compassion. I’m struck by Matthew 25:40: ‘Whatever you did for one of the least of these brothers of mine, you did for me.’”

Billy related several stories where the messages contained in his Faith experience were realized. “Nadia takes good care of me and makes me lunch to take with me for my 12-hour shift. Heavy on the peanut butter! So, I take my sandwiches with me on my patrol. There is a guy who I sometimes see. I’ve never dealt with him in a criminal way. It turns out that he is homeless, but it is difficult to lead him to do anything different. So, sometimes I just pull up to chat with him. ‘Hi, how are you doing?’ He would go off, and then come back. I ask him, ‘Do you need anything tonight?’ He says, ‘I need to eat. I’m hungry.’ I give him my sandwich. At first, I thought Nadia would be mad at me because I gave away the sandwich she made for me. She wasn’t mad. She reminded me that I was giving away something of mine to help somebody that is really down and in need. I can always get another sandwich. He can’t.”

Recalling an experience as a young police officer doing part-time work in the village of Warrens, Billy said. “There was a young lady who I observed driving a car with two little kids in it, and I knew her license had been suspended. I stopped her and told her she can’t be driving with a suspended license and, without thinking too much, I wrote the citation.

“Maybe a week later, I was working again and there she went driving by, because she lived in the village, and I pulled her over. Clearly, she was in violation, which required issuing a citation, but something clicked in my mind. It turns out that she was a single mom. I asked her where she was going. She said she was going to drop her kids off at daycare so she could get to her job. Some time ago she had gotten a traffic ticket and did not have enough money to pay the fine, so the state automatically suspended her driver’s license. She was stuck in a circle here. In order to get her license back, she had to pay the fines, but she needed to drive to get to her job so she could earn money to pay the fines. So, as I am talking to her, I tell her, ‘Look, you can’t drive on a suspended license, but giving you a ticket doesn’t help you. What I can do is tell you that if you contact the clerk of courts you can talk to them to set up a payment plan or work something out so you can get your license back.’ And we left it at that. After that, I never stopped her again, and she did get her license back. “

Sometimes, without thinking too carefully, parents, in order to get their children to behave when they see the police, say to them you better behave or he’s going to take you in. Billy has always disliked this attitude. To combat this kind of thinking, he has done things to get kids to think positively about police. To get them to know that police are there to protect them and to serve their community. Billy said he always carries pencil kits, stickers, police badges and matchbox cars with him. “I carry them underneath my vest. I drop down on one knee to be at their level and have a little chat with them and give them something. The other day I gave a little girl a stuffed animal to help calm her during a pretty traumatic situation. It’s like, if you can make a little kid smile, that’s pretty cool.”

Billy recently joined the Black River Falls Police Department and works a 12-hour shift from 6 p.m. to 6 a.m. He and Nadia have three children, 2, 11, and 12 years old. Billy’s experience has shown that the officers he has worked with are dedicated people who are concerned with protecting and serving the communities they work in. “I’ve never seen such guys who are so good at talking with people and being able to relate to them. I’ve never met an officer who had a personal grudge against somebody. We like to be treated nicely and to treat people nicely so, in the end, we can shake their hand and walk away. That is a good thing.”

All are welcome. We encourage participating first responders to wear their dress uniforms. If you have questions about the Blue Mass or are interested in information about this year’s event, please contact Steven Nott, the St. Patrick Parish liturgy planner at 608.783.5535 Ext. 8 or [email protected].