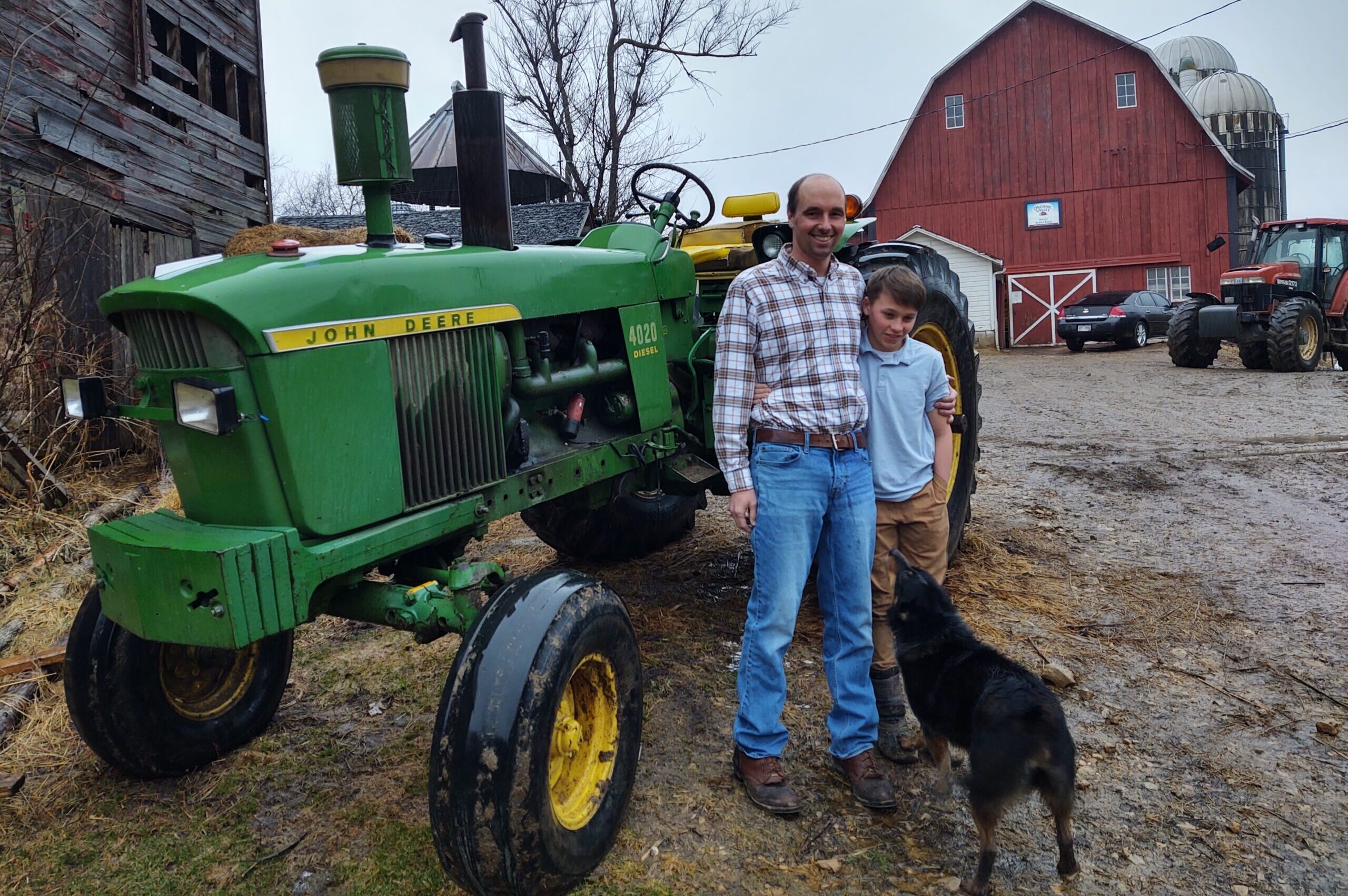 Mark and Connor Stoltz emphatically agree, “It’s the food!” Mark, father to Connor, easily recalls his former grade school years at Assumption of the Blessed Virgin Mary School in Richland Center. Speaking across 25 years, as though they were 2 days, he says, “The food is what I miss the most. Food for your soul, your body, social life and emotionally, too.” Across the kitchen table, Connor, 12, is nodding. He eagerly starts to support the argument saying, “Our food at St. Mary’s is better …” but then his voice just trails off, leaving the rest unsaid. He suddenly realized that perhaps “better than” must mean that others are less than. Less than him. Tentative, perhaps a little humbled, he doesn’t continue. Polite and precocious, he defers to his dad, who continues after a short pause.

On Wednesday, Sept. 14, St. Mary’s Father/Son Dinner opens its doors at 6 p.m. Cheese, crackers and sausage hors d’oeuvres lead off before the evening’s main course, a choice of roast beef or chicken. All fathers and sons are welcome, including non-parishioners. The program this year features Father Sam Martin from Wausau, as well as awards given by the local Knights of Columbus chapter. The Stoltz men, Mark and Connor, are among this year’s honorees. There are drawings and prizes, as well. Connor mentioned that past year’s prizes included baseballs, basketballs, fishing poles and once there was even a BB gun. So far, he hasn’t won anything at the dinner drawings, but maybe this year will be different.

Getting together for a meal is something the Stoltz family does regularly. On Friday nights, Mark’s extended family, his siblings, nieces and nephews all gather at the grandparents. Grandma Stoltz, Shirley, was a teacher at St. Mary’s School back in the ‘90s when Mark attended. She started the Stoltz dairy in 1984, a year after Mark was born. Under Shirley’s care, the dairy operation grew steadily, but by Christmas 2011 she told the family that her work with it was done and the farm was going to be sold. For Mark and his wife Cari, Christmas 2011 marked a turning point.

The couple had met and married in Omaha, Neb., in 2008. Together they owned a nice suburban home, and both had solid careers underway. Cari cared for infant Connor while working from home and was pregnant with their second child, daughter Laura, due months later in July 2012. But Mark’s work as sales manager for Claas, a forage equipment manufacturer, engendered a lot of stress and brought rare, fleeting fulfillment. He thought the Stoltz dairy farm might mean a better way of life for their new family. He and Cari prayed to know God’s will.

The Stoltz family have always prayed regularly and still do. They pray as they wake, before each meal, as needed throughout the day and again at bedtime. It’s their way of inviting God into their lives and into their family. Through prayer, they heard a call to move to Wisconsin, to take over the Stoltz dairy and to continue the work begun by Mark’s parents. The call, and the decision they took afterwards, was hard. Mark felt professionally obligated to help Claas find his replacement, a new sales manager. Already working long hours and traveling a lot, he now had to prepare his family to change their way of life. For Cari, the move meant parting from her work colleagues and neighborhood friends. And, of course, it also meant a change of parish. St. Vincent de Paul Parish in Omaha was big. It had five Sunday Masses, a 10-page bulletin and great support ministries for young suburban families. By comparison, St. Mary’s in Richland Center was bound to seem small. At first, Cari’s extended family wasn’t supportive. Worse—much worse—Connor, barely a year old, became seriously ill and required a blood transfusion.

Today, Connor is fine, even excellent. He’s 12 and a straight-A student. He plays three sports and all of them well. His favorite sport is basketball, but soccer is actually his best. This year, their local baseball traveling squad is all sixth graders, all buddies, all talented and ready to really clean up on the schedule. Connor is on the student council at St. Mary School. Recently, the council raised funds to buy a new TV for the middle school.

Just now, they’re working on a fundraiser for Gavin, a student who’d been hurt snowboarding. He’s from Richland Center, but not a student at St. Mary’s. “That doesn’t matter,” says Connor, knowingly.

Connor is well-traveled. He’s been to 45 of the 50 states. His family went to Alaska a couple years ago, saw reindeer and caught salmon. Wherever they travel, they visit Catholic churches. Both Connor and Mark recommend St. John the Baptist Catholic Church in Homer, Alaska, with its windows that look right out over the ocean. Connor’s favorite place of all time? Key West, Fla. He likes it where it’s warm.

There is so much to share at the Father/Son Dinner, for the Stoltz men and for the 100 or so other parish men and boys who’ll participate. The men will all bring their favorite stories, their best stories, their goals, hopes and challenges, their joys and jokes and maybe a jostle and a jibe or two, because that’s what men do at men’s dinners. Mark enjoys the dinner because it has an important difference. The Father/Son dinner is one where men talk about more than worldly success; they talk freely about their Faith. Everyone prays together, like a family, and they discuss God’s plan, God’s callings, where His work’s been done and where His work is needed.

The men will ask about each other, ask about who needs help, who’s been hurt, who has fallen. Who among their parish, or in their community, isn’t able to hear God’s good news, isn’t seeing God’s glory in creation? As men of Faith, as sons of the living and loving God, they will listen to hear who may be most in need. As loving fathers, they know those conversations, those voices are the still voice of our heavenly Father. It is His call. They answer when they can, these fathers. It is their best way to teach their children. Taught well, as Connor and the other students of St. Mary’s have been, the student council buys a TV for the middle school and helps the family whose son was hurt snowboarding.

The Gospel of Matthew gives us two stories in which God the Father encourages Jesus, His own Son. At the Jordan River, after John the Baptist baptizes Jesus, God says, “This is my beloved Son in whom I am well pleased.” Mt 3:17 A few chapters later, Peter, James and John, the brother of James, see Jesus transfigured in glory, in company with Moses and Elijah. God says again, “This is my Son, whom I love; with Him I am well pleased. Listen to Him!” Mt 17:5 Those two passages reveal our own belovedness. We, too, through Jesus, inherit sonship and community with God, with all creation and throughout all generations, forever. The perfect expression of that relationship is the Mass where we share Jesus Himself. But another expression is when we gather in His name at our family table or in community for events like the St. Mary Father/Son dinner. There we can share ourselves, including our obvious imperfections. But more importantly, we can share our better selves, the good things we do together for others.The best part of the Father/Son Dinner? The conversation will be great, for sure. But the best part? Mark and Connor are emphatic, “It’s the food!”

Calling all dads and sons!