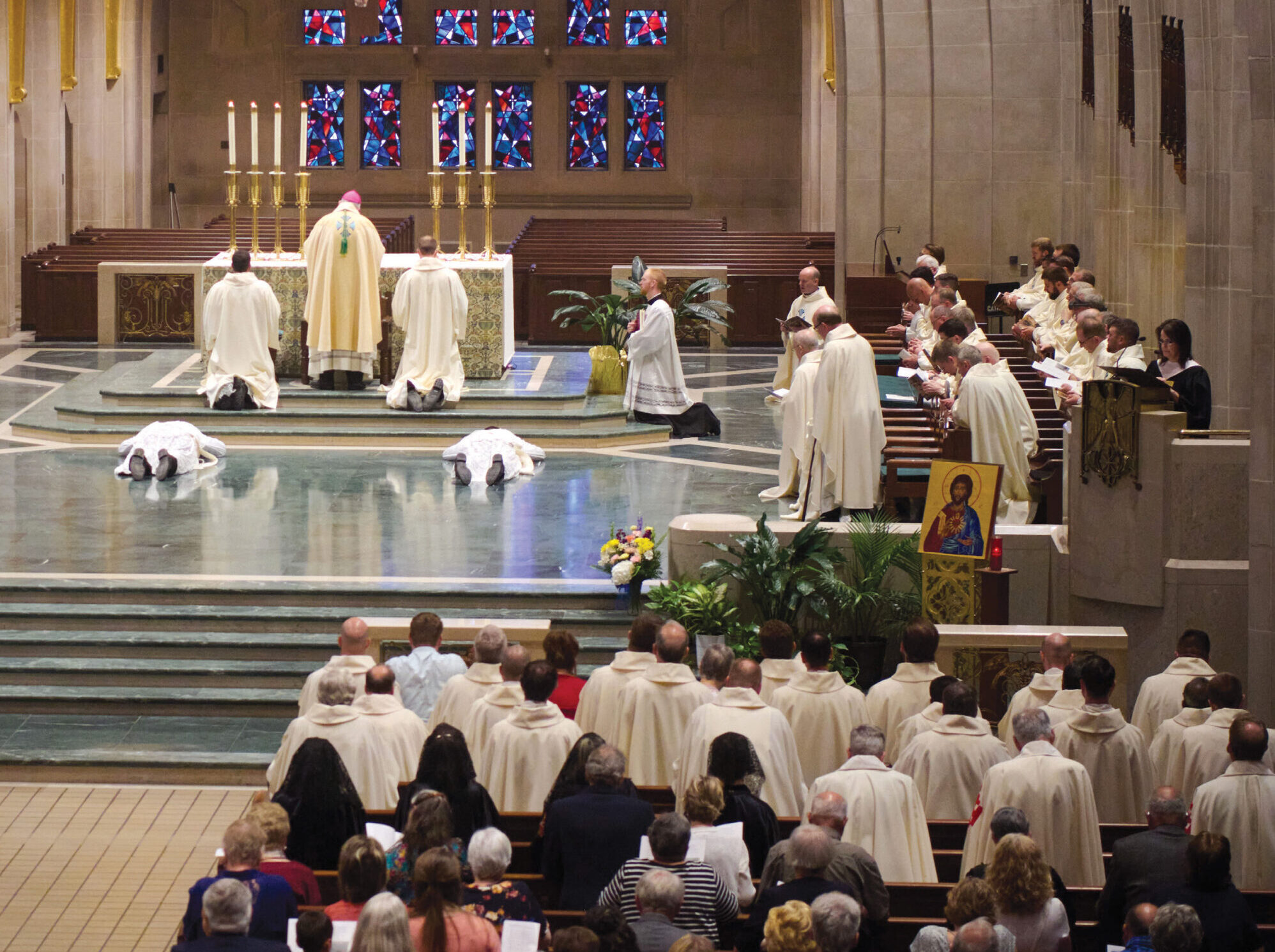 On Saturday, June 25, two men from the Diocese of La Crosse received the sacrament of holy orders from Bishop William Patrick Callahan at St. Joseph the Workman Cathedral in La Crosse. Father Matthew Bowe and Father Steven Weller celebrated the momentous occasion with family, friends and others from around the diocese.

Growing up in Bloomer, Father Bowe attended St. Paul Parish with his parents, Travis and Amy, and his younger sister Shelby. Faith was not the center of his life.

“Growing up, I was nominally Catholic,” says Father Bowe.

His decision at the University of Wisconsin-Eau Claire to join the Newman Center made a big impact. “It did hit like a lightning bolt,” Father Bowe says. “It was the end of my sophomore year of college. It took an intense prayer hour to let go of the idea of being called to be married and start looking at the priesthood.”

Father Bowe graduated in 2015 with a double major in math and physics. After graduation, he went into seminary and did his first year of pre-theology at Mundelein.

His second year was spent in the Diocese of La Crosse Regency Program, which focused on areas of spiritual and human formation. This new program in the diocese was designed to help seminarians with discernment that’s outside the normal seminary formation.

“I know that God has a plan for me, so I want to keep myself open to what God wants me to do.”

“One of the things I’ve had to learn, in order to grow, is how to be vulnerable. Growing up, I built a lot of walls,” says Father Bowe. “I was comfortable with others being open to me, but I needed to work with my emotions and articulate them. It was tough. The first semester was breaking down those walls and the second semester was learning how to use tools to grow in effective maturity and have a better understanding of myself.”

Formation was on Tuesdays and Thursdays. Father Bowe also had a job and took one class each semester at UW-La Crosse. One of his jobs was teaching CCD to ninth-graders.

Father Bowe learned a lot about himself in the Regency Program. He needed to understand and work with diverse personalities.

“I’ve drawn a lot of strength from that experience; entering into uncomfortable situations and working with potential conflicts,” Father Bowe says.

After finishing his minor seminary experience at Immaculate Heart of Mary Seminary in Winona, Father Bowe attended St. Francis de Sales Major Seminary. “I’ve enjoyed all my years there,” he says. “This is where Bishop Callahan said to go, and I’m glad. The formators and the seminarians created an atmosphere that’s a home. We had access to the kitchen and each floor’s lounges. There were a lot of activities we did together. It was very lively. Everybody found a fit there and it was awesome.”

Although COVID kept Father Bowe and the other seminarians in his class from fully experiencing life in a parish, this past year as a deacon allowed him to experience parish ministry at St. Eugene Catholic Church in Fox Point near Milwaukee.

“The people of the parish have been very welcoming and hospitable. I preached once a month and have performed several baptisms,” says Father Bowe. “It’s a very prayerful and spiritual community.”

School was always a comfortable place for Father Bowe. He graduated from major seminary with a master of divinity and a master of arts in sacred theology.

Although working with parishioners is a different challenge for Father Bowe, he is happy to be in a parish setting and feels prepared, thanks to his formation.

In addition to celebrating the sacraments, Father Bowe is looking forward to being involved with youth and young adult ministry, where he can inspire and encourage vocations.

“I know that God has a plan for me, so I want to keep myself open to what God wants me to do,” says Father Bowe.

Father Weller grew up in Wittenberg and attended St. Florian Parish in Hatley.

His parents, Paul and Eileen, raised him and his three brothers in a loving home; but the Catholic Faith was something fairly distant from his mind.

That changed suddenly during a short car trip. “I was in the eighth grade and my dad had a leadership CD that he wanted me to listen to,” says Father Weller. “The CD was about American history. The author said something very profound—he said Americans believe that God makes all things with purpose.”

The CD inspired his first prayer from the heart. “Lord, what do you want me to do for you? I’m here to do your will,” Father Weller prayed. “It made sense to me to ask the person who created me to be happy, how to be happy.”

Father Weller was pulled to the Catholic Church. “Something happened to me that I can only call sacramental grace,” he recalled. “I wanted to go to confession. I just knew I needed to go there because I needed God. I started reading Scripture. I’d read at least five minutes a day.”

Father Weller wasn’t alone in hearing God’s call. “My whole family, during that time, went through a transformation of Faith,” Father Weller says. “The Lord was moving our hearts simultaneously. My parents grew deeper in their Faith.”

His prayerful entry into the Faith did not translate to consideration of the priesthood at first.

“I was in my sophomore year of high school and my pastor, Father Al Burkhardt, walked right up to me during his homily and asked, ‘Have you ever thought of being a priest?’ I was like, ‘No!’” Father Weller says. “That really stuck with me.”

“The seminary first helped me grow into a Catholic man of prayer.”

“Later, I went on a seminarian retreat weekend. Being with other young men discerning where God was calling them to service seemed right for me.”

“When I think about my vocation, I think it was very much a miracle. I didn’t know about the Real Presence of the Eucharist until I got to St. John Vianney Seminary in St. Paul, Minn.,” says Father Weller, “and my desire for priestly ministry didn’t really flourish until my third year. The seminary first helped me grow into a Catholic man of prayer. When you get those foundations down, then God’s Will can take over. He moves us with peace and joy, and I found peace and joy in ministry.”

Father Weller continued on to theological studies at St. Francis de Sales Seminary in Milwaukee. There he had several different pastoral assignments, including hospital chaplain work, homeless ministry and parish ministry which helped form him into a loving priest.

“The best assignments I had,” comments Father Weller, “were the ones I was most uncomfortable with; God works best in our weaknesses.”

He sees no better place to be a man of purpose and service than the Church. “I would point to the Gospels and the call of the first disciples—how they just left their nets and followed Jesus,” says Father Weller. “There’s something very manly about totally going for something. The Church is on a battlefield, and she needs men to come to the battle.”

Priesthood offers Father Weller a welcome sense of gratitude. “I’m looking forward to what God has in store for me,” he says. “God is eternal and outside of time. With Him everything is new.”