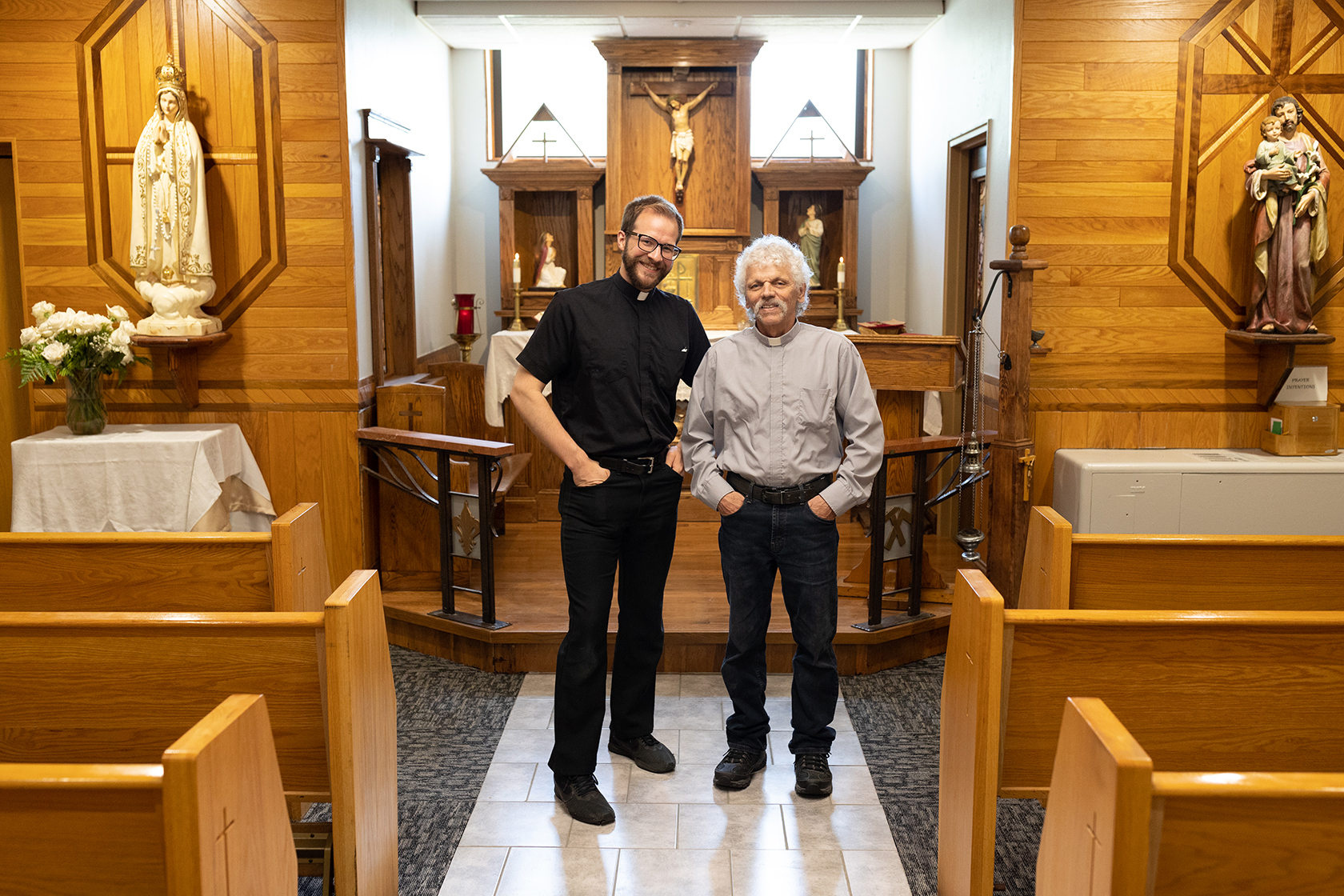 The campus of Assumption High School and Middle School in Wisconsin Rapids is a vibrant and growing community of Faith and academics. Father Levi Schmitt was welcomed as Assumption’s chaplain in the summer of 2020. Immediately, he was impressed with the culture, Faith-focus and commitment of the administration and religion teachers. He worked hard to continue to foster this forward movement of Faith.

One particular morning, in the spring of 2021, Father Schmitt was praying in the chapel, as he often did. Gazing upon the crucifix, he felt prompted by the Holy Spirit to make the space a “sanctuary” for all who entered. He also felt the space needed a statue of St. Joseph, as the Universal Church was celebrating the year of this great saint. St. Joseph became the patron for the undertaking of this project and, with this renewed prominence, continues interceding in many ways in the lives of the students and staff of the school.

Providentially, Father Schmitt knew just who to consult for his building project. As the associate at Our Lady Queen of Heaven Parish, he worked closely with Deacon Tom Anderson, a skilled woodworker, whose handiwork beautifies every corner of the church. Deacon Anderson was excited to lend a hand. Work began on the project after the 2021 school year came to a close.

Hoping to resolve some of the difficulties the previous layout offered, Father Schmitt knew he needed to do some rearranging. “There is great symbolism of the sanctuary,” Father Schmitt explains. “The sanctuary space of a church or chapel is meant to symbolize heaven, the sacred place where God dwells. We see this especially when Christ in the Eucharist comes out from the sanctuary to meet his people during communion time—heaven and earth meet. In the remodel, we really wanted to define the chapel’s sanctuary clearly. We were able to accomplish this by expanding the setup into the five or six feet of space behind the altar that had previously been unused.”

The sanctuary now accommodates ad orientem worship. The decision for this arrangement was principally made to maximize the limited space, but the form’s rich history has been embraced by the community. “I’ve been praying the Eucharistic Prayer ad orientem for the last few months,” Father Schmitt shares. “It’s incredible how prayerful it is for me as a priest to be able to look up at the [new] crucifix rather than the small crucifix on the altar or at the back wall of the chapel … In praying [this form,] I’ve paid more attention to the Eucharistic Prayer and just how often the word ‘you’ and the word ‘your’ are not addressed to the people, they’re addressed to God. It suddenly becomes this dialogue where Christ is speaking to His Father through me. We are a sacramental people, and where we look physically affects how we look spiritually.”

From the Trinitarian symbolism throughout the chapel to the Peruvian-imported statues of St. Mary Magdalene and St. John the Beloved, icons of vocation, perfectly poised to gaze upon the crucified Christ, the chapel is full of meaning and beauty. Deacon Anderson was there to assist the project every step of the way. Father Schmitt calls him “the resident St. Joseph.” The finished product of the two men’s teamwork is a stunning chapel update that draws one in and gives focus to all the right details.

Father Schmitt has offered many daily Masses in the updated chapel and continued Assumption’s long tradition of First Friday adoration during the school day. He was especially encouraged when he would see a teacher, staff member, administrator or student taking time for silence and prayer in the chapel. It has become a true sanctuary, essential to the workings and programs of the school and campus ministry. An early-morning discipleship course focusing on Lectio Divina was born out of the campus ministry program and found a home in the chapel.

As his time in Wisconsin Rapids came to an end this past summer, Father Schmitt prepared to leave the school for his next assignment just as he was completing his final design for the stained-glass windows to be placed on either side of the crucifix. It was surely bittersweet to leave before the final touches were done, but it came time to hand over the reins to the new chaplain and leave behind his labor of love in hopes it will continue to foster prayer and enhance the Faith community for generations to come.

Story by Amy Eichsteadt
Photography by Northbound Photography and Design
Published in the Sept./Oct. 2022 issue of Catholic Life Magazine