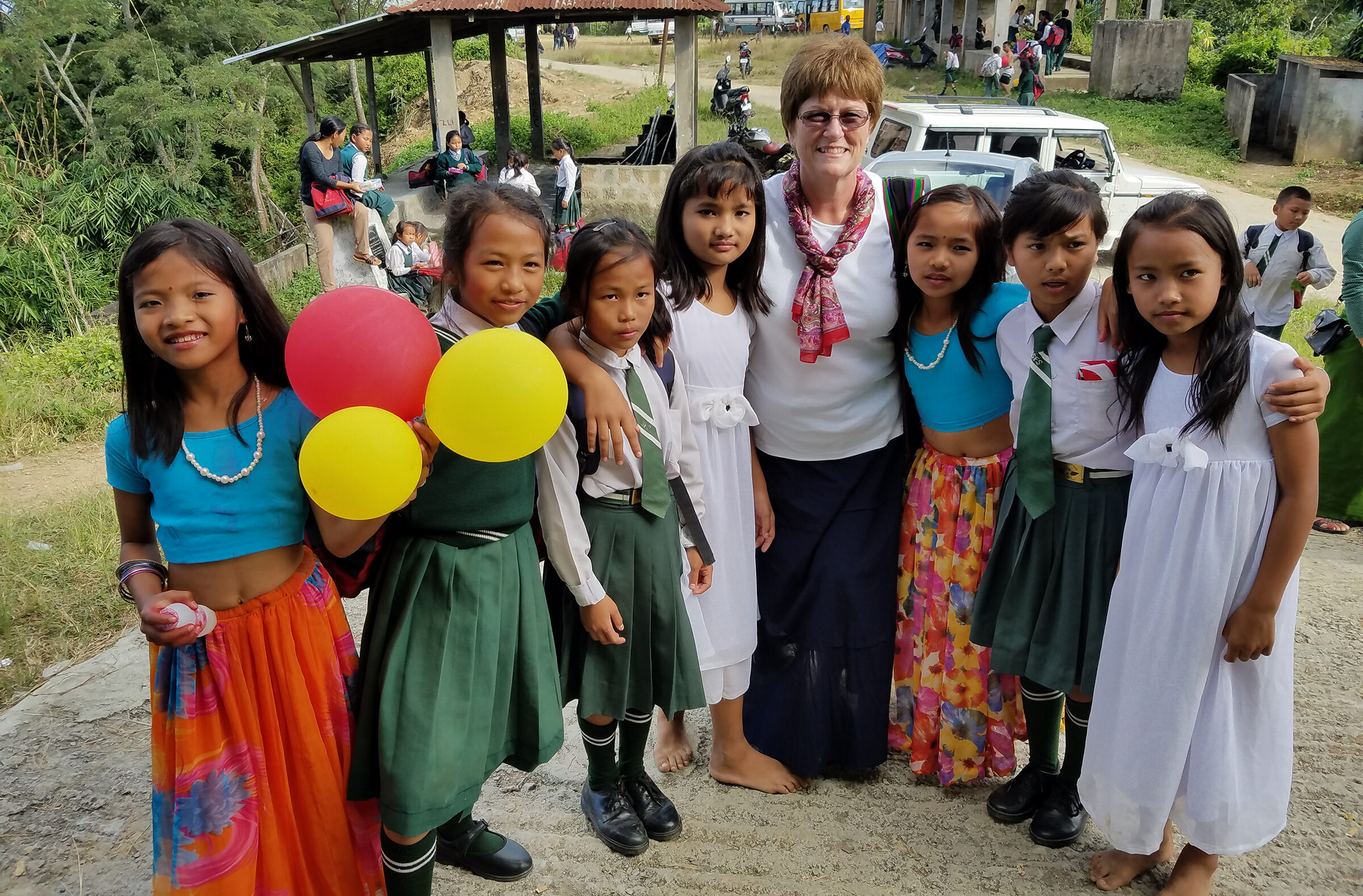 When Sue Weiner returned to the United States from a trip to India, she was struck by one indelible truth. Americans may be rich in material possessions, but the people of India have something much more valuable: joy. “Many people live in such extreme poverty in India, yet their joy is so huge and tangible,” Sue says. “You don’t see that here and it makes me sad. We have all of this ‘stuff’ that people think makes them happy, yet there is no true joy in their lives. The people I met in India live in simplicity, and they know what is important in life.”

Sue’s interest in India began years before her trip in 2016, originating through conversations with her spiritual director, Father Francis Thadathil, a native of India who now serves in the Diocese of La Crosse at Immaculate Conception Parish in Eau Claire. “He told me about Sateek, a small village in northeastern India,” she says. “He shared that the people and village elders were desperate for education for their children, but the area was too remote for the government to build a school.”

“The parents petitioned their local bishop for help and he contacted Father Francis’ religious order, the Missionaries of St. Francis de Sales,” Sue continues. The MSFS provincial took steps to start the construction of a temporary structure in 2010. “The parents knew that education was key to a successful future for their children, so they collaborated to donate a few acres of land for the school,” she explains. Through coordinated efforts, the temporary building was ready in just 40 days, built with a thatch roof and corrugated tin and asbestos boards for walls.

While this temporary school was a big first step, it was the parents’ dream to eventually build a permanent school. “Through conversations with Father Francis, I got excited about raising funds for this project,” Sue says. “At the same time, Monsignor Richard Gilles became our pastor, and he encouraged St. Andrew Parish to take on a mission project. We talked with the parishioners and the parish council and decided raising funds for the school would become our mission project.”

Many people live in such extreme poverty in India, yet their joy is so huge and tangible.

From there, the fundraising efforts grew. “Before long, the project expanded to St. Mary Parish in Tomah and St. Patrick Parish in Onalaska,” Sue says. “We were able to raise enough money to build the first wing of the permanent structure, with six classrooms and toilets. It was quite an accomplishment!”

The first phase of the permanent school was dedicated in November of 2016, and because she was so involved in the fundraising efforts, Sue made the trip to attend. “What struck me at the dedication was hearing how badly the parents had wanted this school, and the efforts they took to make it happen,” she remembers. “Initially, there were no roads to the school site, so rocks were hauled there and the parents and children laid them one by one—by hand—to make a road to the school. Imagine the work! It just shows that they would do anything to provide an education for their children.”

Sue says she was overwhelmed by how appreciative the parents and children were. “They continually expressed their gratitude and respect for their school,” she says. “The children wore their school uniforms so proudly. Even though there was a language barrier, I could see in their faces how grateful everyone was. I could feel their love and joy.”

Sue says the school has given the village more than just a building to provide education. “Before the school was built, there was no infrastructure, no electricity and no roads to that part of the village. Now they have paved roads, electricity, wifi and even a school bus!” she exclaims. “The school opened the village up to commerce. Now, because there are roads, they can take their goods—agricultural products, crafts they make—to the bigger cities to sell. They have the ability to market what they have and it is raising up the whole community!”

During her stay in India, Sue made a side trip to Mother St. Teresa’s Missionaries of Charity in Calcutta. “The joy and love of the sisters just permeated the entire orphanage that I visited,” she said. “My own son, Patrick, was born with VATER syndrome, a rare condition of multiple birth defects. Patrick passed away when he was 2 ½ years old. I didn’t know how I would feel being around children with similar disabilities. But then one of the sisters plopped a little girl with disabilities in my lap. I looked at her face filled with love, and I never looked back.”

“No matter what physical difficulties the children were experiencing, the love and joy of the sisters amongst the children spread,” she continues. “It was so contagious; you couldn’t help but experience it yourself!” Sue says the sisters never drew any attention to themselves. “You felt like you were their instant friends. You were one of them. There was joy everywhere.”

Becoming involved in the Sateek mission project was a life-changing experience for Sue. “While I’ve always volunteered within my parish and community, this project was different,” she says. “During spiritual direction with Father Francis, we studied the “Introduction to the Devout Life,” by St. Francis de Sales, and things really changed for me. I believe that was what prepared my soul to become active in something that wasn’t within my community—more of an outreach. Helping to raise funds for the school became a personal involvement. I felt such satisfaction helping God’s people. It really was God’s mission, and I was just a little tool in that mission.”

But there is still more work to be done. As enrollment grows every year, so, too, does the need for additional classrooms. “I’ll continue to fundraise until the entire school is complete,” she vows.

Sue says her journey to India also made her appreciate how universal the Catholic Church is. “All of the wonderful people I encountered in India made me realize that they are our brothers and sisters in Christ, just like the person sitting next to me in the pew at my parish. We truly are a universal family.”

If you would like more information on the Sateek school project, you are welcome to contact Sue Weiner c/o Queen of the Apostles Parish in Tomah at 608.372.4516 or the Diocesan Mission Office at [email protected].