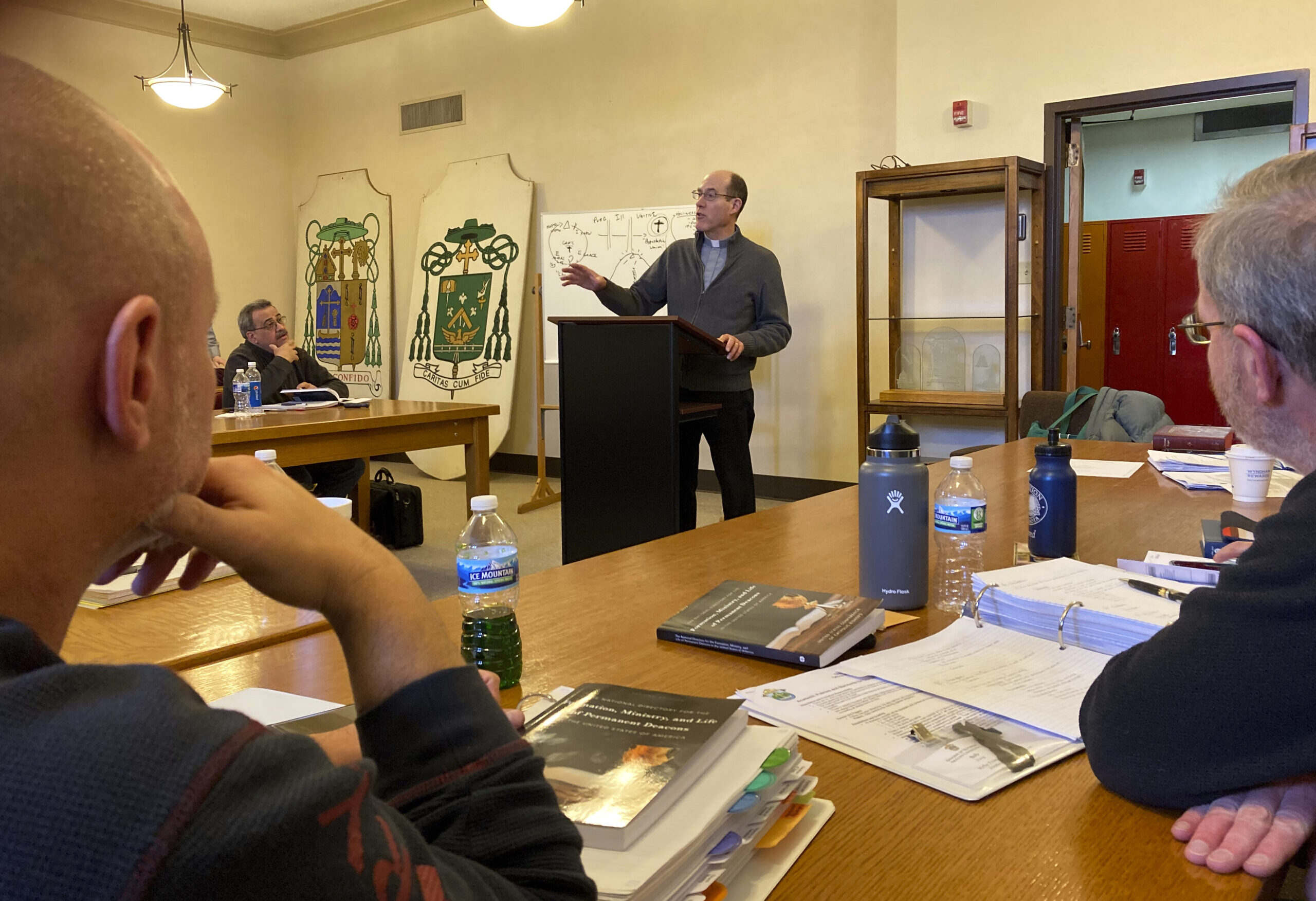 Deacon Jerry Rynda was ordained to the diaconate on Jan. 27, 2007. However, his path to the diaconate began many years before when he was just a youngster attending Most Holy Redeemer Catholic School in the farming community of Montgomery, Minn. located southwest of the Twin Cities.

“I remember the seeds of the diaconate calling me sometime between the fifth and seventh grade,” said Deacon Rynda. “During recess, I just wanted to go into church. So, I did. Instead of having some deep spiritual experience—I asked myself, ‘Well, now what do I do?’ I just walked around and straightened up the books in the pews. Yes—that would be the deacon thing to do.”

When Deacon Rynda was in the eighth grade, he recalled his parents becoming involved with charismatic renewal. They invited him and his five siblings to participate in the renewal. He said, “I started doing that and had a more personal encounter with Jesus Christ. I made a commitment to pray and read the Scriptures every day, which I have been doing ever since.”

The Lord kept calling. “When I was about 16 years old, I thought I heard the Lord say, ‘I want you to serve me with your life.’ I didn’t know what that meant or what to do. I started looking at options.” He decided to go to St. John Vianney College Seminary. But after a semester, he realized, being a farm boy, he was just not ready for more school. So, he went back home and farmed with his father.

Again, the Lord called. It was three years later. Deacon Rynda recalled, “I just felt the Lord was moving in me to do something different. Two of my brothers wanted to farm. I thought why not move away.” Deacon Rynda’s uncle, who lived east of Prescott, was a leader of a Christian men’s household. He invited Jerry to join them. As a result, he decided to move to Prescott at the beginning of 1981. Once there, he thought, “Yes, this is where the Lord wants me to be.”

Deacon Rynda worked at various jobs and saved his wages. He wondered what he should do with his money. Should he buy a car or take a trip to Europe? Once again, he thought he heard the Lord say, “Why don’t you go back to school?” He recalled, “I laughed at the idea. But I went home and shared the thought with the men in the household and they too, thought that might be the Lord speaking to me. I ended up enrolling in UW-River Falls. I went to spring trimester and took the summer off to discern and decided to go into business administration with a minor in professional writing.”

The pastoral ministry for a deacon is actualized from the threefold ministry of proclaiming the Word of God, serving at the altar and through the ministry of charity.

During his last year at UW-River Falls, Deacon Rynda participated in an internship with a local bank in Ellsworth. The internship ended up being a seven-year job and enabled him to finish his college courses. Subsequently, the bank he worked at was bought out and he moved on to bank underwriting insurance in Saint Paul.

Deacon Rynda met his wife, Patricia, at a charismatic prayer meeting in Hastings, Minn. They have been married for 35 years and have a son and a daughter. He said, “I kept thinking about the call to the diaconate. My wife says that when we were dating, I had mentioned becoming a deacon. I don’t remember saying that, but the desire to serve the Lord, to live out His call for my life was there.”

Several years after their marriage, Deacon Rynda considered enrolling in the Diocesan Lay Ministry program, which was a prerequisite to the Deacon Formation Program. It seemed like the time was right. He and Patricia had one son and had applied to adopt a child, but the birth mother had decided to keep the baby. Just before, he had told the Lord, “If this adoption doesn’t work out, I am going to sign up for the Lay Formation Program. So, once the adoption fell through, I signed up for the program. Shortly after, we got an unexpected call, ‘Would you like to adopt?’ We did. Now what? I had signed up for the course. Patricia said, ‘Well, this might be a good time.’ So, I ended up doing it.”

Following completion of the Lay Formation Program, Deacon Rynda was hoping to enroll in the diaconate program. However, the program was suspended while it was being reevaluated. Eventually, the program was reactivated with new norms and requirements and Deacon Rynda and Patricia attended an informational meeting in La Crosse. He recalls the meeting: “I sat there and listened to all that was going to be demanded of us, the first class to go through the revised program. It then included completing a Master of Theological Studies Program being held at St. Peter Parish in Stevens Point. Hearing all that was involved, I had two kids, a job, and it had been a while since I was in college, I felt overwhelmed. After the session was done, I said to my wife, ‘Let’s get out of here.’ I asked her to drive the two hours back home. I slumped down in the passenger seat and wanted to hide because the Lord was calling me one way and I wanted to go the other. As we drove home, my wife encouraged me and said, ‘You’ll never know if you don’t give it a try,’ and I kept on looking at the mountain of time required—oh, my goodness. After I got home, I talked to a few people, among them a deacon and my uncle who always was a spiritual adviser to me, and all advised me to give it a try. So, I did. I signed up for the program beginning in September of 2002.”

As Deacon Rynda suspected, completing the master’s program and the other requirements of the diaconate program was, at times, tough, really tough. Deacon Rynda said, “By this time, I was working as a business administrator at a private Christian high school. I’d work there during the day, come home at night, do my evening prayer, eat supper, hit the books. Some days were set aside for diaconate formation and pastoral field education work. One weekend a month, we would spend in formation at Stevens Point. Despite the rigors of the program, it was so very rich. The Lord was with us through it all. He gave us strength and grace.”

Following his ordination, Deacon Rynda was assigned to St. Joseph Parish in Prescott, where he lives, and has been there ever since. He still works in Eagan, south of the Twin Cities, where he is the business administrator at Trinity School at River Ridge. At his parish, Deacon Rynda does the things that deacons normally do, such as assist at Mass, weddings, funerals and committals. He conducts RCIA programs, takes Communion to people who are homebound and visits nursing homes. Before going to work, he also assists at morning Mass at St. Joseph Parish in West St. Paul, which is a few miles from the school where he works.

Several months after his ordination in 2007, he was approached by the La Crosse Diocese to take over the role of coordinator of the Pastoral Field Education Program. As coordinator, Deacon Rynda helps the men in formation develop their own special skills, increase their level of spirituality and hone their intellectual will to make them a better person. “We take these men with certain skills, intellectual, spiritual and human, develop them and then put them in situations where they can gain pastoral experience. The pastoral ministry for a deacon is actualized from the threefold ministry of proclaiming the Word of God, serving at the altar and through the ministry of charity. I give them certain parameters that they need to work with. The goal is to help the men, and the formation team, to recognize the gifts and abilities of men in formation to determine whether those gifts are developing appropriately.”

Once a man reaches the candidacy stage of formation, the Pastoral Field Education Program is divided into six modules of five months each. Each module focuses on learning experiences and pastoral leadership within a particular realm of pastoral service. Each candidate has a priest who is their pastoral supervisor. They meet at least once a month to review implementation and progress of activities that have been agreed to and to also discuss the candidate’s theological reflections. The six modules of parish experience are 1) catechesis and evangelization; 2) ministry to marriage and the family; 3) pastoral care: ministry of charity; 4) parish structures and administration; 5) independent practicum; and 6) sacred worship.

An important, perhaps the most important, aspect of the diaconate program that is not to be underestimated is the process of discernment—for a man to be aware of what the Lord is asking of him and to respond appropriately as a true servant of Jesus Christ. In the Pastoral Field Education Program, Deacon Rynda helps the men do this as they complete theological reflections on their pastoral experiences. These reflections are done much like the Daily Examen, a technique which was first described by St. Ignatius Loyola in his Spiritual Exercises. Through these reflections, the men become aware of the Lord’s presence in the pastoral situation and learn how to recognize what Jesus is teaching them through their experience.

Deacon Rynda said, “When I became a deacon, I was not expecting to do this [coordinating the Pastoral Field Education component of the diaconate program]. I tried to become aware of the spiritual movements in my life where the Lord has been able to use me in this role of helping men to be formed and for them to become more spiritually aware, going deeper in their relationship with Jesus and in their ability to see Him present everywhere in their lives. It is just so rewarding for me, such a blessing, to serve God in this way.”

Story by Robert Rogers
Published in the Sept./Oct. 2022 issue of Catholic Life Magazine

Men who are interested in learning more about the formation, life and ministry of the deacon should contact Deacon Bryan Hilts, director of the Office of the Diaconate: [email protected]