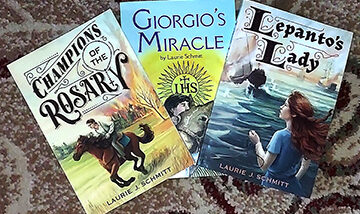 Laurie is inspired to venture into writing children’s books

Laurie Schmitt, of Sacred Heart Parish in Elmwood, has found herself in a new season of life. “For years, our household was so busy, with a home business and homeschooling,” she shares. “We have seven biological children and two by way of adoption.” Their oldest is in his 30s and the youngest in his teens. So now, as Laurie and her husband Joe’s older children begin their lives, careers and vocations outside the home, their own lives and schedules look a bit different. Joe and some of their sons continue to run the family business—farming, farm tractor repair and part sales—and Laurie has delved into some new opportunities, responsibilities and hobbies.

For Laurie, life isn’t necessarily less busy, it is just full in different ways than it once was. This is exemplified in her prayer life: “When my kids were little, we prayed the rosary every morning,” she recalls, “but it seemed impossible to have a private prayer time. I kept praying for time to pray, and now, that prayer is answered. I begin my day praying the Memorare for a few of my favorite priests, including my son Father Levi Schmitt. The Divine Office and the Stations of the Cross have become my mainstay over the past few years.” Laurie has also become a caretaker for her mother and helps with her two grandchildren, her “grand prizes,” as she calls them, whenever she gets the chance. There is always a little time for taking up her hobbies of biking Wisconsin trails, cross country skiing her farm fields and making homemade wine.

The biggest change for Laurie came a bit unexpectedly. After the adoption of her two boys, she went on to earn a master’s degree in Catholic theology, with a special emphasis on Catholic culture. During this time, she was also completing the Marian Catechist Program at the Shrine of Lady of Guadalupe in La Crosse, which emphasizes both the contemplative and active parts of living the Catholic Faith. The contemplative aspect fosters a deep prayer life—and the active part challenged Laurie to expand her call to live the Faith. For many years, she and a friend led a Marian youth group at their parish and she also taught CCD, but now as she was stepping away from those, she prayed about where the Lord was calling her. “I discovered that the Marian Catechists encouraged writing as an apostolate, [and] I felt drawn to give it a try,” Laurie shares.

I discovered that the Marian Catechists encouraged writing as an apostolate, [and] I felt drawn to give it a try.”

“I completed my degree and the Marian Catechist Program within a few months of each other, and one day, as I was praying before the Blessed Sacrament, I wondered how to bring these two things together. Looking at Jesus in the Eucharist, I imagined a book for children about a eucharistic miracle. I had Joan Carroll Cruz’s book in my hand and came across the 1453 miracle of Turin. So, this was my new project, but now my prayer became, ‘And where in the world am I going to find time for this?’” During this time, Laurie’s mom had four strokes. She recovered without any health issues, but she needed a week of home care after her release from the hospital. “So, I packed up my laptop, my prayers and goals and camped at her house for the week. When she was napping during the day, and after she was safely snug in her bed for the night, I would write. My goal was super simple: to develop an outline, to get to know the characters and scratch down 50 words per day. … By the end of the week, I had 900 words—hardly enough for a chapter book! For the next few months, I stayed diligent and, eventually, I had a story of more than 10,000 words. I pitched ‘Georgio’s Miracle’ to Marian Press and they liked it. This was the biggest shock of my life!”

During these early days of writing, Laurie shares, “I was focused on discipline and courage, [which] I suppose are a few of the basic virtues for undertaking anything.” These virtues have been a fruitful foundation of her efforts, as two more books have since come to publication and five more are in the works! But the process was not work for the faint of heart.

“Someone told me once that writing a book is like having a baby,” Laurie laughs. “Well—and I say this from experience—it’s not. As a general norm, babies show up within an average nine-month time frame. Even our adoption process was accomplished in less time than it takes ‘to have a book.’ It can take two to three years for a book to progress from the idea stage to the ‘put it on the shelf’ reality. So, as with all else, I rely on Divine Providence and do my best to keep up with mini goals—monthly, weekly and daily tasks. This keeps the project inching along.”

“Even though my time for writing has opened up over the past few years, my vocation and family life come first, so I do the best I can to keep things in balance. I look at creative writing as a fun, challenging hobby, one where I can develop my talents and give glory to God.” It is Laurie’s family and her journey, along with her continued learning about the Faith, that have shaped the ideas and inspirations for her books.

“I love reading about miracles, angels, saints and Catholic history and tradition,” Laurie explains. But it was from her own journey that her second book grew. “‘Champions of the Rosary’ was inspired by the Our Lady of Good Help apparition in Champion, Wis. I was born and baptized in the Green Bay Diocese, so learning the background of the story was especially interesting to me. It was easy to visualize the people and the scenery. While researching, I wondered if any of my distant relatives of the time made it to the shrine on the night of the Peshtigo fire.”

Laurie’s third chapter book, “Lepanto’s Lady,” inspired by Chesterton’s poem “Lepanto,” brings to life Our Lady of Victory’s role in the great battle through a holy young girl trying to rescue her dad from pirates. “Kids today need to know that Faith and family are what we’re fighting for,” she shares of the message that is evident throughout all of her stories.

Laurie is now working on a number of picture books, set to be released this year and in 2023. “Catholic Princess Saints” is about girls who are queens and are canonized saints. “The book’s message is that no matter how little you are or how great the obstacles you may be facing, or what your duty is in the world, you are called to give everything back to God, for His glory, and for the sake of those in your care.”

She is also excited about her upcoming picture book series entitled “Someday Saints: America’s Blesseds, Venerables and Servants of God,” which tell the stories of people who are a part of American history and also on their way to becoming canonized saints. The first book features three men with ties to our own state: Blessed Solanus Casey, Venerable Frederic Baraga and Venerable Samuel Mazzuchelli. The second shares stories of two men tied to our diocese—Father Joseph Walijewski and Brother James Miller, as well as Father Stanley Rother of Oklahoma, all of whom were missionaries to Central and South America, a region close to Laurie’s heart, as her two adopted sons were born in Guatemala. “These someday saints overcame obstacles by prayer, fasting and persevering in their vocation,” Laurie says. “Their virtuous lives and heroic example left a mark in America’s history through the missions and churches they founded and, more importantly, in the lives of the people they served.”Laurie’s stories focus on Catholic history and tradition and encourage personal holiness and holy vocations to the priesthood and religious life with characters to whom readers can easily relate. All of her books have received the imprimatur. If you are interested in making Laurie’s stories a part of your home collection or giving them to your grandchildren or godchildren as gifts, you can find them at laurieschmitt.com. They make for great family read-alouds or can even supplement homeschool or Catholic school curricula. “My hope,” Laurie shares, “is that young readers will be inspired to grab hold of their Faith and live it to the fullest.”

Story by Amy Eichsteadt
Published in the Sept./Oct. 2022 issue of Catholic Life Magazine