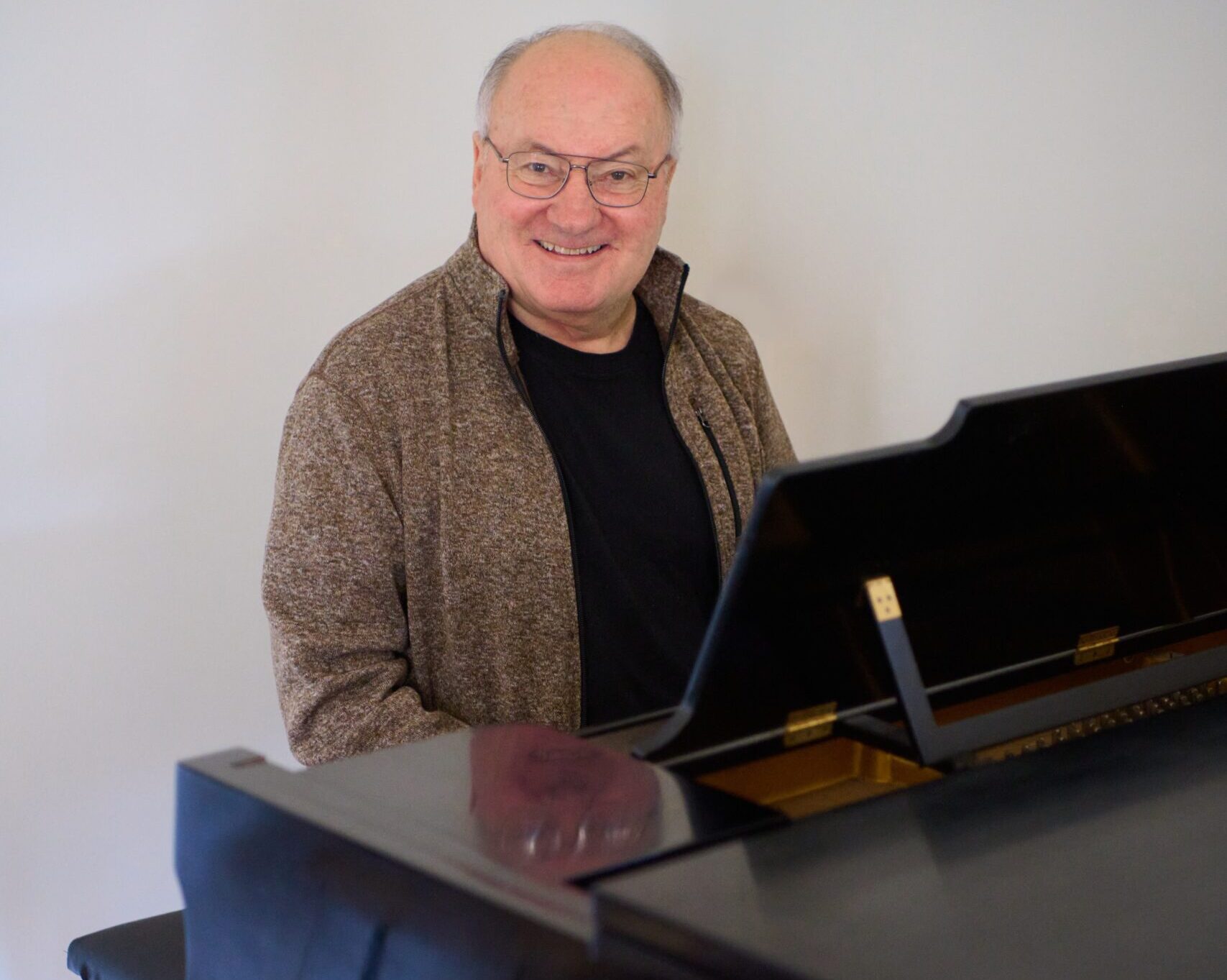 Faith and Music Help Dan Recover from a Sudden Illness

Music has always been an important part of Dan and Moira Kneer’s life. “We both come from musical families and live by the old adage, music is praying twice,” Moira says with a smile. So, it’s not surprising when Dan faced a life-threatening health crisis two years ago, the couple would turn to music and Faith to help him through his long road to recovery.

Dan started playing the piano when he was just 8 years old. “I had my first piano lesson in third grade with Sister Eulogia at Sacred Heart School,” the Eau Claire native remembers. By the time Dan was in high school, he also began playing the organ. “I accompanied my first choir in 1965 and continued to do that for the next 55 years,” Dan says.

Dan and Moira, married 43 years, first met at choir practice and quickly discovered a mutual love of music. Both are blessed with beautiful singing voices and generously share their musical talents at their parish. “We’ve always been grateful for opportunities to sing together,” Moira says.

Two years ago, Dan noticed some concerning changes in his stamina. “I went to a cardiologist because I was really tired all the time and couldn’t even walk around the block,” he says. He had a heart catheterization on Dec. 12, 2020, and some major blockages were discovered. “What started as a somewhat simple procedure turned into having triple bypass surgery two days later,” Moira says.

The day after the major surgery, the nurses had Dan up and walking the hallway. “All of a sudden I felt really tired and just collapsed,” he explains. He was quickly returned to his room but lapsed into unconsciousness for the next five days.

“The doctors weren’t certain what caused his collapse and unconscious state. They suspected it was some type of a neurological event, but it wasn’t presenting as a typical stroke,” Moira says. “I would spend hours by Dan’s bedside, telling him that he needed to wake up and move his arms and legs.” He didn’t respond until the evening before Christmas Eve, when he finally moved his big toe. “The whole medical team came in and were discussing the chances of a full recovery,” Moira remembers. “That’s when one of the doctors said, ‘This man will never play the piano again.’ I was so angry. He couldn’t know that diagnosis for certain.”

Dan’s condition didn’t improve much over the next few days. He was only able to move his left arm and wiggle his toes on both feet. He was unable to summon the strength to sit up or move, and a feeding tube was placed to keep him nourished.

I could hear Monsignor Klimek’s voice in my head saying, ‘We’ll just take each day as it comes, one day at a time, and see what God has in mind.’” – Moira

Moira decided to reach out to her friends and family on Facebook, asking them to “storm heaven with prayers.” The response was amazing. “I received hundreds of messages,” she says. “I read every single one to Dan, so he knew how many people were praying for him.”

“The day after Christmas, Dan began talking a little,” Moira continues. “I knew that music interacts with your brain in a unique way and would be key to his recovery. So, we started to sing every day—old timey songs and church songs.”

Moira also knew they could utilize Dan’s love of playing the piano as physical therapy. “I wanted to get his fingers on a keyboard as soon as possible, so I brought a toy piano to his hospital room,” Moira says. “I had to hold his right arm up because he couldn’t do so himself. It was a struggle for him to play even a few notes.”

Dan continued to make slow progress, and by the new year, he was moved to the hospital’s rehabilitation floor. “I had every kind of therapy you could imagine,” he says. “Physical, speech, occupational. It was very tiring, and I felt a little discouraged.”

By this time, the doctors diagnosed that Dan had experienced a serious “watershed” stroke after his heart surgery. “This type of stroke happens at the very endings of the blood vessels of the brain, not just one side or the other,” Moira explains. “That’s why Dan’s deficits were abnormal and difficult to diagnose.”

Moira and Dan knew they were facing an uphill battle. “I didn’t look too far down the road,” Dan shares. “I had no idea what was coming next.”

Moira says she remembered words of wisdom that the late Monsignor Edmund Klimek, a beloved hospital chaplain and Moira’s mentor, would offer to people going through difficult situations. “I could hear Monsignor Klimek’s voice in my head saying, ‘We’ll just take each day as it comes, one day at a time, and see what God has in mind,’” Moira shares. “Remembering his words helped us so much. It was almost impossible if we started thinking beyond the present. It felt overwhelming.”

The Kneers experienced a small but uplifting miracle on the feast of the Epiphany.
“I went to Mass and then came to visit Dan,” Moira says. “I told him we sang all the verses of ‘We Three Kings’ at Mass, and Dan started to sing the song. Up until that point, he hadn’t been talking very well, but he sang all four verses! I was hard pressed to remember all the words, but there he was, singing them all from memory!”

Dan says it was grueling to go through months of intense therapy. “When I first went to the rehab floor, I would see other people toddling down the hallway with their walkers and think, ‘I would never be able to do that.’ Just to get upright and stand was a struggle,” he admits.

With a lot of perseverance and the power of prayer, Dan took a huge step toward recovery in early February. “I was finally able to walk down the hall for the first time,” he remembers. “I had a walker and four nurses on either side to help me. The whole staff cheered! No one really thought that was ever going to happen.” On Feb. 5, Dan left the hospital to continue his therapy at Prairie Point Rehab in Altoona.

Moira brought Dan’s regular-sized keyboard to the rehab center so he could continue to practice the piano. “I brought some very simple, beginner Mozart piano arrangements so he could relearn how to play piano with both hands,” Moira says. “It was a struggle, but he played.”

Dan—an accomplished pianist—admits he felt frustrated. “I was pretty angry that I couldn’t play like I did before the stroke,” he says. “I had always presumed I’d be healthy and took it for granted. Now I had to learn to adapt.”

For the next two months, Dan continued to work hard, struggling to do tasks that had once seemed simple. “I think Dan’s determination shows that there are too many people out there who are quick to throw up roadblocks, saying, ‘You can’t do this or that,’” Moira says. “You can’t write people off so easily! God has a plan. If He wants you to do something, then you’re going to be able to do it.”

Moira was relentless in helping Dan through his ordeal, offering him love and encouragement every day. “I’m fortunate that Moira took her ‘in sickness and in health’ wedding vows seriously,” Dan says. “I’m afraid a lot of people don’t, and I realize how very lucky I am.”

After months of intensive therapy—and against all odds—the day finally came for Dan to leave the rehab center. “He came home on April 20—125 days after his ‘routine’ heart catheterization,” Moira says. “Our plan had been that he would have the heart surgery and be home before Christmas. They say if you want to make God laugh, tell Him your plans!”

Dan reached another big milestone on Christmas Day 2021, when he played the piano at Mass for the first time since his stroke the previous year. “I played two songs and was very nervous, but the congregation gave me a standing ovation!” he says with a smile. “I find that playing in public still bothers me, but it gets a little easier every day.”

Dan has slowly begun to return to his normal routine. He sings in the church choir, plays piano for parish funerals and hopes to once again accompany choirs on a regular basis. He has also returned to performing with the Chippewa Valley’s premier chamber ensemble, The Master Singers.

Moira says she believes Dan’s recovery has been a great encouragement for those going through similar situations. “There are no guarantees in life that we’ll always be healthy and happy. Seeing other people on the journey, like Dan is, gives them hope. That’s what the key word is in all of this—hope,” she says. “When things seem insurmountable, just take one step at a time. Do your best each day, and it will come.”

Moira pauses and Dan adds, “You may have to fall down a few times, but that will make getting up even more sweet.”