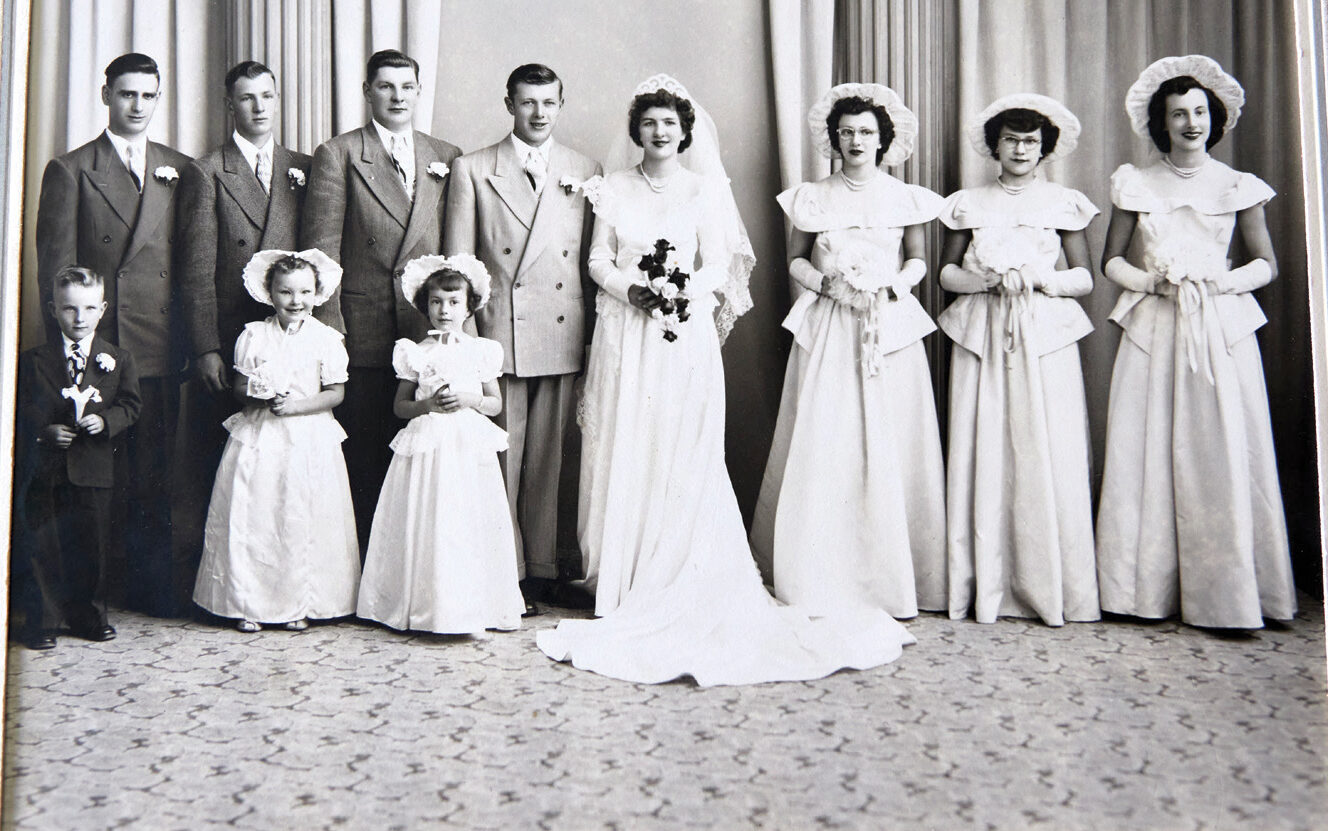 St. Wenceslaus Church was the setting where Peter and Annette (Nettie) Beaver renewed their marriage vows on Sunday, May 15, 2022. Father Mariapackiam Pitchai-Savari (Father Packi) led the couple in reciting the familiar words of fidelity and love and invoked a blessing upon their marriage and all those who joined the happy pair at Mass.

Peter was 20 and Nettie 17 when they wed in 1952. It was the year in which Dwight Eisenhower was elected president over Adlai Stevenson by a wide margin and the Republicans gained control of the White House and both houses of Congress. The Korean War continued after truce talks failed; the former Princess Elizabeth of Britain was crowned as queen. It was a year when 3,300 died of polio in the U.S. and 57,000 children were paralyzed (prior to the Salk vaccine being developed in 1955); and a year when a dozen eggs cost 25 cents and gas for your car cost 25 cents per gallon and where the attendant would clean your windshield and check your oil to boot. It was a year when Peter and Nettie were extremely happy and the cares of the world paled in comparison to the love they shared.

Hearing Peter’s life story, one cannot help but marvel at God’s plan for the Beavers. It is a story that could have been very short with no wedding, or life on earth for that matter. “My mother died in childbirth,” Peter said. He continued, “My aunt told me what happened because she was taking care of my mother when I was born. The doctor slapped me on the bottom. There was no response, so he said, ‘He’s dead,’ and he threw me in the crib. In doing so, the bone in my upper leg broke and then I started to cry. The bone eventually healed with no lasting effects, but I did not walk until I was 17 months old.”

As if losing his mother at birth was not enough in young Peter’s life, he lost his father as well. Peter’s father never fully recovered from a poison gas attack he suffered in France during World War I. That, combined with the death of his wife, was more than Peter’s father could endure and, consequently, he took his own life, which left Peter and his two older sisters orphans.

Although Peter was born in Loyal, he and his two sisters were raised by their grandparents, who lived in Auburndale, following the death of his parents. Peter said that despite losing his parents, growing up in Auburndale turned out to be very fortunate for him. “I grew up in Auburndale and so did Nettie. We attended St. Mary School together. She was a few grades behind me. That is where I got to know Nettie and her family. My older sister married Nettie’s brother.”

Nettie and her four brothers and a sister grew up on a farm in Auburndale. Peter and Nettie both agreed that the foundation of their Faith was built on the strong Faith commitment of their respective families and their parish priest at St. Mary Parish in Auburndale, Father Joseph Steinhauser. Peter recalled that Father Steinhauser built the church, baptized him and presided at their wedding.

Nettie got to know Peter through her older brother, who was married to Peter’s sister. Peter said, “I would hunt and fish with Nettie’s brother so there were many occasions where I would see Nettie.” Peter and Nettie recalled their first date. “We went to a New Year’s Eve dance on a double date with Nettie’s older brother.” Peter continued, “There were always dances on Saturday nights that we would go to with her brother and his girlfriend. Wherever there was a polka band playing, we would go. We also went to movies in Auburndale sponsored by the local businesses. It was just a movie screen set up in a parking lot.”

Following their marriage, Peter and Nettie lived in Auburndale, then bought a farm in Milladore. About 28 years ago, they moved to their present location in Milladore, which is just a short distance from St. Wenceslaus Church. They said they liked going to church on Sunday morning at 6:30 to recite the rosary. Peter said, “We rarely missed a Sunday.”

Peter and Nettie are well-known and well-liked by St. Wenceslaus parishioners. The church was filled with family and friends as they celebrated Mass and their 70th wedding anniversary. Family present included the families of their five living daughters (one infant daughter is deceased), together with 19 grandchildren and 53 great-grandchildren.

Pope Francis, in an excerpt from his “Letter to Married Couples for the ‘Amoris Laetitia Family’ Year 2021-2022,” had this to say:

“Marriage, as a vocation, calls you to steer a tiny boat—wave-tossed yet sturdy, thanks to the reality of the sacrament—across a sometimes stormy sea. How often do you want to say, or better, cry out, like the apostles: ‘Teacher, do you not care that we are perishing?’ (Mk 4:38) Let us never forget, though, that by virtue of the sacrament of matrimony, Jesus is present in that boat; he is concerned for you and he remains at your side amid the tempest.

“… It is important that, together, you keep your eyes fixed on Jesus. Only in this way, will you find peace, overcome conflicts, and discover solutions to many of your problems. Those problems, of course, will not disappear, but you will be able to see them from a different perspective.”It is because of their strong Faith and belief in the Lord that Peter and Nettie have weathered the storms of life and have been bathed in the sunshine of His love.

Story and photography by Robert Rogers
Published in the November 2022 issue of Catholic Life Magazine
Top Photo: Peter and Nettie’s wedding on May 14, 1952