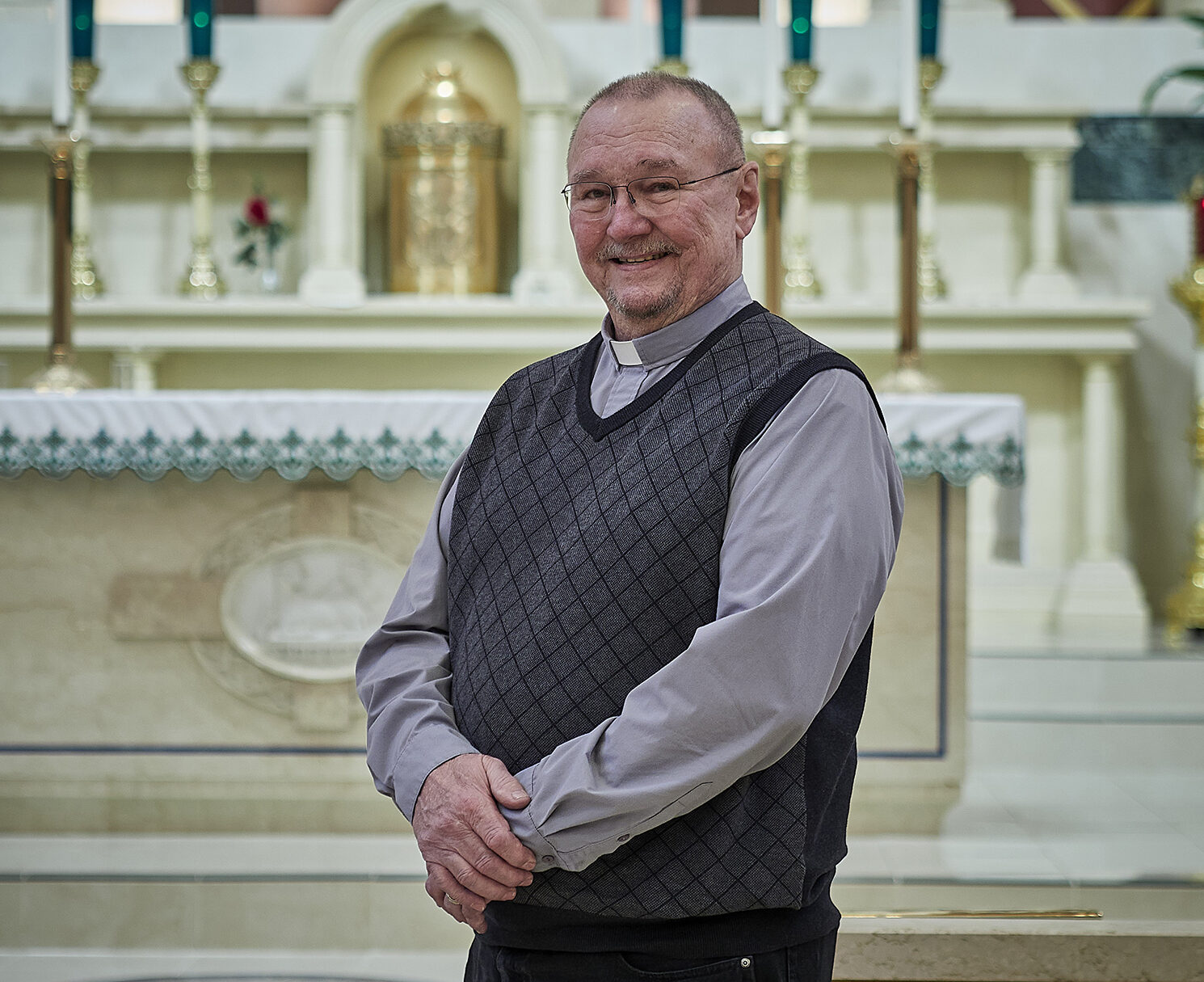 Ordained in 2012, Deacon Jerry Ruesch serves the parish community of Ss. Peter and Paul in Wisconsin Rapids. Born and raised in Wisconsin Rapids, the parish he attended while growing up was Our Lady Queen of Heaven (known locally as St. Mary’s). He attended grade school at St. Mary’s and was a server at Mass. He said, “At that time, you had to know all your Latin before you could even get near the altar. I still remember about half of it.”

“My dad was a very staunch Catholic,” Deacon Ruesch recalled. “We went to confession every Saturday and then every Sunday the entire family went to Mass. Until I went into the service [Air Force], that’s the way it was. Everybody was together. It was very nice.”

After attending and graduating from Lincoln High School, Deacon Ruesch joined the Air Force, where he remained for seven years. While he was in the service in Taiwan, he met and married his first wife, who was not Catholic. His oldest son was born in Taiwan and three years later, after he returned to Wisconsin Rapids with his wife, his youngest son was born. “I remember my dad asking me, as we were moving into our apartment, ‘Where are you going to go to church?’ I thought to myself, ‘I wanted some privacy, so rather than register at St. Mary’s, the family parish, I decided to register at St. Lawrence.’”

Deacon Ruesch started working on the production line for a division of the paper mill at Wisconsin Rapids that made plastic for countertops, where he remained for four years. He then got his apprenticeship as a pipefitter and, after the division was sold, he transferred to the Biron Mill, where he finished his apprenticeship and remained there until he retired 20 years later. Following his retirement from the mill in 2007, he worked in construction as a pipefitter.

The thought about becoming a deacon started in 2005. Several events happened in his life that he thinks led up to his considering the diaconate. The first was in 1996. After being married for 20 years, he filed for divorce and, subsequently, there was a petition for an annulment, which was granted. Two years later, he met his present wife. One requirement of becoming a deacon is that a candidate has to be married for at least seven years. However, the most significant event concerned his dad.

“If someone is considering becoming a deacon, prayerfully consider it. Do not let your previous background or the academic requirements of the program stand in your way.”

Deacon Ruesch’s father battled prostate cancer for 16 years. Early in 2005, it became evident that his father did not have long to live. Deacon Ruesch recalled, “Two weeks before he passed away, I started praying the rosary. Daily, I was praying that my dad would have a peaceful death, which he did. Later that month, Pope St. John Paul II passed away. I always had it in the back of my mind that my dad asked Pope St. John Paul II, ‘Can you do something with that boy.’ The main reason I started praying the rosary was because of my dad, but after that I just kept praying the rosary daily. I think this was a big reason that led me to apply for the diaconate. I was not sure that it was a clear call to serve, but I thought I would at least give it a try. Perhaps it was the Blessed Mother talking to me.”

In 2006, there was an invitation in the St. Bronislava Parish bulletin to attend a meeting for men who thought they might be interested in the diaconate. Jerry went to the meeting and filled out the form stating his interest. He said, “I did not know what chances I had of being accepted into the program. I was a little surprised when, three months later, I got a call and they wanted to interview me—a pipefitter—for the program.” As it turned out, Jerry was accepted.

“I started the diaconate program after not having gone to school since my high school days. Now, I had to do reading,writing and studying on a college level. Fortunately, I was able to take two or three months off from my construction work, because I really needed the time to catch up on my learning skills and to be able to concentrate on my studies.”

It was during this time of formation that Jerry’s fellow construction workers noticed a change in him, something he was not aware of. Reflecting back, Jerry recalled, “The guys would tell me, ‘Ruesch, you have changed.’ ‘Me?,’ I asked. ‘Yes,’ they said. ‘In what way?’ I asked again. ‘Well, you are not the guy you used to be,’ they said. ‘You and your language, for one, is cleaned up. The way you treat people, the way you talk to people is different.’ It was a good difference that they noticed in me. It was a difference I had not noticed in myself but was recognized by others.”

Deacon Ruesch finds serving others a particularly rewarding vocation as he does whatever is asked of him to assist Father Robert Schaller. He very much enjoys instructing people in the Rite of Christian Initiation of Adults (RCIA) program with help of other parishioners. Another ministry that is dear to his heart is that he serves as an auditor for the Matrimonial Tribunal of the Diocese of La Crosse. An auditor collects information needed as part of a marriage annulment process. This is a particularly relevant ministry for Deacon Jerry as he has firsthand experience and understands what it is like to go through the process. “People have told me I can explain things in terms they can understand,” he said.

“If someone is considering becoming a deacon, prayerfully consider it. Do not let your previous background or the academic requirements of the program stand in your way.”