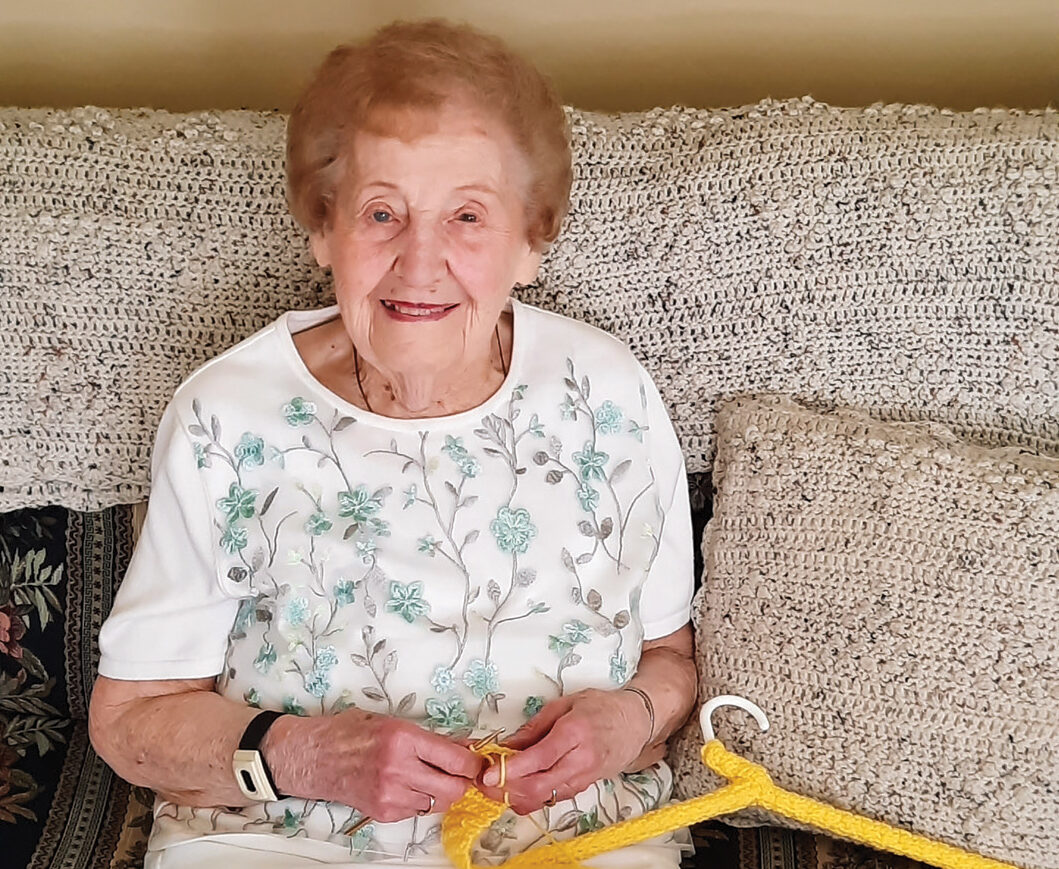 What does 100 look like? For Norma Socha (pronounced suh-huh), it looks like a life well-lived, full of laughter, tragedies, joy and sadness intertwined around the pillar of her Catholic Faith. When people ask Norma what her secret is, she says, “I just keep myself busy. I just can’t sit.”

Born Nov. 28 in Marathon, Norma grew up attending St. Mary Parish and is the youngest of five. “We always went to church. I thank God every day for my parents who taught me the Faith,” says Norma. “Church is really important. No matter where we went, I can’t remember a time, even when we traveled, that we didn’t go to Mass. We had to find a church.” Norma remembers thinking back how someday she would like to attend Mass every day because “God is at work every day of my life.”

Norbert Bingen, Norma’s older brother, was ordained a priest in 1936 at St. Mary Church in Marathon. After his ordination, Father Bingen served in Athens for four years and then was assigned to teach at Aquinas High School in La Crosse. “He was going to start his fifth year of teaching when he needed a minor operation.” Soon afterwards, he wasn’t feeling well and went back to the hospital. He had pneumonia and later was found to have life-threatening blood clots. One of his friends contacted Norma’s mother and told the family to come in to say goodbye. Norma laments, “We were there at 6 o’clock and by 11 o’clock he died. He was only 33 years old.” When anyone wants to know about Norma’s own Faith and proud moments in her life, she lovingly first shares the story of her brother/priest, Father Norbert.

God has given me a healthy life so I still have a chance to give back to Him … I will do these things until the day He calls me home.

During high school, Norma found a way to go to basketball games. “I wouldn’t ask my mom for 10 cents to go because I knew money was tight. Instead, I tried out for cheerleading so I could go to all the games for free,” Norma says with a smile. “Even the away games. That was fun!”

When she was 17, she went to prom with a young man from Edgar and some friends. Her future husband, Leo, was also at prom. At an after-prom gathering, Leo asked Norma to dance. That was the first time they spoke, but they didn’t get to dance that night. Later, both dating someone else, they would frequently run into each other. Finally, they danced together and Leo asked her out. “He gave me a diamond before leaving for the service,” says Norma.

In January of 1946, Leo returned from the war and he and Norma got married on May 29. They moved to Edgar, joined St. John the Baptist Parish and ran a bar and later a supper club for many years. They raised three daughters, Carol, Kathy and Tammy. “Leo always said he never had trouble with his girls. They always obeyed in church, but this one Sunday, when the girls were little yet, they were misbehaving and crawling around. Leo didn’t say a darn thing but when we got home, he said, ‘Well girls, you didn’t behave in church so now you’ve got to kneel down on the bare floor and you can’t get up until you say you’re sorry and you’re going to behave yourself in church,’” Norma recalls. “It didn’t take long, and Kathy was sorry, but I thought Carol was going to miss lunch!”

When Tammy was in kindergarten, a teacher noticed some social and behavioral differences in her and brought them to Norma’s attention. Doctors told Norma that somehow a part of Tammy’s brain suffered some form of damage and, although she wasn’t mentally handicapped, she would not be able to attain a higher level of learning. Tammy continued to attend school and took classes as she was able. Although she didn’t get a G.E.D., “in her mind, she graduated,” says Norma.

“Tammy always went to class reunions and kept up relationships. She could take care of herself,” Norma lovingly explains. “She was a social butterfly around town. A very happy person.” But when Leo died, Tammy suffered a nervous breakdown. Medications that had previously helped her have a stable demeanor were discontinued. Trying to find a new medication that would work became frustrating. Finally, after two weeks at a local health care center, Norma says, “She was just like new.”

Then, in 2019, Tammy went in for necessary gallbladder surgery but complications arose. “Every day she got worse,” Norma said. “Tammy wouldn’t eat and she began hallucinating.” Kathy drove up to stay with Norma and, along with sister, Carol, spent their days with Tammy in the hospital. Prayer and going to Mass every morning were the only things that sustained them through this most difficult trial. “When I knew she couldn’t get any better,” Norma says, “I prayed to God He’d take her home and He answered my prayers.” She died in September 2019 at age 57. Tammy’s Facebook page lit up with well-wishes and remembrances by all who knew her and would miss her.

“It wasn’t until I retired and was able to go to church daily that I really got close to God. I knew going to church every day and spending time with God was what I wanted to do. Whenever I spend time in church, I always first look at Jesus on the cross and tell Him how much I love Him and how important He is in my life. I thank Him for all the blessings He has given me,” Norma says. “Receiving the Eucharist is very special. When you go up there to receive the body of Christ, that’s something to think about.”

In retirement, Norma says, “I started doing things for the church, doing whatever I could.” For the past 25 years, she’s baked pies and desserts for St. John’s Friday night fish fries, earning the nickname “The Pie Lady.” She also likes to bake muffins and store them individually to treat herself or pull them out when guests arrive. At Christmastime, she makes homemade candy, giving it away to others in town.

“After Leo died, Father Thomas Rudolph, our pastor at that time, called me and asked if I would do the church laundry,” Norma says. “Oh, I was happy to hear that because I didn’t have nothing to do and I was so lonesome sitting here. I love doing it. And I’m still doing it. I will never quit.” She even made new linens and altar cloths. “When our new pastor, Father Thomas Huff, asked, ‘Who does the laundry?’ they pointed to me.” Father Huff proceeded to take off his cassock right in front of everyone and handed it to Norma. “I never really washed (priests’ garments) before, but he pointed out a couple spots and I thought, ‘OK,’ so I washed it and it turned out,” Norma says with a laugh. That was the only time she washed a priest’s garments, but now, under Father Alan Wierzba, Norma still continues to launder the church linens once a week.

Recently, she began doing puzzles. “I gotta keep myself busy,” she answers in regards to why she can maintain a sharp mind and remain in good health. A group in town drops off a circulation of puzzles for people at home, writing their names on the box so no one gets the same puzzle twice.

Another of her beloved hobbies is crocheting colorful yarn coverings for heavy duty plastic hangers. “I make really nice hangers. You can use them for slacks, sweaters—they work for everything. I make them and give them away.” Her older sister, Margaret (102), also enjoys crocheting. “When we order two cases each, we get free shipping,” Norma explains. Over the years, she has crocheted many beautiful afghans for her grandchildren, godchildren and other relatives and friends. She also donated many of them for church raffles.

Norma doesn’t use a walker or cane and her quaint house is tidy and organized. “I don’t have arthritis,” Norma says, flexing her hands. “I don’t have many wrinkles,” Norma laughs. “Every day, you gotta put some cream on your face.” She still drives herself around town: to church, the beauty shop, the bank, the grocery store. “I don’t care how old you’re going to get, but every year it gets a little harder to do the things you like to do.” Working fish fries, doing church laundry and her other hobbies have kept Norma busy and connected to the Church. “God has given me a healthy life so I still have a chance to give back to Him—even at my age. God willing, I will do these things until the day He calls me home. I love my Lord and my Church,” Norma explains. “I’m glad I’m Catholic, that I know.”