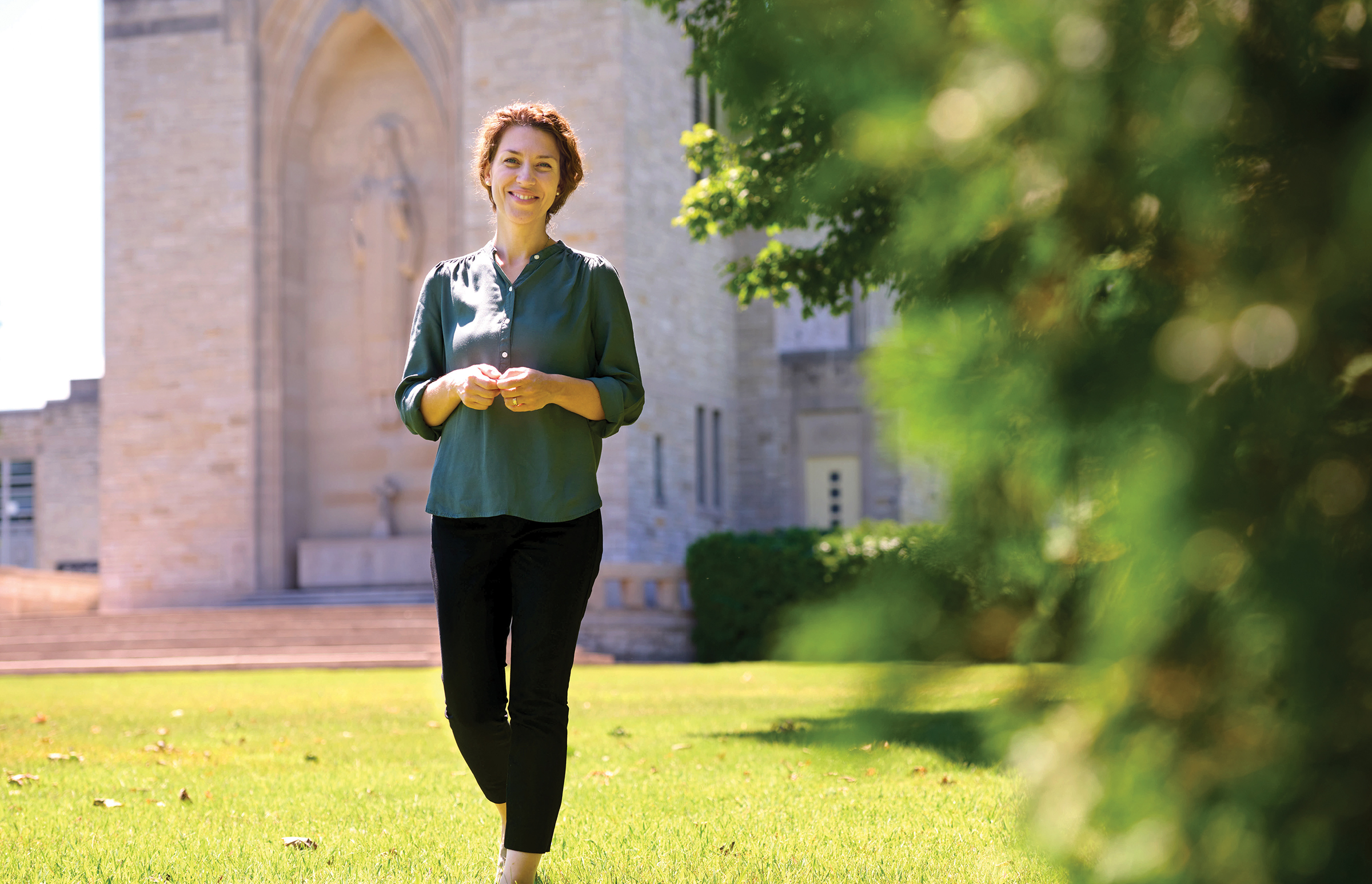 God helps her care for her homeland of Ukraine

Coming to America at age 18 from Zaporizhya, Ukraine, Valentyna Pavsyukova, who now resides in Fairchild, had no idea that in little more than a decade she would begin a Catholic ministry to care for the people of her birth country. Although not a Catholic at that time, Valentyna carried in her heart the Our Father prayer, a gift from her grandmother, Vera, to guide her through difficult times in life.

Valentyna arrived in Wisconsin after winning the United States green card lottery in 2001. She spoke no English and knew no one.

Praying the Our Father helped her through the loneliness and fear of living in a new and strange place and led her straight into the arms of her beloved Heavenly Father. She was drawn first to reading the Gospels. Then God brought Valentyna to holy Mass through the invitation of a co-worker.

She felt the true presence of Christ in the consecration and she knew that whatever was happening on that altar was real. In 2007, after completing the Rite of Christian Initiation of Adults (RCIA), Valentyna was received into the Church at the Easter Vigil.

In the Catholic Church, Valentyna felt at home—a sanctuary denied to her and her family in Ukraine because of the Soviet regime’s persecution of religion. The power of her Catholic Faith was a blessed discovery for Valentyna and she was on fire to share this joy with her family and friends in Ukraine.

“Think of how God created everything for a little human person. He created us so we can know Him, so He can love us, and we can give Him our love in return,” Valentyna says. “We know there is a love that exists to death, and we will go so many different directions to try to find that love. In the sacraments, we receive so many responses to all our questions.”

Valentyna worked and prayed to find a way to bring God to Ukraine. She knew Faith was the foundation, but God wanted her to put that Faith—and His love—into action.

“My Faith grew in a tremendous way. Faith is not something I just contemplate,” says Valentyna. “We don’t live our Faith just in our contemplations. Our Faith must become incarnate through Jesus.”

A return to her homeland of Ukraine allowed God to guide her to the mission she was meant to carry out for Him—providing the people of Ukraine with medical assistance wrapped in the Catholic Faith. Thus, Chalice of Mercy was born and continues 15 years later in its mission.

“Everything that I have lived during these 15 years with Chalice of Mercy, it definitely has become my life completely. I wanted my people to know God as a merciful and loving Father through everything we do in the mission,” Valentyna explains. “This mission is a love story between God and me, including how this love is supposed to be given and shared with others. It is through the mission of Chalice of Mercy that He wanted to communicate to me His love. God the Father wants us so deeply to be united to Him through the Heart of Jesus. I have also learned through 15 years of missions that we are not just ‘instruments’ in God’s hands. It sounds humble to be an instrument, but that is the wrong way of seeing. Truly, we are sons and daughters of our heavenly Father. He deeply loves you and me, and when we receive the body of Christ, we are literally living inside of the Holy Trinity. This has been my realization after so many years of work.”

Valentyna wanted Chalice of Mercy to be a mission that defends the dignity of life from the moment of conception until natural death, especially since decades of Soviet rule had eroded respect for human life to the point that abortion had become routine in Ukraine. Keenly aware of this, in 2011, Valentyna began to organize pilgrimages of Ukrainian OB-GYN doctors to Medjugorje, in Bosnia-Herzegovina, a holy site of profound prayer and conversion.

To date, more than 1,500 doctors have participated, with life-changing effects. The result is that, through their hands, countless children have been birthed into life rather than put to death by abortion.

In 2014, Ukraine was invaded by Russia, which forcibly annexed Crimea and occupied other regions of Ukraine that bordered Russia. Earlier this year, Ukraine again experienced a Russian invasion, but this time one of much greater scope.

“On Feb. 24, my country was attacked with bombs and missiles from different sides and different cities at the same time including our capital, Kiev,” said Valentyna. “Horror was everywhere. Russian soldiers destroyed cities, villages, hospitals, schools, kindergartens and infrastructure. They raped women and children and stole or destroyed everything in sight. It was horrifying. I felt paralyzed thinking about my people, my family, my friends, and at the same time I knew that I must do everything I could, and that God would help with the rest. By day two of the war, my team and I began to organize emergency aid to be shipped to Ukraine.”

Before any shipment leaves American shores, it is sprinkled with holy water and prayed over. Holy Mass is celebrated regularly for the volunteers and for the intentions of the Ukrainians being served.

The volunteers in Ukraine, who collect and distribute the aid from Chalice of Mercy, are rarely Catholic, but they have been noticing the presence of the Holy Spirit. The volunteers tell her that soldiers and doctors who come to the warehouse to get needed supplies speak of feeling tremendous peace and want to rest in the warehouse.

“They witness God’s miracles right in front of their eyes,” says Valentyna. “No mission can be just humanitarian. Chalice of Mercy is not just humanitarian aid; we are working with the conversion of the heart. We can do all with God’s grace. We believe what Jesus has spoken to us, ‘I go to prepare a place for you.’”

The Blessed Mother also offers her help with the work in Ukraine. The rosary has become a symbol to Ukrainian soldiers. Back in 2014 when the Ukrainian people poured into Maiden Square in Kiev, launching a “Revolution of Dignity” against their pro-Russian president, Viktor Yanukovych, white plastic rosaries were distributed in the square by a priest. Then, when Russia invaded the Donetsk and Luhansk regions, the soldiers placed these rosaries around their necks as they went off to defend their homeland.

“It is really important to pay attention to what Our Lady told us at Fatima, especially about praying the rosary,” Valentyna says. “It is so absolutely magnificent. I would strongly invite people to pray the rosary and not give up. Every single Hail Mary that we say is a drop of oil that goes inside of our lamp; we need to be like the wise virgins who had extra oil brought with them, we must be like a lamp that is standing on the table that can give warmth to others. We are guided perfectly by Our Lady.”

From the start, Chalice of Mercy has been supported by the Diocese of La Crosse, and Valentyna has met with Bishop Callahan regularly to share about the missionary work she and her team carry out.

“When the full invasion began last February, I went to see Bishop Callahan, and I was very touched that he spent so much time with me and showed from his heart such strong support,” she says. “We were able to reach out to all the parishes for help. I am so grateful. To feel his support at that moment was incredible.”

For Chalice of Mercy, monetary support is most helpful, as the supplies sent to Ukraine are donated, but shipping them is where costs are incurred. “We have shipped more than 200 tons of surgical supplies, food, clothing and baby items worth $30 million. We do air shipments,” says Valentyna. “Everything moves from New Jersey to Zaporizhya, Ukraine, in eight days. Every single dollar donated helps us a lot.”

Supporting Ukraine as it defends itself against Russia is vital, Valentyna believes. “Ukraine right now is like a ‘bulletproof jacket’ protecting Europe, and even the rest of the world, from Russian aggression,” she says. “We are willing to preserve our homeland. But we need help of all kinds from the rest of the world.”

Some of that help is needed for the wounded and broken bodies of the victims of the war. Chalice of Mercy is collaborating with Protez Foundation, a Minneapolis non-profit that provides prostheses to Ukrainian soldiers, children and civilians who have lost limbs due to the war.

True service is a gift from God, and so it must be carried out with a loving heart. “If we serve in just a humanistic way, there’s a tiresome element. We really need to see through the eyes of Jesus—He served because He loved and was loved by the Father,” Valentyna explains. “It’s not that I loved my people and my country first. In my conversion, I experienced how much God loved me and then I can share this love with others.”

Valentyna is very thankful for all that the people of the Diocese of La Crosse have done to help Chalice of Mercy make a difference in the lives of the Ukrainian people.

FOR MORE INFORMATION on Chalice of Mercy or to make a donation, visit chaliceofmercy.org.
To help with prosthetics for Ukrainian soldiers through the Protez Foundation, visit protezfoundation.com

After coming into the Church, Valentyna worked with a friend from Chippewa Falls to start Chalice of Mercy, a 501(c)(3) nonprofit organization in 2007. Soon after receiv-ing nonprofit status on Sept. 14 of the same year, Valentyna returned to Ukraine and discovered a Roman Catholic Church built right in the middle of the city of Zaporizhya. It was dedicated to “God the Merciful Father.” In 2011, this church became one of the shrines and co-cathedral of the Kharkivska-Zaporozhskaya Diocese. Valentyna works close-ly with the diocese in Ukraine developing the mission.

The mission of Chalice of Mercy, right now, focuses on shipping and providing hospitals in Ukraine with medical/surgical supplies, equipment and medicine. Another goal, when it becomes possible, is to bring medical personnel to help with reconstructive surgeries for those injured in the war—both civilians and the soldiers who have sacrificed so much. Chalice of Mercy also cares for refu-gee families, especially those with young children, by providing food, clothing, medicine and toys.

Finally, Valentyna hopes, as soon as possible, to restart the pilgrimages to Medjugorje for Ukrainian OB-GYNs and soldiers, and to continue the beautiful mission of St. Maria Goretti daycare, established near Zaporizhya in 2017. It is the first and the only Catholic child care facility in the region, and in forming children sweetly and beautifully in the Faith, it touches the lives of their parents and families as well.