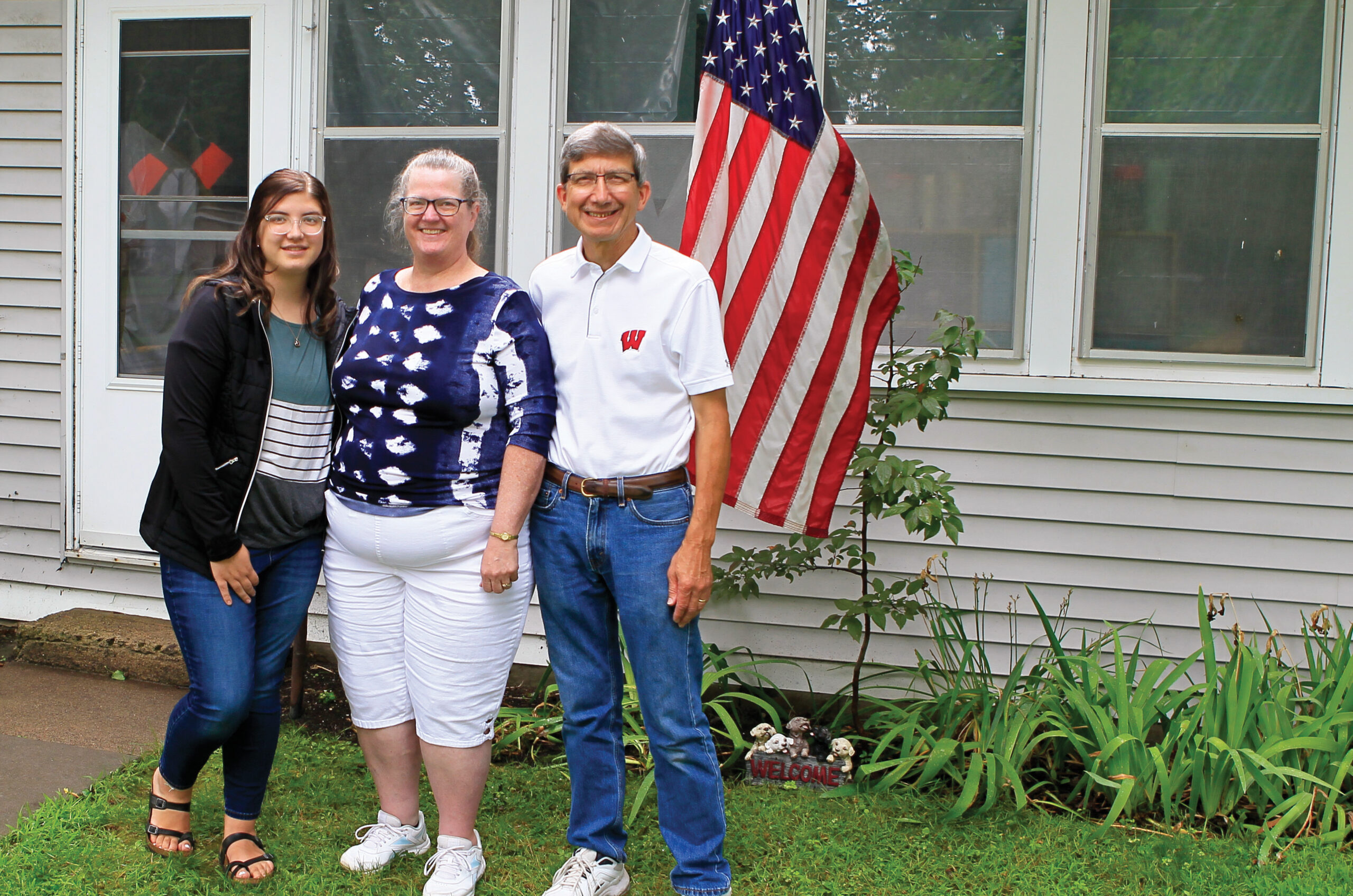 When God asks people to step out in Faith, as He first did with Abraham—our father in Faith—He grants the necessary grace to accomplish their mission and thus witness their Faith. Nestled within St. Joseph Parish in Menomonie, among upwards of 900 families, are Richard (Rick) and Linda Kostuch and their daughter, Stella, who share their Faith with their parish and the community.

Linda and Rick agree that their family’s Faith comes from their Catholic upbringing, volunteering at church and community involvement. Two of the strongest Catholics Linda has ever known, her father and Rick’s mother, converted to the Faith.

“My father was one of the best Catholics I ever knew,” said Linda. “We were always in church. He was the first one to step up and volunteer.” Rick lauds his mother for being there for the family, providing care and teaching her children their Catholic Faith. His father’s Faith influence was seen through his loving care for God’s creation and guiding his children toward a strong work ethic.

“Things can go wrong every day; you just gotta keep the Faith!”  –Rick

Nearing high school graduation, knowing he didn’t want to stay home because he feared he would become a burden on his family, Rick joined the Navy. He was unprepared for the methods the Navy uses in basic training to build the stamina of the recruit. It was almost more than he could bear. Receiving personal mail from family and friends brought some relief, but it wasn’t enough. Nearing his breaking point, he realized, “I needed to get away … to quit worrying about what’s going on! It was pretty tough! I started reading the New Testament and attending church on Sundays, realizing somebody was there supporting me and helping me align. That’s when I received the Holy Spirit; a real light came on—and it was constant! Classroom exams were easier, and everything—just everything—went forward so fast. I couldn’t believe it!”

Linda’s touch of the Holy Spirit

During a confirmation retreat in her senior year of high school, Linda, a non-committed Catholic, recognized the Holy Spirit touching her heart. “All of a sudden, I said, ‘I’m doing the right thing!’ I can’t even put my finger on what triggered it during that retreat, but there was something that just came down and said, ‘You are in the right place. You are doing the right thing.’” Linda credits this spiritual encounter as the reason she remains Catholic.

Seven years later, only three months after his cancer diagnosis, Linda’s father died on a night she chose not to visit him. “I went through a ‘Why me?’ thing.” Guilt and remorse swept in, along with the pain of loss and sense of abandonment. The funeral visitation was bittersweet because it was there she learned third-hand how much her dad had loved her and how proud he had been of her accomplishments. “It made me feel good, but it also made me ask, ‘Why couldn’t you tell me this?’” Distraught, she turned to her priest, who recommended she write a letter to her father expressing her feelings. “It’s probably one of the best things I ever did because it really made me think about what had happened.” Twelve years later, Linda relived the feeling of abandonment and loss of parental support following her mother’s death, only six months before she was to walk Linda down the aisle. Sadness fades while hope remains; “Later, I found I could do it on my own! Even though their physical presence was not there, I know they’re always there. They’re always talking to me.” Standing in front of a stained-glass window on their wedding day, Linda recounts how, while remembering her parents, the sun suddenly filled the window and washed over the couple, “I could feel their spirit with me, especially on that day.” Two years later, their daughter, Stella, was born.

“Remember the priorities in your life. … Faith and family come first.”  –Linda

“Stella’s Faith in God—and her very life—were in jeopardy after Stella’s cousin died by suicide,” said Linda. “They had been close, and his wife was pregnant with twins.” Stella, after much hesitation, continues, “He was the person who taught me a lot about life.” Later that year, a childhood friend went missing. She was found after taking her own life. Months later, another student died by suicide. Stella laments, “It was hard on everybody. The whole school was just different. It was like everything was just black! It literally took a month before people could start seeing light again.” This cycle of tragic events caused Stella to quickly spiral downward, even considering taking her own life to end her anguish. “I got very depressed, like super anxious about everything!”

Stella shares how she overcame depression and suicidal thoughts: “I really practiced my Faith in church, trying to distract myself anyway I could—with art and working with kids—doing the things I like to do.” Finding a new perspective on why God allowed such events to occur, she said, “It’s like, I’m supposed to be here. Yes, he’s gone, but he’s not suffering anymore. I really saw the light of praying! I saw what I wanted—what I am good at. I wanted to help children and help people like my best friend, who experienced a similar tragedy. I told her, ‘I know what that feels like. There’s nothing to be ashamed of.’ I was there to help her any way I could.” Crediting friends who reinforce her in her Faith, Stella says, “I have very supportive friends. My best friend actually understands what I do and how I do it.”

Supporting their parish through lay ministry is a family affair for the Kostuchs. Rick is valued as a long-time usher and active member of the Knights of Columbus. He serves in the Pope John XXIII Assembly #1203 in Durand. He also serves in the Monsignor Blecha Council #2055 in Menomonie. Having held the title of Grand Knight and being a member of the Honor Guard, few have a record of such dedicated service. Often the go-to guy for questions, Rick admits to stepping in with advice when he feels it is necessary to move things forward. With conflicting family work schedules—often rushing to and from work to the church, coupled with multiple volunteer activities—Rick laments that the family seldom gets to sit together during Mass but is quick to add that they are happy to step up without prior notice to fill any vacant position.

Relating to her favorite saint, Mother St. Teresa, Linda says, “She always said, ‘I’m here God, to do your bidding’—never expecting anything for what she did. That’s how I see myself with the Church.” Serving as a lector since high school and being extremely comfortable in this role, many see her as a “dynamite” reader. As an extraordinary minister of holy Communion, her reward is the ability to step in at any time, so the pastor has only to focus on the Mass. She also enjoys teaching altar servers. Less comfortable is the occasional role as an elementary teacher for Faith formation, struggling with families who are weak in their Faith but feeling rewarded when she sees the Faith of students blossom or they remember her in some special way. As part of a “Living Rosary” group, she found creative ways to teach her students to make and pray a one-decade rosary made of pipe cleaners and pony beads. During the COVID-19 lockdown, she partnered with Stella as greeters for the 4 p.m. Mass. When the church began to re-open following the COVID-19 lockdown, new volunteer positions opened when projection screens were installed in the church, ending the need for any liturgical books and materials. Linda and Stella, again, joined forces, becoming the first trained to run the program and train others.

Stella is known in the church for her compassion for others, especially the children and the elderly. She is dedicated to Mass participation as a cantor, a COVID-19 greeter and, most recently, for her technical knowledge as she learns and trains others to run the projection screen program. She says, “I just put it all in God’s hands, and hopefully, it’ll go well.” Stella often “adopts” grandparents, as she sits with elderly couples during Mass, sharing the love of one another’s company. As a teacher’s assistant during Faith formation, she loves to work with the children. For three years, Stella has helped one “sweet” student with disabilities to participate more fully in class. As a former altar server, she now helps her mother with that training and is involved with the Knights of Columbus family events scheduled from Lent through Easter. She says, “I feel like I’m being needed by the little kids I love.”

Father Mano, the pastor of St. Joseph Parish, points out how they show their Faith is alive by their works. He says, “They don’t ask, ‘Should I?’ They just do! This whole family is so committed.” “They are always willing to help people feel welcome at Mass,” said Carol Stratton, the parish and school receptionist, “and when there are activities, they like to interact. They’re just a real light—being God’s hands here.”The Kostuchs were recipients of the 2015-2016 Knights of Columbus Family of the Year Award for Monsignor Blecha Council #2055, followed by a similarly titled award from the Knights of Columbus Wisconsin State Council for the Diocese of La Crosse. Rick proudly claims, “To get it for the diocese—is just over the top!” Since 1995, Rick has been an active member of the local Lions Club and was presented with the Lions Club International Foundation’s Melvin Jones Fellow Award for dedicated humanitarian services. Like the Lions Club motto, Rick says, “We serve.”

Story and photography by Collene A. Spaeth
Published in the December 2022 issue of Catholic Life Magazine