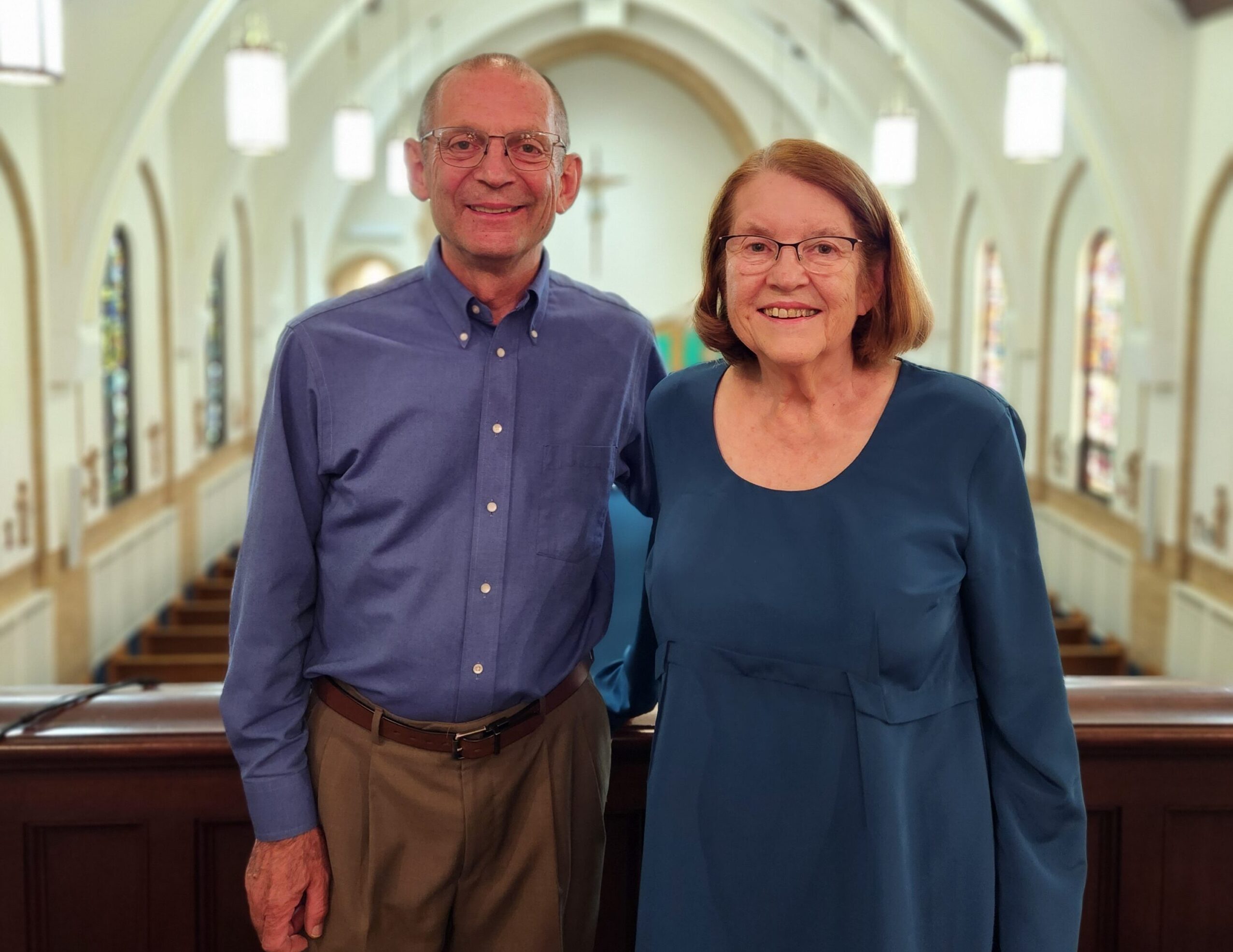 Carol and Jerry share their gift of music with others

“Mom was just determined that we’d all take piano,” Carol recalls. “And our dad supported it.”

While their childhoods were full of music and traditional Polish dancing, Carol or Jerry couldn’t have predicted just how much a part of their lives music would become in the years and decades that followed.

Growing up, the Osowskis lived only three blocks away from the Polish-founded St. Lawrence Parish. The eight siblings all attended the parish school, and by the time Jerry was in sixth grade and Carol in the seventh, the pair took on great responsibility in their parish’s music ministry. They played for both the 6:45 a.m. and 8 a.m. daily Masses,
quickly eating breakfast between and then rushing to school afterwards. They would often play for weddings and even get out of school to play for funerals. As they got a little older, Carol and Jerry accompanied the men’s choir and also their Assumption High School choir, something Jerry occasionally does even now, almost 50 years later.

The siblings each went off to college and in time both returned to Wisconsin Rapids and resumed their music ministry at their beloved home parish. Carol directed the choir, while Jerry accompanied musicians, sang and played guitar.

The two started families and careers in the area as well. Carol taught at St. Lawrence School and was asked to be principal after many years in the classroom. She also took on the principalship of St. Philip School in Rudolph when they were in need. During these years, her schedule often included accompanying Christmas programs and school Masses, which were a great joy to her. In 2003, Carol became the president of Assumption Catholic Schools in Wisconsin Rapids until resigning in 2011. Her career in education spanned some 30 years, impacting the lives of so many children and encouraging a love for music whenever she could. She shares that “students that don’t always do well in school can excel in music. It’s really good for them.”

Jerry, or “Mr. O” as the students called him, spent his career in the classroom as well, teaching middle school choir in Nekoosa for nearly 30 years. “Exploring music with children is always so much fun, just trying to pique their interest,” he says. “Middle school choir is such a good place to be because a student can be failing at everything else and still do well there. It’s just singing. And there they don’t have to be a star. They’re just one of 50 other kids singing. So, one can enjoy it, and be part of that, just the excitement of music and the beauty of music and how music moves you.”

Both Jerry and Carol are now in their retirement years. Jerry is the adult choir director and accompanist for cantors. And up until February of this year, Carol continued to accompany musicians as well. But she made the difficult decision that she could no longer accompany the choir or cantors at St. Lawrence Parish. “My macular degeneration reached a point where even playing from enlarged music was difficult for my eyes to continue focusing on the individual notes and details of the music.” Now she can enjoy the music of the Mass from the congregation, still playing in her head the chords she hears.

Other life tasks for Carol have had to be reimagined as well. When she could no longer even read her large print “Liturgy of the Hours,” she contacted Father Todd Mlsna, a legally blind priest serving in our diocese, and asked what she could do to continue her prayer routine. He recommended Divine Word online, which offers the audio version with hymns. Now Carol is able to continue her daily liturgy prayers and to be connected in a special way to her son, Father Derek Sakowski, pastor of St. Mary Parish in Altoona and St. Raymond of Peñafort Parish in Fall Creek.

Through their years of ministry, Carol and Jerry agree that some of their favorite memories come from playing for generations of family weddings and funerals. They have also loved playing for Holy Week and Christmas. “Christmas is fun because it has the best music,” Jerry shares. “There is so much beautiful music written for Christmas.” Growing up in the local Polish-heritage parish, the siblings even remember singing Christmas carols in Polish at school and during Mass.

Another joy for Carol and Jerry has been the involvement of their children in parish ministry, especially alongside them in music ministry. Carol’s daughter Sarah sings in the adult choir. And when Jerry’s daughters were in high school, he sometimes had all three of them singing while he accompanied them. Even today, his oldest daughter lives in town and cantors for Mass with Jerry accompanying. He gets such a sense of joy, knowing he trained her in this task and has gotten to hear her voice mature as she continues to use the talent they share.

Though most of his “spare time” is taken up with preparations and rehearsals for parish music ministry, Jerry finds some time to enjoy his hobbies with his wife, Elizabeth. They golf, walk, bike and garden together.

Carol really enjoys playing cards, especially bridge, with several local groups. The siblings enjoy traveling and were even able to take a trip to Poland together with a tour group about four years ago. They were immersed in the history and culture of their ancestry and by the end were better able to understand both the beauty and tragedy the country and its people have endured.

With their music having grown out of their early family life and training, Carol and Jerry have truly come full circle in giving it all back to their home parish. They see their years of music ministry as a source of joy. “It is such a part of our lives. We simply can’t imagine not doing it.”