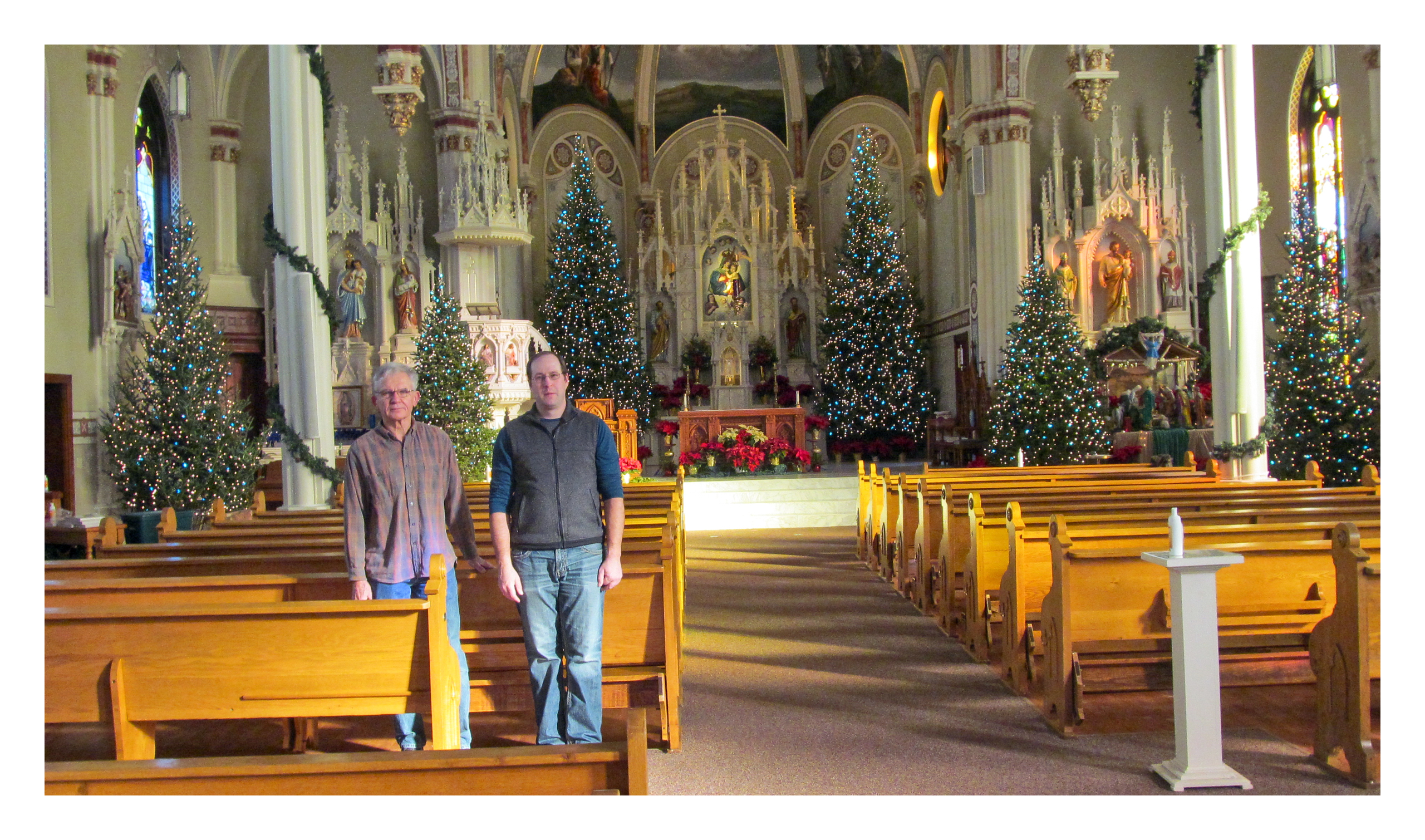 For the past 20 years, 160,000 lights have been arranged on 92 Christmas trees by La Verne Michalak and his crew in decorating Ss. Peter and Paul Church in Independence for the Christmas season. Decorating the trees with lights is not a haphazard, spur of the moment activity for them. Rather, La Verne developed a decorating plan, which is highly organized and meticulously executed months before Dec. 24.

La Verne says he is on the lookout for trees in July, but the hunt really gets serious in October. Over the years, he has gotten trees from about eight different locations. Lately, a parishioner has donated trees from his plantation not too far from the church.

In the early years, four trees were used. Now La Verne usually searches for six as time allows: two large and four smaller. La Verne said,” I go out to the plantation, walk around and try and eyeball what looks to be a good tree. It is challenging because some of these trees are 40 feet tall. I am looking at the tops and trying to judge which ones are going to look good and trying to get two of them that more or less look alike. You don’t want a huge tree paired with a small one. You are looking for balance. When I find the right ones, I tag them so I can find them when snow is on them in December. I also use aerial photos to help locate trees.

“I come back after deer hunting season, the first week in December, and cut them down. Then I load them onto a trailer and bring them to the yard at my house where I cover them with tarps to protect them from snow and freezing rain. Near the end of Advent, I bring the two tall trees, about 20 feet, into my garage and prop the tops up on a sawhorse to get them off the ground far enough so I can decorate the tops with lights while they are laying on their sides. To be perfect they need to match each other in height. I run a tape measure up the center of the trunk and get it precisely so that they’re within an inch of each other. Lights are put on the top of the tree now because once they are standing in church, it is a challenge to safely put lights on the top unless you use scaffolding or other special equipment.”

The partially decorated trees are brought into the church after the last Sunday in Advent to complete by adding the rest of the lights. By the time La Verne and his crew of seven or eight helpers are finished putting lights on the trees, they will have used 70 to 75 strings of clear lights each containing 100 bulbs per string, plus additional strings of blue lights. In total, they use about 8,000 lights. La Verne says the entire project takes about 80 man-hours.

Over the years, La Verne has fine-tuned his decorating skills. “I have a stick that’s marked in different increments so I can measure how far out from the trunk I’m putting the lights. Starting near the top and working my way to the bottom, I use the stick as I place the lights. For example, at three feet from the top, I make sure the lights are out 18 inches in every direction so the taper is the same. I do this for both trees; measuring as I am putting the lights on.”

La Verne even adopted a tip he got from watching a TV program where Martha Stewart was talking about decorating Christmas trees. “She said to put some of the lights deeper into the tree so that when the congregation looks at the trees from the back of the church, the lights almost appear to be moving because some of them get hidden behind branches, but a slight movement of the head reveals them again. So, there is just a little twinkle and sparkle to them that just livens them up.”

La Verne grew up on a farm in the Stanley area and his family attended Holy Family Church, now part of All Saints Parish. He moved to Independence 49 years ago and began a career as a small-town attorney. Prior to decorating Christmas trees at Ss Peter and Paul Parish, he was part of a crew that did the decorations at the Independence Opera House. Admiring the beauty of the decorations, Father Douglas Robertson, then pastor of Ss Peter and Paul Parish, asked La Verne, “Do you suppose you could do a couple of trees for us next year?” La Verne said, “Yes,” and that was how it all started.

Last Christmas was La Verne’s 20th and last year of being in charge of the tree decorating. He is retiring, but his legacy will live on. Ss Peter and Paul Church will still have Christmas trees decorating the sanctuary in the future. La Verne is handing the reins over to Daniel Filla, who has been helping La Verne for several years. La Verne said, “He’s meticulous, he’s great on detail, a good organizer and he will do as good or better of a job.” La Verne expects to help Dan with the job during the next couple years to aid in the transition.

As a final note, La Verne said, “In the first two of the 20 years, there was a total of a couple hundred dollars of expenses, which were paid by the parish. All costs since then have been covered by individual donations.

“I have enjoyed every minute.”