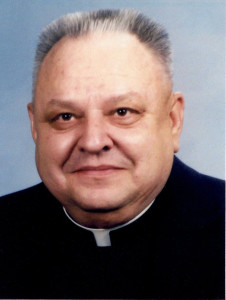 He was preceded in death by his parents, Lewis and Caroline Mish; brother, Martin Mish and a nephew, David Mish.

The Mass of Christian Burial will be celebrated at 10:00 a.m. on Wednesday, November 25 at SS. Peter and Paul Parish in Independence.  The Most Reverend William Patrick Callahan, Bishop of La Crosse, will be the principal celebrant and Reverend Charles J. Riebl will be the homilist.

The Diocese of La Crosse and the family are being assisted by the Edison Funeral Home in Independence.

Members of the Purgatorial Society are reminded to offer three Masses for the repose of the soul of Father Mish.  Requiescat in pace.