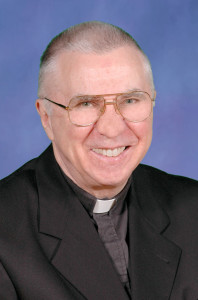 Father Leon Powell, at the age of 81 and a priest for 44 years, died on Monday, December 7, 2015 at Mayo Clinic Health System – Franciscan Healthcare in La Crosse.

Leon Anthony Puwalowski was born on July 26, 1934 in Stevens Point, Wisconsin, the only child of Leo S. Puwalowski and Bernice T. (née Glowienka) Puwalowski.  As an adult, he decided to simplify his last name by formally changing it to “Powell.”  His elementary education was at Saint Peter Elementary School in Stevens Point and he attended high school at West De Pere Catholic High School in De Pere, WI.  In 1956 he received a Bachelor of Science degree (History), with a minor in Biology from Saint Norbert College in West De Pere.  Beginning in February 1957, he served for two years in active duty with the Army Artillery and was discharged as a Specialist 5.  For the next several years, he was employed in Sawyer County social services in Hayward, Wisconsin and also a caseworker in Portage County.  During this time, he was called back to active duty at Fort Lewis, Washington, during the Berlin Crisis, and was finally discharged in August of 1962.  After he returned to social work he began discerning a call to the priesthood.  He contacted Bishop Frederick Freking, who interviewed and accepted him as a seminarian.  He was sent to Mount Saint Paul in Oshkosh for courses in philosophy and Latin.  He went on to study theology at Saint Francis Seminary in Milwaukee from 1967-1971.  Father Powell was ordained on May 29, 1971 at Saint Peter Church in Stevens Point by Bishop Frederick W. Freking.

Father Powell’s first assignment was as Associate Pastor at Saint Anne Parish in Wausau on June 18, 1971.  On June 6, 1973, he was appointed Associate Pastor at Saints Peter and Paul Parish in Wisconsin Rapids.  On September 7, 1976, he was appointed Associate Pastor of Saint Joseph Parish Stevens Point.  In August 1978 until May 1980, Father Powell served Chaplain at Saint Joseph’s Home, Bethany-Saint Joseph Home and Bethany Lutheran Home in La Crosse.  He was then assigned Pastor at Saint Philip Parish in Rolling Ground until September 9, 1985, until being appointed Pastor of Holy Guardian Angels Parish in Almond and Saint John Parish in Heffron.   In October 1994, Father Powell became the Pastor of Nativity of the Blessed Virgin Mary Parish in Keyesville, Saint Anthony de Padua Parish in Cazenovia, Saint Killian Parish in Bear Valley, and Sacred Heart Parish in Lone Rock.  In 1996, he became the Vice Chancellor for the Diocese of La Crosse.  On July 1, 2012, Father Powell was granted status of senior priest, while continuing to serve as Vice Chancellor until May 1, 2015.

Father Powell was preceded in death by his parents.

The Mass of Christian Burial will be celebrated at 10:30 a.m. on Monday, December 14, 2015 at Christ the King Chapel, Holy Cross Diocesan Center in La Crosse.  The Most Reverend William Patrick Callahan, Bishop of La Crosse, will be the main celebrant and Reverend Monsignor Robert P. Hundt will be the homilist. Burial will be in Guardian Angel Cemetery in Stevens Point on Wednesday, December 16, at 10:30 am.

On the day of the funeral, the Rosary will begin at 9:15 a.m. with visitation following until the time of the Funeral Mass.

The Diocese of La Crosse and the family are being assisted by Blaschke-Schneider Funeral Home in La Crosse.

Members of the Purgatorial Society are reminded to offer three Masses for the repose of the soul of Father Leon Powell.  Requiescat in pace.