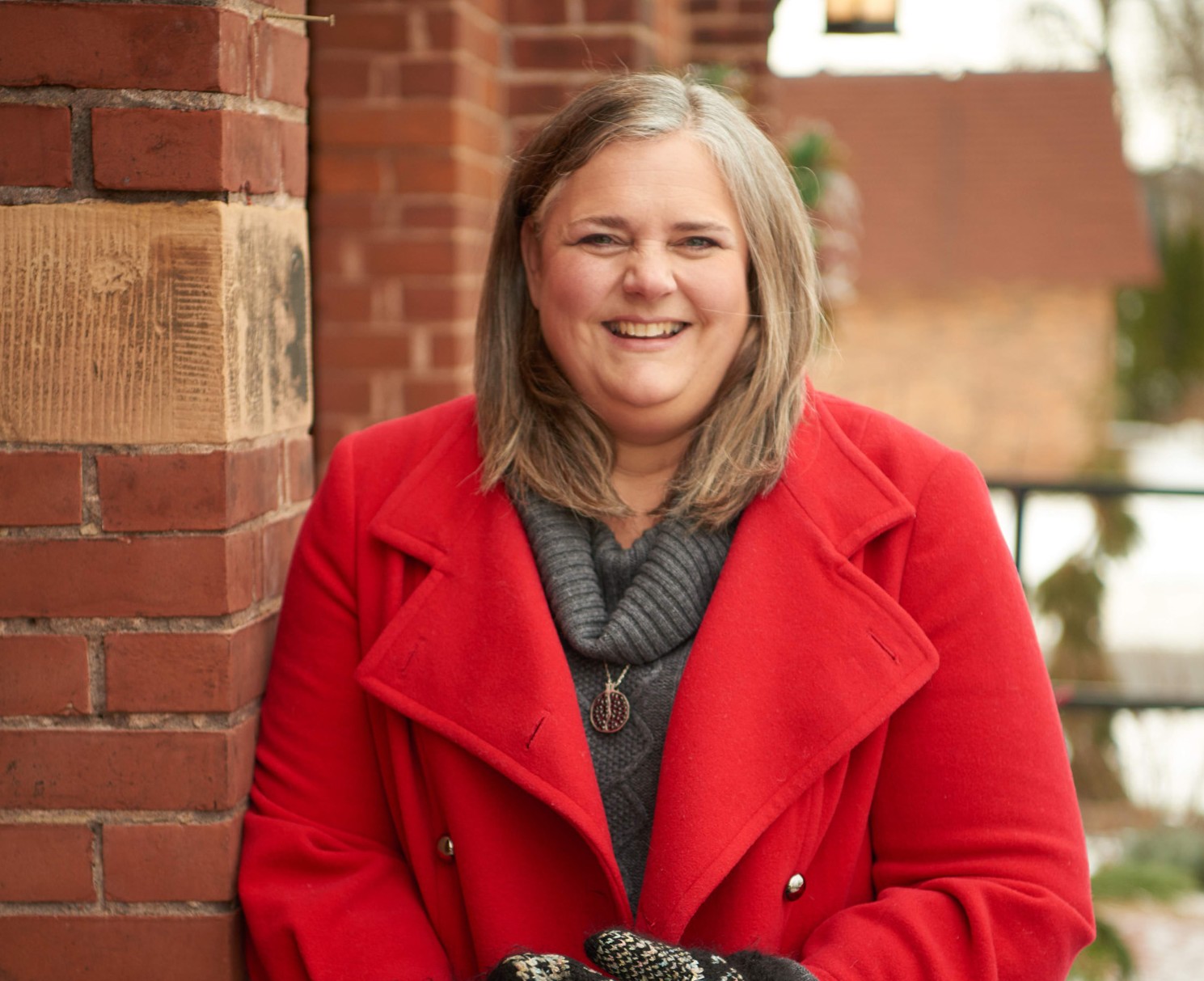 It is said that sometimes God doesn’t change your situation because he is trying to change your heart. On May 14, 2014, Sharon Scheel of Sacred Heart/ St. Patrick Parish in Eau Claire found herself in one of those situations. That afternoon, she received a call from her father, Albert Woody Jr., who lived eight houses away. He had a bad fall and was waiting for an ambulance. Sharon and her husband rushed over. The fall had caused her father’s leg bone to separate from his leg, making for a very traumatic scene — one Sharon says she’ll never forget. 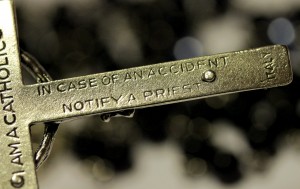 Hopeful that the situation wasn’t as bad as it looked, and that his leg could be rehabilitated, Sharon and her five siblings gathered at Luther Hospital to be with him. At some point that evening, a nurse alerted them to the fact that their father had also suffered a heart attack, and would likely not survive the night. Blindsided by the news, Sharon was devastated.

The pastor of the hospital came to speak with Sharon after hearing her father’s prognosis, asking her what she wanted to do. “The only thought, really, in my head was that I had to call a priest,” Sharon admitted. Thinking over her life experience and her limited exposure to the Catholic Church or any other faith, she was quite surprised at her own thought, saying, “There was a holy man, a pastor, right in front of me and I could have said, ‘Let’s pray for him’… but I didn’t. I had that thought … call a priest.”

The pastor told her he knew someone to call. At 2:30 a.m., Father Konopa came through the door to anoint Sharon’s father. Albert Woody had grown up Catholic, married in the Church and had his first child, Sharon, baptized there. Shortly thereafter, though, he had a falling out with a priest and left, taking his family with him. This short bedside meeting with Father Konopa was the first step in erasing a very painful history.

“Father had gotten out of bed at 2:30, sick himself, to come for my dad, who had been away [from the Church] for so long,” she explained. All the while, Sharon said she watched and cried, later realizing just how profoundly these 10 minutes or so would change her life.
Sharon’s father died later that day. But the story is far from over. 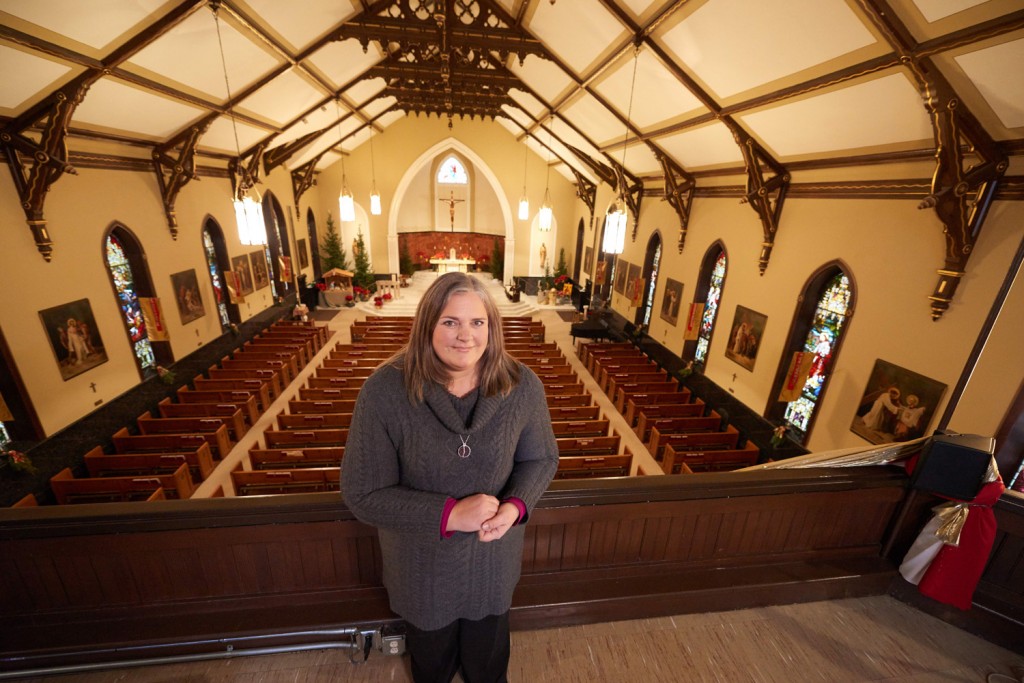 Sharon stands in St. Patrick Church in Eau Claire, a church she newly calls her own after joining the Catholic Church through the RCIA program at Easter in 2015.

“I think I always had some belief in a God that was far away from me and that didn’t really pay a whole lot of attention to me, but when I asked for help, I got it. I got that prayer answered. Right there.”

After her father’s death, Sharon made some major life changes. “People talk about doing a 360°,” she said, “but a 360° is a circle where you end up going the same way. So I think I did a 180°… I just turned.” It was in admitting her pride and seeing that she was going the wrong way that she knew it was time to get her life back on track. So at nearly 50 and after having raised three children to adulthood, Sharon laughed as she said, “When people tell you, ‘You’re not too old to change,’ you really never are!”

Examples of faith
Lucky for Sharon, she had some great examples of faith early in her life. “I was really graced with two strong, Catholic grandmothers,” she said. Sharon fondly remembers visiting her paternal grandmother, who taught her bedtime and mealtime prayers, and watched how good she was to people.

During those visits, her grandmother would also take Sharon to Mass at Sacred Heart of Jesus Parish in Eau Claire. “I got to watch her,” Sharon remembered, “I would study her … when we got in the church, she was very quiet, and very reverent, and very focused … I can remember thinking, probably at 8 or 9, ‘What is this that makes [her] act this way? What is this thing?'”

Being the example
Sharon still felt a desire to find out about this “thing” some 40 years later. So she, along with her husband Dan, signed up for RCIA promptly after her father’s passing. But the journey wasn’t always easy. Chuckling, Sharon likened herself to this quote by C.S. Lewis about his journey back to God, calling himself “the most dejected and reluctant convert … kicking, struggling, resentful and darting his eyes in every direction for a chance to escape.”

“Nobody wants to be tested. No one wants to be challenged by God,” she explained. That is what the process felt like at times to her. There were many moments that she and her husband had to lean on one another to stick with the journey they had begun.

At the Easter Vigil in 2015, Sharon and her husband came into full communion with the Church. They brought with them their now 9-year-old adopted son. “I really love being back!” Sharon shared. “There are times during Mass, especially when we sing ‘Hosanna in the Highest,’ that I get teary-eyed. Every. Single. Time.” She also explained her biggest struggle in the homecoming: “I grew up afraid of the Church. I grew up afraid of priests. I grew up with an unfounded fear that I sort of inherited … And I work every day to try to overcome that.”

Full circle
The journey home led Sharon and her family to Sacred Heart/ St. Patrick’s Parish, the very same church where she sat with her grandmother all those years ago. “If I was going to come back to God and to the Church, this had to be it,” Sharon shared. “This was the parish. I was almost driven to be here. I don’t know if I had to be here because my family was here, but I suspect that was it … [otherwise] there was no way to sort of bring everything full circle unless I go back to where it started.”

Revisiting her roots, Sharon explained, “I’ve always felt like and identified as being ‘Catholic’ because I knew that I was baptized here and my family and my grandmothers were [Catholic]. But I also was, on some level, on the outside looking in, and that really gave me something like a 40-year spiritual wound.

“Then, when Father Konopa walked through that door for my dad, and really for me, he was like a surgeon who closed that wound. There was a lot of healing to be done, but at that point that wound closed for me. I started to get better. I started to feel like less of an outsider and more like ‘this is where I have to go.’

“I realized the power of mercy and the peace of reconciliation.”