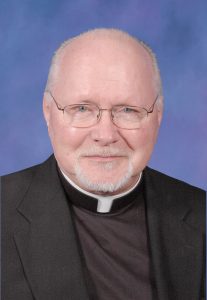 Robert Wagner was born on June 18, 1931 in La Crosse, Wisconsin, and was adopted by Leo and Barbara (Eberhardy) Wagner.  He attended St. Matthias Elementary School and St. Francis Minor Seminary, both in Milwaukee and St. Paul Seminary in St. Paul, Minnesota.  Father Wagner was ordained on May 18, 1957 at Christ the King Chapel at Holy Cross Seminary in La Crosse by Bishop John P. Treacy.

He was preceded in death by his parents Leo and Barbara, two brothers Richard and Philip, and one sister Ruth.

The Mass of Christian Burial will be celebrated at Christ the King Chapel in Holy Cross Diocesan Center on Monday, October 23, 2017 at 11:00 a.m.  Bishop William Patrick Callahan will be the main celebrant.  Burial will be in the Catholic Cemetery in La Crosse.

Visitation will be held at Christ the King Chapel on Monday, October 23 beginning at 9:00 a.m. until the time of the Mass.

The Diocese of La Crosse and the family are being assisted by Blaschke Schneider Funeral Home in La Crosse.

Members of the Purgatorial Society are reminded to offer three Masses for the repose of the soul of Father Wagner.  Requiescat in pace.