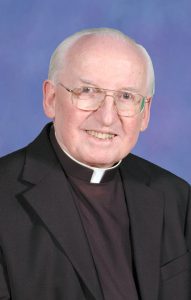 Joseph Alfred Grassl was born on March 16, 1922 in Milladore, Wisconsin to Ignatius and Theresa (nee Hoffman) Grassl. He attended high school at Salvatorian Seminary in Saint Nazianz, Wisconsin. He was sent to study philosophy at St. Louis Preparatory Seminary in St. Louis, Missouri and he completed a S.T.B. in theology at Saint Mary’s Seminary in Baltimore, Maryland. Father Grassl was ordained a priest on April 16, 1950 at Saint Joseph Cathedral in La Crosse by Bishop John P. Treacy.

Father Grassl’s first assignment was as temporary administrator for about six weeks at Saint Joseph Parish in Menomonie. He was assigned to teaching at Holy Cross Seminary when it was the castle mansion at 1419 Cass Street in La Crosse. In August of 1950 he served for a short time at St. Anthony Parish in Cazenovia as a temporary assistant. He soon returned to the teaching staff of Holy Cross Seminary and moved to the new Holy Cross Seminary in La Crosse that was dedicated in 1951. There he served for years as an instructor of Latin, Greek, and German while being the librarian. During the summers of the 1950’s he was sent to Rosary College in River Forest, Illinois, Loras College in Dubuque and the University of Michigan to post graduate studies for Library Science and Latin. In June of 1963 Father Grassl became the Dean of Studies and a Spiritual Director of the seminary college. In 1966 and then again in 1985 he was appointed the Diocesan College of Consultors.

The Mass of Christian Burial will be celebrated at Christ the King Chapel in Holy Cross Diocesan Center in La Crosse on Wednesday, January 24, 2018 at 11 :00 a.m. Visitation will be held at Christ the King Chapel one hour prior to the Mass. Very Reverend William A. Dhein, VG will be the main celebrant. Monsignor Delbert J. Malin will be the homilist. A luncheon will follow at the refectory of Holy Cross Diocesan Center.

On Thursday, January 25, there will be a prayer service at 12:30 p.m. at St. Kilian Church in Blenker. Refreshments will be served following his burial at St. Kilian’s Cemetery.

The Diocese of La Crosse and the family are being assisted by Dickinson Funeral Home, 515 McHugh Road in Holmen.