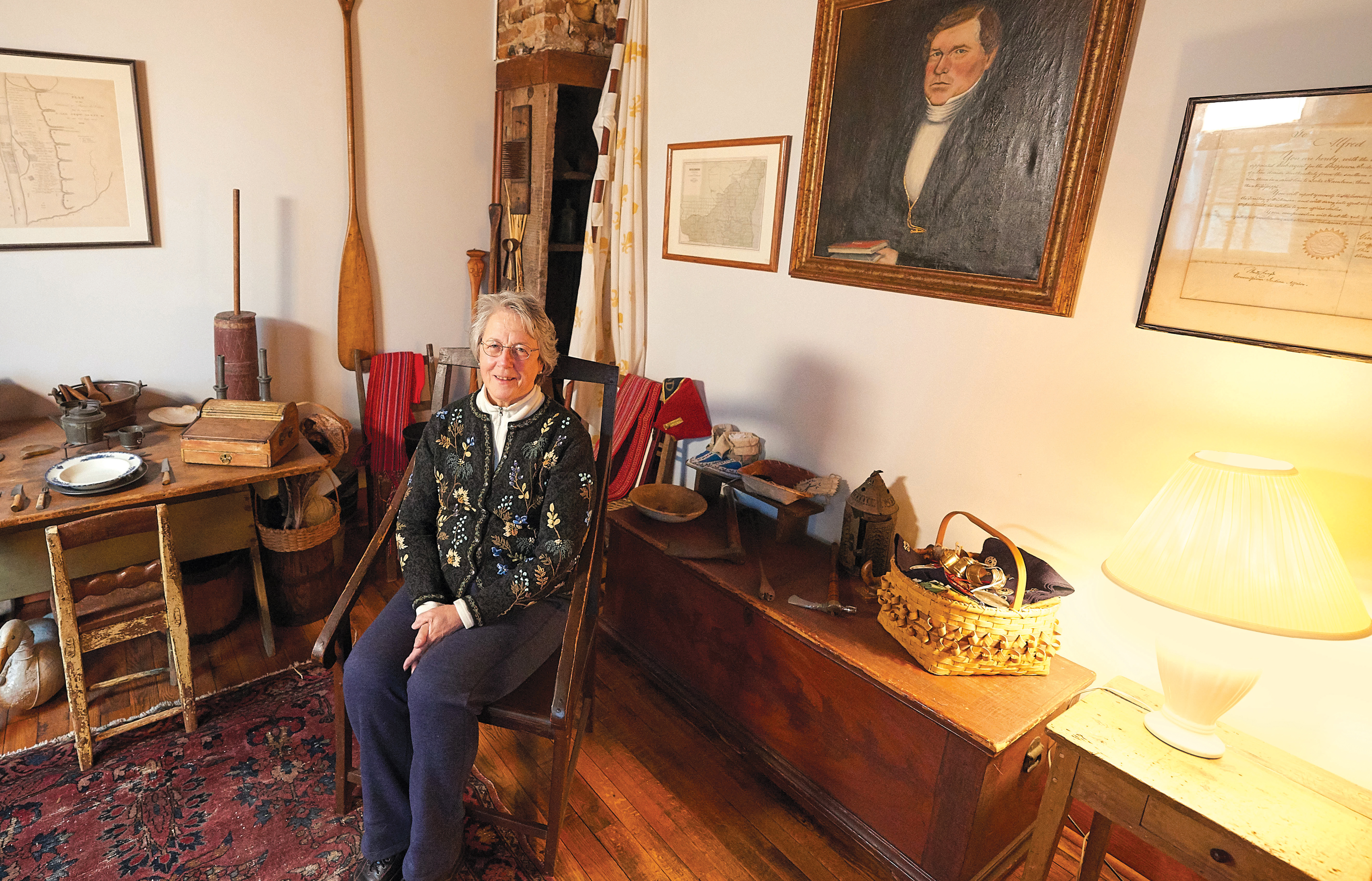 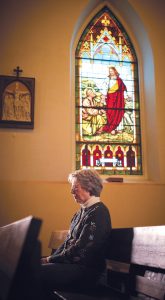 Mary sits in her family’s pew under the stained glass window her family purchased for St. Gabriel Church.

Mary sits in her family’s pew under the stained glass window her family purchased for St. Gabriel Church.

For Mary Elise Antoine of Prairie du Chien, her connection to St. Gabriel Church is for life, just like her commitment to her Catholic faith. Her family’s roots run deep at St. Gabriel Church, although nowhere close to its beginning in the early 1800s.

St. Gabriel Church, now part of Holy Family Parish, is part of the long history of Catholic life in the Diocese of La Crosse — even before the area was officially a diocese of the Catholic Church. Mary was born and raised in Prairie du Chien, and has been active at the parish and serves as the historian for St. Gabriel Church.

How are history and faith connected for you?

History, like my faith, is, was and will be a part of my life. I read the history found in books, but I search for the history behind the facts that one finds in books. I am fascinated with the history that has not been written by famous people. Often, their history is found in and can be told through the material culture they left behind.

Since the time of my great-great-grandmother, my family has been connected to St. Gabriel’s. When I was growing up, St. Gabriel Parish was a constant presence.

What was special about growing up in St. Gabriel Church?

Almost every month, there was a special celebration. Fall festival with a dinner prepared by the “old ladies,” who cooked for every dinner and funeral. The dining hall was filled with aromas of baked chicken and mashed potatoes as we ate elbow to elbow at the long tables covered with white crinkly paper. The windows sweated from the steam of food and warmth of so many people, as some ate and others waited in line until a table was cleared. After eating, the children ran across the street to the parish hall to play games – fishing pond, pop the balloons with darts, pitch pennies into glass dishes. The men who ran the games always made sure that we won something.

The Christmas program was the highlight of December — daily practices culminating in the evening program — driving with parents and siblings through a crisp dark night with the sky filled with stars. There was a program of songs, all the traditional favorites honoring the birth of Christ, ending with the portrayal of the Christmas story.

Several days later, we drove through the night, this time on the way to Midnight Mass and wondered if this was like it was when Christ was born. It was truly midnight and the church was filled with the smell of cedar trees, burning wax and incense. It was packed with families.

In February, it was the Swiss steak dinner. March had the St. Patrick’s Day dinner and then Holy Week. Again, going with family to Holy Thursday service, Good Friday and Holy Saturday. Each time, the church filled with the smell of incense and there was barely a place to sit.May was the Mothers’ Day breakfast, which the men cooked. Whatever the celebration, young, old, families and single people participated.

Your renovated home once sat on St. Gabriel Church property. What drew you to this building?

My wanting the house had to do with its history, the culture it represented and a feeling of a need to save it. I walked by this house four times a day when I was growing up — on the way to St. Gabriel’s School, home for lunch, back to school after lunch and home at the end of the school day. Gus and Margaret Nolan lived in the house, and I would wave to Margaret as I walked to school.

When we returned to Prairie du Chien, the house still stood, but looked worn. Returning to Prairie with the knowledge I had gained on historic structures, I realized the house was old, so I continued to watch it. It became worse; it was gutted; it stood empty. I could stand it no longer, so I contacted the owner. He did not know what to do with the house, so he sold it to me for what he had in it.

To me, the house was a connection to the past, to the rich history of Prairie du Chien; it had character, presence and importance. If I did not save it, it would be gone. I knew of its connection to the priests who had come to minister to the Catholics of Prairie du Chien, but to me its preservation came first. Once the house was saved, I then did more detailed research on Fathers Augustin Ravoux and Joseph Cretin. And as with the ordinary people I had researched before, I came to know them and appreciate the lives that they had led.

As parish historian, why is sharing the church’s past important?

I feel that someone has to be an advocate for the history of the parish and the church structure itself. To the men who were the pastors of St. Gabriel’s many years ago, the church structure was important. The structure is a very visible symbol of the Catholic faith.That advocacy on the part of the Catholic Church hierarchy has lessened greatly. I watched the red brick house Father Lucien Galtier built with money he received from family and friends so that St. Gabriel’s could have a school be demolished. I argued for the preservation and adaptation of the school from which my father, his siblings, my sisters and I graduated, but the decision had been made to demolish it.

The future of the parish house built in the 1870s stands in abeyance. So, someone has to keep on putting the history of St. Gabriel Church out there, so that it will continue to stand.

Sharing the history of St. Gabriel Church, as well as the history of Prairie du Chien, is a natural way for Mary to illustrate how faith can make a difference in the lives of people struggling to survive. The challenges today are different than those of the first Wisconsin settlers, but Mary believes Catholicism can bring joy and strength to those most in need in any age.

“The couples that have a really strong faith, I know they try very hard to pass it on to their children. Our society is so different from when I was growing up,” she says. “The Church is part of my life. I am not out there proselytizing. I practice my faith, and hope I can lead by example.”

Prairie du Chien began with a fort built in 1685, but a permanent settlement did not happen until 1775. The French-speaking settlers came to farm and were joined by fur traders and voyageurs, living in a small village surrounded by farmland with a cemetery close to the village. For many years, Catholics in Prairie du Chien had to travel to Fort Michilimackinac in what is now Michigan or St. Louis, Mo., to have sacraments like baptism or marriage celebrated by a priest.

In 1816, the U.S. military arrived in the village and commandeered land for its troops. They chose a site that included the cemetery, and residents of the village had to dig up their dead and move them to a new location farther from town.French missionaries traveled in the region to spread the Catholic faith to Native Americans, as well as provide ministry to the Catholics in the area. Most people who lived here spoke French, so the missionaries that were sent were French. Father Marie Joseph Dunand, a Trappist, was the first priest to come to Prairie du Chien. He arrived in 1817.

During his time in Prairie du Chien, Father Dunand kept busy with 135 baptisms, 14 marriages and one burial. It was 10 years before the next priest came … for two visits. Although Father Vincent Badin began the construction of a church he called St. John the Baptist, it was not until 1832, when Venerable Father Samuel Mazzuchelli,  arrived in the village, that work began on the St. Gabriel stone church. Italian native Father Mazzuchelli’s work was the building of churches in America, so he was not a permanent fixture in the parish. St. Gabriel Church was finished in 1849 on a piece of land donated by a man who wasn’t even Catholic.Although building the church took almost 20 years, the parish was active, with a permanent pastor assigned in 1840. The third pastor, Father Lucien Galtier, arrived in 1847 and oversaw the completion of the church, as well as the addition of the Stations of the Cross and a spire to the building. Father Galtier lived in a simple brick house across from the church until he died in 1866.

Like any parish, St. Gabriel Church went through times of growth and change over the years, but the tenacity of the early settlers and their commitment to their Catholic faith speaks deeply to Mary. The willingness of European missionaries to travel to the wilderness and serve the small, scattered enclaves of Catholics are an inspiration.