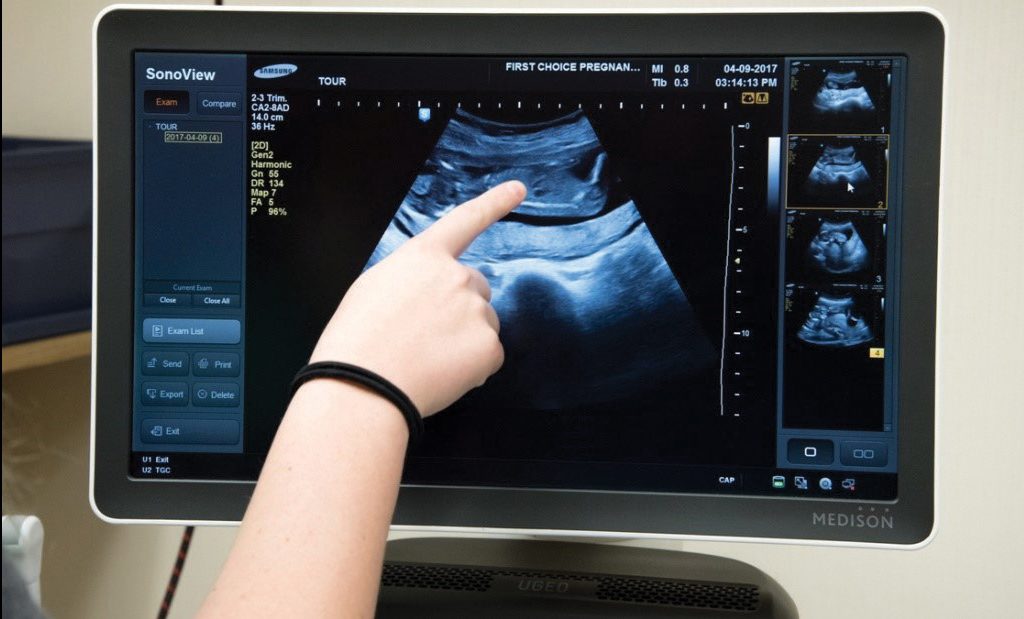 Stephanie LaRose, First Choice executive assistant, points out the baby’s heartbeat on the sonogram produced by the machine. The details these new machines provide give the pregnant mothers a clear look at their baby.

Tanya was divorced with four children and has a story that could shake a person to the core. She was faced with an unexpected pregnancy. The baby’s father lived in another state and there were no plans for a permanent relationship. An abortion was scheduled for a few days later. Tanya called the First Choice Pregnancy Resource Center (First Choice) in Stevens Point requesting an ultrasound to “see her baby” to be sure of her decision.

After seeing her wiggly, 8-week-old baby, fully equipped with heartbeat and arm and leg buds, Tanya chose life — regardless of the consequences. Three months later, at First Choice Pregnancy Resource Center’s 2015 Annual Banquet of Life in front of 200 attendees, she shared the impact that First Choice had on her and her family. Bravely, Tanya shared the pain of her past two abortions and her subsequent choice to heal and choose life for the baby girl she was carrying.

Tanya’s oldest child, a daughter who was, at that time, a senior in high school, was in the audience. Tanya had kept the history of her past abortions from her children. Tanya now knew that her daughter would have questions. She was prepared to be as transparent as possible, helping her children to understand what had led her to end the lives of her two unborn children.

Soon after the banquet, Tanya discovered that her daughter was pregnant and had been seriously considering an abortion. Tanya’s honesty caused her daughter to share the burden of the truth she was hiding. Due to Tanya’s encouragement, her daughter began to feel more optimistic and realize that there was hope for her and her unborn baby.

One year later, Tanya once again spoke at First Choice’s Banquet of Life. On one side of Tanya, proudly holding their 8-month-old daughter, stood her boyfriend. On the other side, lovingly embracing Tanya’s first grandson, stood her eldest daughter.

Tanya’s story could have been completely different if First Choice hadn’t been there for her and her growing family. First Choice has facilities in Wisconsin Rapids and Stevens Point that provide free counseling, testing and education for women and men facing an unexpected pregnancy. They are among 2,000 pregnancy help organizations nationwide that provide alternative options to abortions through education and counseling.

Through the support of organizations like the Knights of Columbus, who are very active in pro-life works, First Choice is able to help more families every year.

In February of 2015, Jim Havlovick, a member of St. Bronislava KC Council 13380, was elected to the board at First Choice. At that time, each center had an outdated ultrasound machine; however, the unit in Wisconsin Rapids was inoperable and was being cannibalized in an attempt to keep the machine in Stevens Point operational. Jim had just read an article in the KC magazine outlining their Ultrasound Initiative.

The Ultrasound Initiative by the National Supreme Council of the Knights of Columbus partners with state and local KC councils to provide matching funds towards the purchase of new ultrasound machines for pregnancy care centers such as First Choice. In fact, since 2009, this initiative has funded 752 ultrasound machines, costing more than $36 million. These units have been placed in pro-life pregnancy care centers in all 50 states, as well as in Canada, Guatemala, Jamaica and Peru.

Jim brought this need to replace the Wisconsin Rapids ultrasound to the St. Bronislava KC council in Plover. The council emphatically backed this undertaking and approved the effort so that fundraising could begin.

The response to the campaign was overwhelming. With the matching funds from the Knights of Columbus’ National Office, more than enough money was collected to fund the purchase of the ultrasound machine for Wisconsin Rapids. The excess funds were passed on to Stevens Point KC Council 1170. These were used as seed money to help them raise funds for a second machine that would replace the outdated, unreliable unit in Stevens Point. Again, the members of the Stevens Point area church communities responded very generously and the second machine became a reality.

In June of 2015, Leah Ann Trzinski, the then executive director of First Choice, requested bids from three different ultrasound vendors. Ultimately, Samsung was selected because it is recognized as a socially aware company that puts a great value on the Culture of Life. Samsung offered the units to First Choice at a fifty percent discount.  Samsung was great to work with and they even took on risk.  To save cost, they built and shipped two machines even though the second unit was still in the process of being funded and would need final approvals.

The first ultrasound machine became operational on Aug. 18, 2016, in Wisconsin Rapids. The second unit, in Stevens Point, came online on Feb. 13, 2017. With two “state-of-the-art” ultrasound machines, First Choice was now able to provide the true picture of life inside the womb.

First Choice Pregnancy Centers in Wisconsin Rapids and Stevens Point are open Monday-Thursday, 10 a.m. to 5 p.m. For a tour or information, call 715.345.0280 or visit firstchoiceprc.org. For other pregnancy resources, please visit diolc.org/pregnancy

First Choice, which just celebrated its tenth year in October 2017, is a Christian based ministry , privately funded, 501 (3) C non-profit organization that provides a variety of services. The great majority of clients are single with an unplanned pregnancy. They are generally between the ages of 18 and 24 years old. Ten percent of their clients are in high school. Other First Choice services include pregnancy tests, pregnancy education, referrals to other community resources, hands on parenting education (HOPE), referrals to adoption services, post- abortive recovery support, miscarriage recovery support and education on birth control and abstinence. They also have a baby boutique with baby clothes, diapers and all the other supplies (even furniture) that are needed to help new parent(s).

Cindy Brengosz, the current executive director of First Choice, says their greatest strength is the nurturing and compassionate atmosphere at their centers. Their facilities provide confidential advocacy and education giving clients the tools to make healthy decisions in a supportive environment. First Choice PRC gives these women an opportunity to understand the great mystery and miracle of life within their womb, so they can make a more informed choice about the direction they want their pregnancy to take. Cindy says, “About 80 percent of women that are considered abortion-vulnerable end up keeping their baby after viewing their ultrasound”.