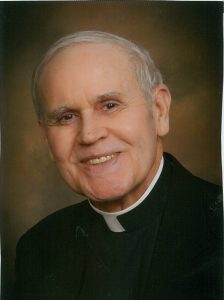 Father Daniel DuChez, at the age of 77 and a priest for 31 years, died Thursday March 1, 2018 at Benedictine Manor Skilled Nursing Facility in La Crosse.

Daniel Bartholomew DuChez was born on August 24, 1940 in Cleveland, Ohio to Louis John and Margaret Mary (O’Malley) DuChez. He attended public schools in Lakewood and North Olmstead, Ohio. The example of his father helped him to decide to become a priest at the time of First Holy Communion. After high school, he was enrolled in the pre-theology program at John Carroll University where he earned a B.A. degree. After trying Jesuit life in two novitiates, he taught fifth grade at two Catholic schools in Ohio. With the support of the Ohio Board of Education, he obtained a Master in Education degree at Kent State University and for two years worked as a rehabilitation counselor in Cleveland. For two and a half years he worked for the Little Sisters of the Poor in Chicago, as a custodian and night watchman, while he continued to discern his vocation. For five years he lived the strict hermit life of a Camaldolese monk in Big Sur, California and was sent to complete the required studies for priesthood at Sant Anselmo in Rome. While in Rome, his spiritual director convinced him that he needed to seek a more active ministry. On May 25, 1986, Father DuChez was ordained a priest at Saint Peter’s Basilica in Rome by Pope Saint John Paul II for the Diocese of Ponce in Puerto Rico.

For about two years, Father worked in the Roman Curia as a secretary aide of the director for Catholic Near East Welfare. Still drawn to the contemplative life, Father DuChez was chaplain for Discalced Carmelite Nuns from 1988 to 1996 in Saint Agatha, Ontario, Canada and in Georgetown, California. In November of 1996, he was accepted as associate pastor at St. Charles Borromeo in Chippewa Falls, St. John the Baptist in Cooks Valley, and St. Peter in Tilden, Wisconsin. Father was incardinated as a priest into the Diocese of La Crosse on May 31, 2002 and the following year he began as the Catholic Health Care Chaplain for the Chippewa Falls Deanery serving the spiritual needs of those in 18 facilities in the Chippewa and Eau Claire counties. On his 70th birthday, he was granted the status of senior priest and he moved to Holy Cross Diocesan Center in La Crosse. From September of 2012 up to the Sunday before his death, he offered Mass nearly every Sunday at Benedictine Manor in La Crosse.

The Mass of Christian Burial will be celebrated at Christ the King Chapel within Holy Cross Diocesan Center in La Crosse on Tuesday, March 6, 2018 at 10:30 a.m. Visitation will be held at Christ the King Chapel one hour prior to the Mass. Most Reverend William Patrick Callahan will be the main celebrant and Very Rev. William A. Dhein will be the homilist. A luncheon will follow at the refectory of Holy Cross Diocesan Center.

At a later date there will be a visitation and a Mass with final commendation at St. Bernadette Catholic Church in Westlake, Ohio followed by burial at Holy Cross Cemetery in Cleveland, Ohio.