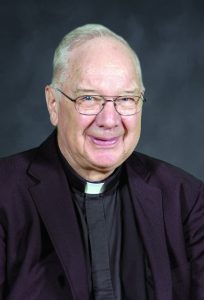 Father Raymond J. Pedretti, at the age of 89 and a priest for 62 years, died Thursday May 10, 2018 at his home on Brice Prairie in the Township of Onalaska.

Raymond Joseph Pedretti was born on December 28, 1928 in Genoa, Wisconsin to Albert and Helen (Venner) Pedretti.  He attended Mound Ridge Elementary School in Genoa and Salvatorian Seminary in Saint Nazianz, Wisconsin for high school and two years of college.  He completed his Bachelors of Arts degree in philosophy at Saint Francis Seminary in Milwaukee and went to Saint John’s Seminary in Brighton, Massachusetts for theology.  On February 2, 1956, he was ordained a priest at Christ the King Chapel in Holy Cross Seminary in La Crosse by the Most Reverend John P. Treacy.

On June 26, 2000 he was granted senior priest status.  He moved to the rectory of St. Mary of Mount Carmel Parish in Fancher to help his brother, Father Robert Pedretti; in February of 2010, he then moved to into his new home on Brice Prairie.

Father Raymond Pedretti was preceded in death by his parents, his sister Jean (David) Flotmeyer, and his brother Dennis (Catherine) Pedretti.  He is survived by his siblings Lucille Pedretti, Rita (Arthur) Llorca, Rev. Robert Pedretti, and Earl (Ruth) Pedretti, his sister-in-law Cate Pedretti, and many nieces and nephews.  He is also survived by Rita Witkowski, his housekeeper of 34 years.

The Mass of Christian Burial will be celebrated at St. Patrick Church in Onalaska on Wednesday, May 16, 2018 at 11:00 a.m.  The Most Reverend William Patrick Callahan will be the main celebrant and Reverend John L. Parr with be the homilist.  Burial will follow in Gate of Heaven Cemetery.

The Diocese of La Crosse and the family are being assisted by Coulee Region Cremation Group in Onalaska.