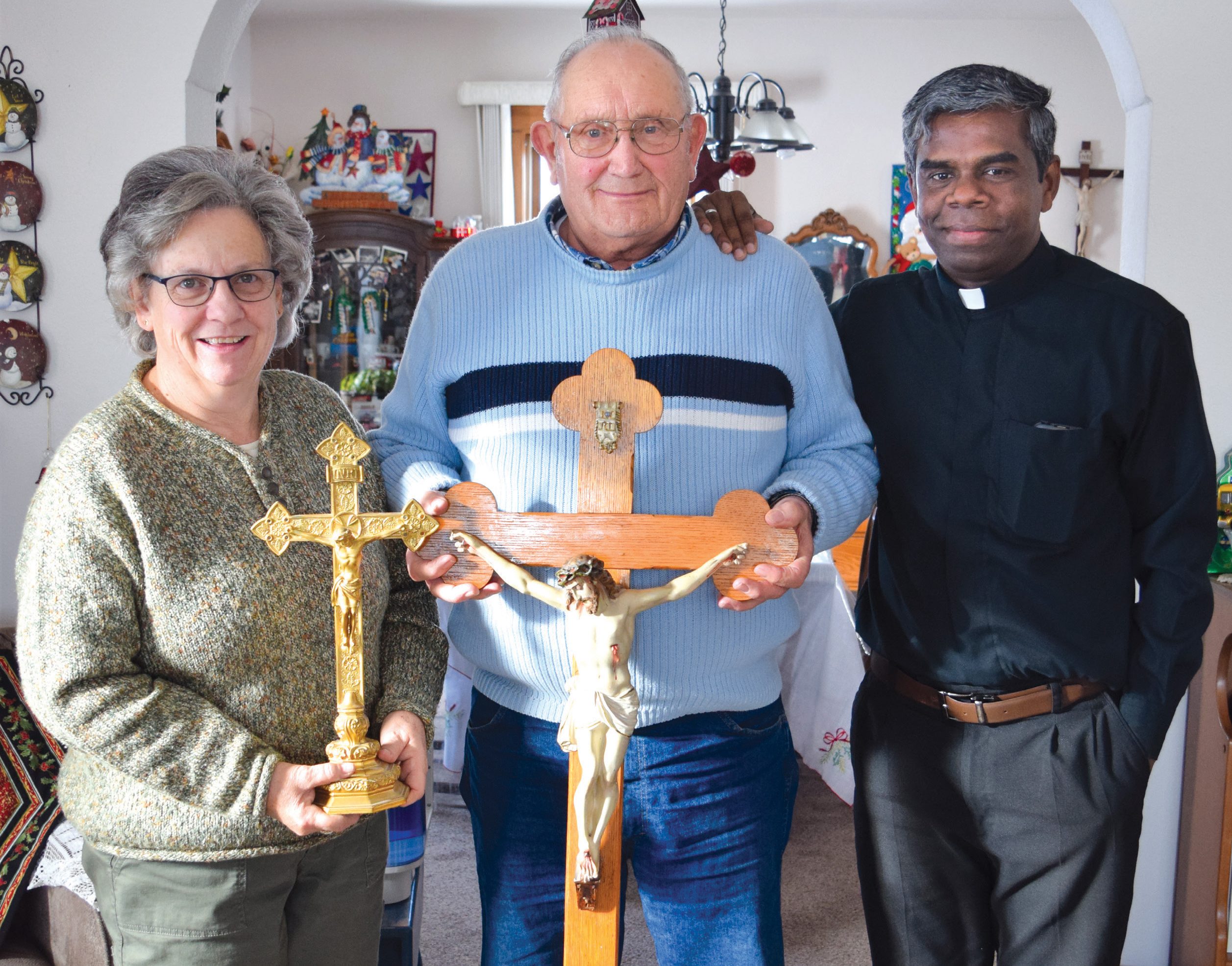 The story of a man, a parish and the faith and history they share 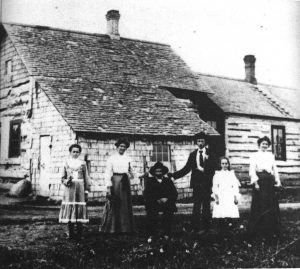 Peter, William and family pose in front of their first home, a log cabin, built on the farm shortly after the family settled in the area.

William “Bill” Hahn grew up a hardworking farm boy just outside the small town of Pittsville. He grew up at a time when a firm handshake was synonymous with a solemn promise and that, at all times, “right is right.” He still adheres to those beliefs and lessons that were instilled in those early years, both by his family at home and his home parish, St. Joachim in Pittsville.

While setting up homesteads and livelihoods, early settlers of Pittsville also were eager to set up church services, so a group of Catholic families contacted Father Charles Bayerle of SS. Peter and Paul Parish in Grand Rapids (now Wisconsin Rapids). In 1879, Father Bayerle came to celebrate Mass for the first time in the home of Lawrence Ward. After that, he continued celebrating Masses for the people of Pittsville once a month in the homes of Catholic families.

St. Joachim Mission Church was then built in 1887, with a congregation of 80 members. One of the charter members was Peter Hahn, Bill’s grandfather.

The parish did not receive a resident priest until 1908, when Father John Willitzer, ordained just six months previously, was appointed. He served as pastor of St. Joachim for 38 years, until his death in 1946.

Father Willitzer and his parish worked and sacrificed, growing the parish and even building a new church in 1912 to accommodate more families. By 1921, a grade school was constructed and staffed by the School Sisters of Notre Dame. The school operated until 1972. A high school called “Maryheart” was also run in the building from 1948 to 1961, welcoming students from Pittsville and surrounding communities.

Bill and his siblings began school at Pleasant Corners, just down the road from their farm, but when Father Willitzer made it clear that “Catholic children should go to Catholic schools,” they began making the four-mile trek to and from St. Joachim Church. Bill spent his seventh- and eighth-grade years there and laughingly recalled his encounters with Father Willitzer: “’Hahn, fill my wood box,’ he would tell me. And I did. Then, at the end of the year, I either got a nickel or a big apple.”

“Life on the farm was work,” explained Bill’s oldest brother, Don, in a personal history published by the Pittsville Historical Society. Bill, like his siblings, began milking cows before he even started school.

The family also grew beans, cucumbers and beets to sell to the canning factory in Pittsville. The kids did much of the picking. “Whatever work needed doing, we did as our age and strength allowed,” Don shared.

After completing eighth grade, Bill returned to the family farm to work. World War II was in full swing and workers were in short supply. He remembers planting acres and acres of beets and beans and admitted, “I couldn’t wait until the first frost,” knowing the work would then finally let up a bit.

Bill went to Rockford, Ill., to work when he was 18. He stayed for 11 years and there he and his wife, Charlene, began their family.
It was also in Rockford that Bill met Father Gordon who, “straightened me out and was like a dad to me,” explained Bill. Father Gordon was pastor of St. Bridget Parish, which relied on an old Army barracks for its church building and where Bill attended and volunteered.
In 1954, during a particularly difficult time in his life, Bill “promised the Blessed Lady that if she would help me, I’d pray a rosary every day. And since 1954, I’ve never missed a rosary, unless I was sick. And I’ve said a lot more than one a day sometimes, because when I was driving semis, those bad nights I had the rosary in one hand … and a cigar [in the other].

“I promised the Good Lord,” he continued, “that as long as he keeps me going, I will do His work.” And he has.
Bill and Charlene had four children: Steven, Christine, Candis and Carla. They moved back to Pittsville in 1962. Bill hauled milk for Dairy State Cheese, drove semis and then became a school bus driver, a job he continues even today at 85 years young! 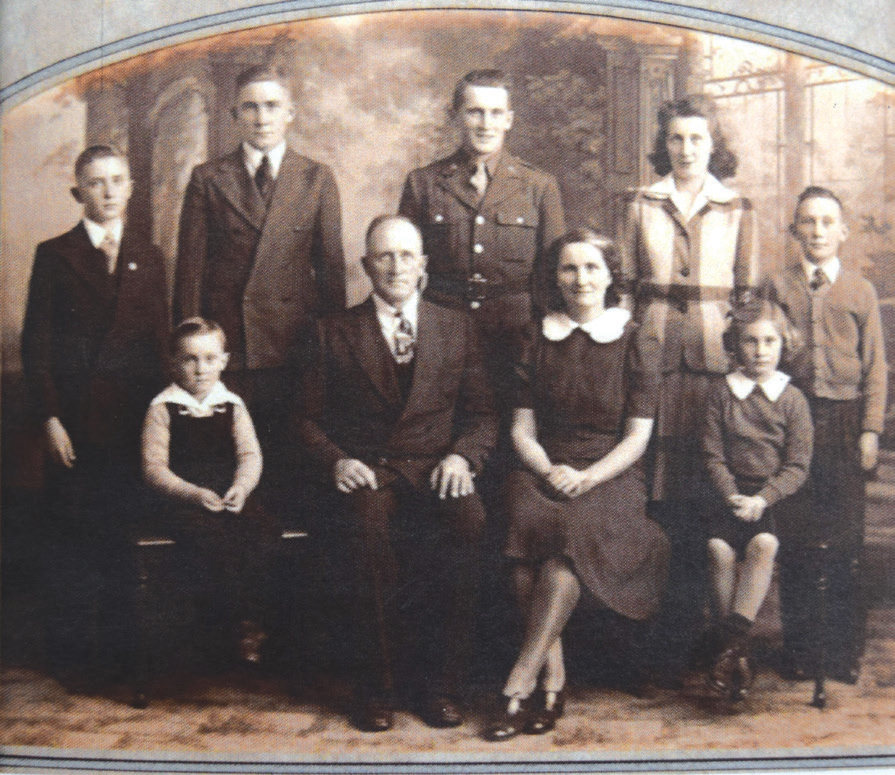 In 2001, Bill’s wife Charlene died of complications from an illness, leaving Bill holding even tighter to his faithful promises, and also to the consoling arms of his children, family and parish. In 2006, he remarried after reconnecting with a decades-long acquaintance — Kathy — whose family farm had actually been on his milk route. Kathy’s husband had recently died as well, and the couple’s youthful energy, great love for their families and enthusiasm for serving the church made them a great fit.

Ever since moving back to Pittsville, Bill has been involved with the Holy Name Society at St. Joachim, serving in many capacities. He has been a Knight of Columbus for 45 years and was president of the Parish Council for many years, serving on various other committees as well. Today, he is the chairman of the Pastoral Council. Bill likes to stay involved and keep projects rolling for his parish.
“He knows everyone!” joked St. Joachim’s new pastor, Rev. Amalanathan Malaiyappan, (“Father Nathan” for short,) a quality that serves him well for getting jobs done. Bill praises the efforts of his fellow parishioners and Irene, St. Joachim’s secretary, for all of their work and sacrifice in the many building, remodeling and event-planning projects they’ve completed. 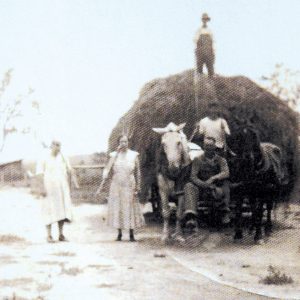 Bill’s Father, William (standing atop a load of loose hay,) and his Grandfather, Peter (sitting in front of the horse team,) work together managing the family’s farming operations in rural Pittsville.

None of the original structures remain on the St. Joachim property. What stands is the brick rectory built in the 1940s, which replaced an older one that was moved down the street. The 1912 church was demolished in 1977 to make room for a new one built the same year. But just because the campus looks quite modern, that doesn’t mean there isn’t much history left to tell.

Recalling the 1912 church, Bill shared that when he was little, he gained a great appreciation for history: “Way back in the early days of the parish, the farmers (many of whom were parish founders) would get together in the fall of the year and cut enough wood to fill the church basement. The church had one big furnace in the basement and one big register on top.

“Back in those days, we didn’t have chainsaws either. We cut everything by hand. The kids had to pile the wood up in the basement.”
Of this annual event, Bill’s reward was the stories. “You listen to all these old-timers talk,” he said, “and you learn more than if you went to college for 10 years.”

And when the parish school closed in 1972, the nuns gave Bill’s father, William, the crucifix that hung in the school chapel. It was venerated at many Good Friday services. That crucifix now hangs by Bill’s bed, along with a crucifix given to Kathy by her uncle, who was a priest. The pieces are two of the couples’ greatest treasures.

St. Joachim’s property used to house a horse and horse barn for Father Willitzer. He used to ride through the snow and cold to Altdorf, Babcock and his other missions. His big gloves from the travels are even displayed in the Pittsville Historical Museum as an ode to his service.

And like Father Willitzer’s dedication to his flock in the midst of harsh weather, the dedicated parishioners of St. Joachim Church are what keep the parish prospering. As Father Nathan said, “If we had snow like this in India, I don’t think my people would come to church.

“In India, we live around the church, really close by. But here, people are living far away from the church. Still, somehow, they are coming to the church with all these weather conditions. It’s a really amazing thing for me to watch.”
Together, Bill, Father Nathan and the community at St. Joachim Parish are excited to see what is in store for their parish in the next 100 years.

Writing and photography by Amy Eichsteadt