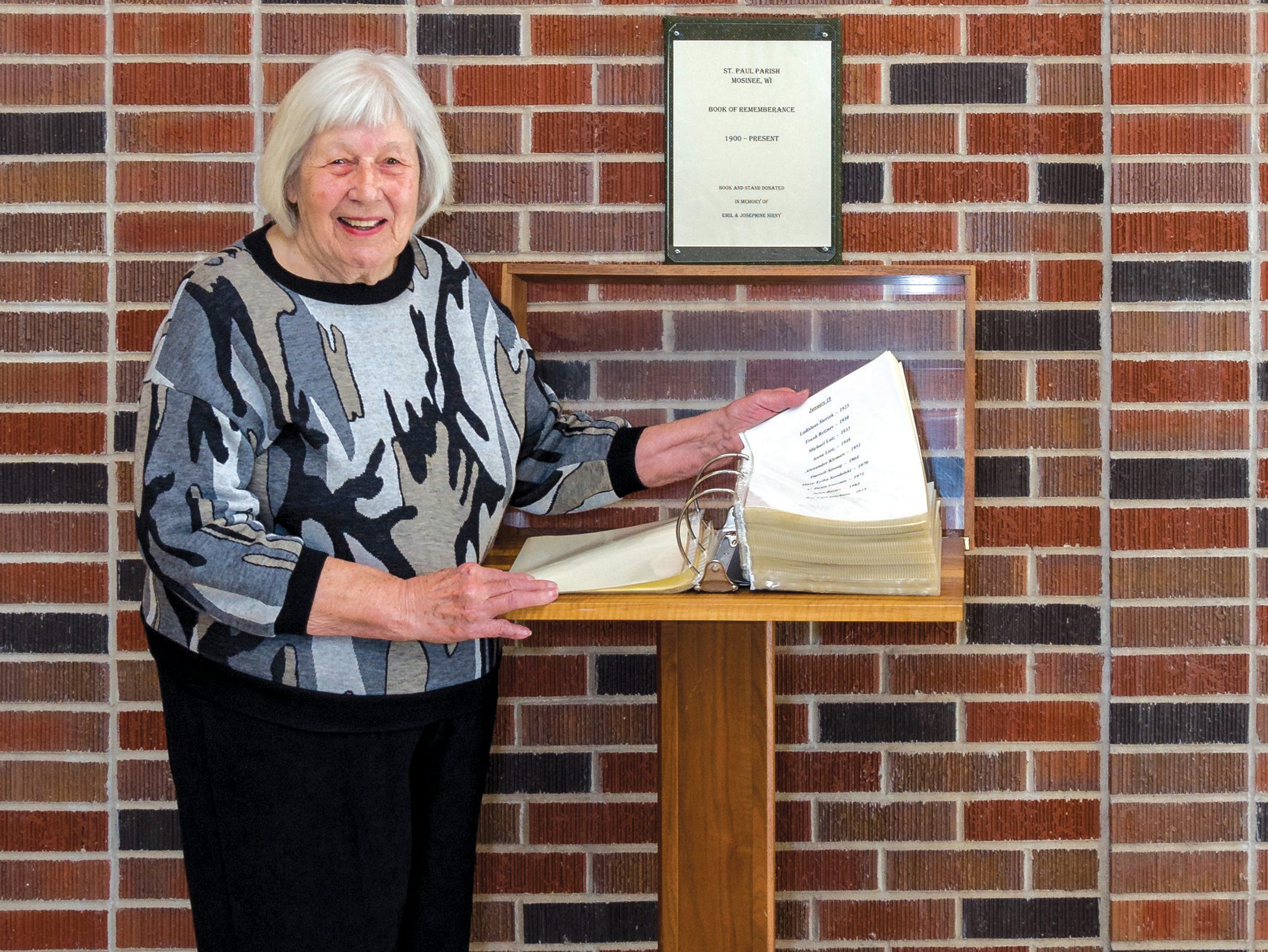 St. Paul Church was already 67 years old when Gladys Simonis Giacalone of nearby Marathon City arrived in Mosinee in 1945 as a newlywed bride. Soon afterward, she and her husband, C. Dean Simonis, joined St. Paul Parish and began raising their family of three boys. As the boys became of age, they started going to school at St. Paul Catholic School, and that is when Gladys became involved in parish life. “The nuns, you know, they were swamped with work and so another gal and I volunteered every Tuesday to correct papers, run the mimeograph and to help out wherever needed.” 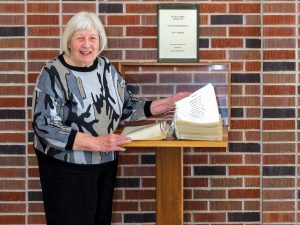 Gladys Simonis Giacalone at the Book of Remembrance in the new church, which lists St. Paul Parish members who have died from 1900 to the present. The book and stand were donated in memory of Emil and Josephine Sirny, and are placed in front of a wall containing bricks from the old church.

Gladys continued to be involved with the school long after her sons graduated, and that activity led to other parish experiences. She joined St. Monica’s Society, which had its beginning at the time the parish was established in 1878, then known as the Altar Society. This organization was originally formed to care for the altars. “Just as the Mother of Christ stood beside her Son in all His works, so St. Monica’s Society was, and still is, ever present to aid Holy Mother the Church, namely our own St. Paul Parish.” However, its role expanded to include fund raising activities such as bake sales, which supported church and school needs.

As school and parish demands grew, Gladys willingly accepted new responsibilities, even at a time of suffering the loss of her husband, Dean, in 1971. Secretarial assistance was needed at the rectory, and so Father Joseph Tetzlaff, who was pastor from 1958-1987, asked Gladys to be the parish and school secretary, a post she occupied for 20 years until her retirement at age 65. Asked if this was a trying time for her, Gladys responded with a story: “I had a load [on me] … but still it was a good time. I couldn’t wait to get to school because there was one little boy … he would always want to come up to me to empty my wastebasket. I’m telling you … those kids … they were my life … they were what kept me going.” She continued, “I was called upon to babysit in the classroom when the nuns were called out of class. Before Sister would leave she would give the kids something to do. This little guy [first-grader] was sitting in the front row and he was not working, while the others were busy. I went over and said, ‘Tom, what’s wrong?’ He said, ‘Gladie, I’m bored.’ Now if you don’t think that [his honesty] made my day!” Gladys still corresponds with three of the former school nuns who now live in La Crosse.

Gladys was named Secretary of the Month by Today’s Catholic Teacher in its May/June 1987 issue. The magazine said this about her: “This vivacious, hard-working, Christ-like, and competent secretary is completing 20 years of valuable service to our school … She is also parish secretary, lunch program coordinator, interim nurse and director of library volunteers. In March, the school honored this best-loved “saintly lady” with a Gladys Day.”

There is no doubt that her good works have shaped the St. Paul Parish community. Here are a few of the organizations/activities that Gladys has been a part of: Catholic Women’s Club, Board of Education, Home and School Association, St. Paul Cemetery Association, and The Centennial Book Committee. Gladys was a founding member of the parish board and served as its secretary-treasurer. She, along with two other members, wrote the board’s constitution and by-laws, which were subsequently adopted in the late 1960s. 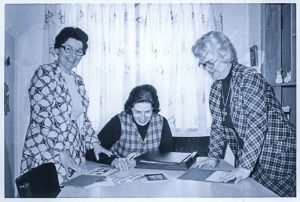 One of Gladys’ most memorable experiences was a parish trip to Rome on the occasion of the parish’s celebration of its centennial. As part of the visit to the Vatican, the group had an audience with Pope Paul VI. “The Pope came right by me. I could have reached out and touched his hand. It was so thrilling.”

Now 91, Gladys has witnessed changes to the parish over the years. When Gladys arrived in 1945, St. Paul school was seven years old and was staffed by six Franciscan Sisters of Perpetual Adoration who came from La Crosse. School enrollment grew, which prompted the addition to the school in 1959 and more teaching nuns. The Second Vatican Council led to changes in liturgies and a renovation of worship space, which was completed in 1978, the year of the St. Paul Church Centennial. The Tetzlaff Center, which provided for a real school gymnasium, a stage for plays and other productions, and additional classrooms, including science and computer labs, was completed in 1988. A new church was dedicated in 2011 after 10+ years of preparation. Items from the old church were used in the new church to provide a sense of continuity with the past. Gladys said, “Although I was sad to see the old church go, a new church was really needed.”