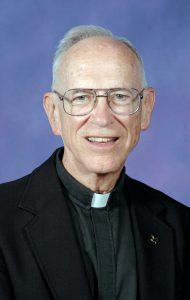 Father Edwin Joseph Thome, at the age of 92 and a priest for nearly 67 years, died on Wednesday, May 9, 2018 at Bethany St. Joseph Corporation skilled nursing facility in La Crosse, Wisconsin.

Ed Thome was born on February 22, 1926 in Grand Rapids, Michigan to Edward and Rose Frances (Theisen) Thome.  He attended the following schools in Detroit:  St. Brigid Catholic Elementary, Catholic Central High School, and Sacred Heart Minor Seminary.  He studied at St. Mary Seminary in Norwood, Ohio from 1946-47.  He worked at Ford Motor Company in Dearborn, Michigan before becoming a seminarian for the Diocese of La Crosse in 1948.  He was sent to Saint Paul Seminary in Saint Paul, Minnesota complete his seminary education.  On May 19, 1951 he was ordained a priest at St. Joseph Cathedral in La Crosse by Bishop John Patrick Treacy.

Father Thome’s first assignment was as an Assistant at St. John the Baptist Parish in La Crosse and Instructor at Aquinas High School, where he served until 1957 and 1958, respectively.  He became the Assistant Chancellor in 1952 and two years later he was the Promoter of Justice in the Matrimonial Tribunal.  In September of 1957, he became the Chaplain at Aquinas Convent with residence at Saint Michael Home for Children.  In June of 1958, he became the Principal of Newman High School in Wausau and spent the summer of 1959 studying at the University of Detroit.  In addition to his administration responsibilities at Newman High School, Father Thome was assigned Pastor at Saint Agnes in Callon (Weston) in September of 1960.  He served in Wausau until June of 1963, when he was assigned the Pastor of St. Joseph Parish in Stratford.    During this time, Father Thome was appointed Chairman of the Commission on Ecumenism and worked with the Post-Council Christian Renewal Program.  In August 1968, he was assigned as Pastor to St. Thomas More Parish in La Crosse until he granted a Roman sabbatical in September of 1974.  When he returned home in January of 1975, he was assigned as Chaplain to the Roncalli Newman Center in La Crosse for five months and then assigned Pastor at St. John Nepomucene in Prairie du Chien.  At the beginning of 1978, he was appointed the Dean of Prairie du Chien Deanery for three years.  In July of 1982, Father Thome was assigned as the Pastor of Holy Ghost Parish in Chippewa Falls and the Administrator of St. Bridget’s Mission in Springfield until he was assigned as the Pastor of St. John the Baptist Parish in Plum City on May 16, 1989.  At the end of 1991, he was elected to the Presbyteral Council for a three year term and was re-elected for another three year term in 1994.  In June of 1993, he was assigned Pastor of St. Mary’s Assumption in Durand where he served until he was granted the status of senior priest on July 1, 1996.

In his retirement, he served as the Delegate for Charismatic Renewal for two years.  He lived and generously served at St. Patrick Parish in Onalaska, Mary, Mother of the Church Parish in La Crosse, and St. John Nepomucene Parish in Prairie du Chien.  On May 23, 2007, Father Thome moved to Holy Cross Diocesan Center in La Crosse and lived there until April 20, 2013 when he became a resident of Bethany St. Joseph Corporation skilled nursing facility in La Crosse.

Father Thome is survived by two sisters, Marie Kennedy in Detroit, Michigan and Sister Noreen Thome, a Servant of the Blessed Sacrament, in Waterville, Maine.  He is also survived by many nieces and nephews.

He was preceded in death by his father and mother, one brother Raymond, two sisters, Ruth Thome and Mildred (Don) Lark, and brother-in-law Everett Kennedy.

The Diocese of La Crosse and the family are being assisted by Blaschke Schneider Funeral Home.