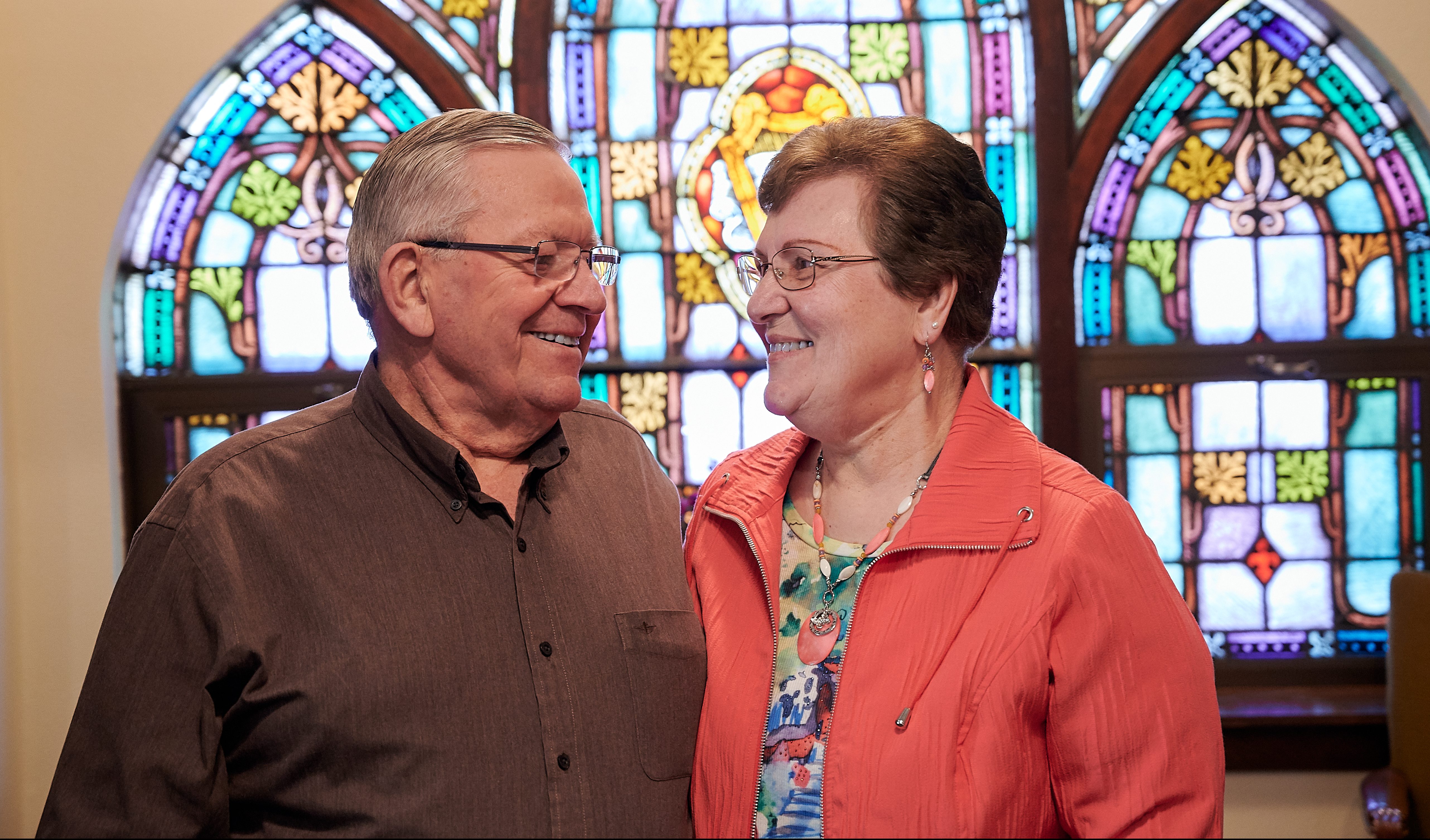 Auburndale and Hewitt are typical of the small towns in central Wisconsin where farming, particularly dairy farming, is a common way of life. It was a pastoral way of life for Regina and Donald that centered around their Catholic Faith. Regina said, “Our Faith was lived by example in our families. Going to church and helping where needed was top priority. We were both taught respect for others and to live by the Ten Commandments.” Farmers needed to rely on each other for help.

As in many small-town farming communities, families belonged to different Faiths, which traced back to their ancestral roots. Some were Roman Catholic like the Dillingers, while others were Protestants, often Lutheran. During the time that Regina and Donald were growing up, ecumenism was not common, especially between Catholics and Lutherans, but the beginnings were there in some people. The Holy Spirit is always alive and working in us. This was true for Regina’s dad. She said, “My dad instilled in us that good Christians were always there for their family, friends and neighbors, regardless of their religion; not you are Lutheran, and I am Catholic … I always felt that my dad was ahead of his time.” She recalled him saying, “[We were] to treat others the way we would want to be treated.”

Donald experienced the beginnings of this ecumenism during the time that Father George Passehl was pastor of St. Mary Parish in the 1970s. “I remember that we were going to celebrate the Passover dinner and he invited the Lutherans to attend. He arranged the seating so that the Catholics were on one side and Lutherans on the other, so they had to look at each other. These were my friends. Later on, one of my friends remarked that this was one of the best things that happened in this town. We are all friends in Christ.”

Regina and Donald live their Faith by the example set by their parents and reinforced in their parish communities. “We were always taught to put our trust in God, and He would always be there for us through good times and hard times and, also, that there is great power in prayer. While we don’t always get what we pray for, God will always answer our prayers in the way He sees fit. No matter how hard it is, we have to trust God,” said Donald

There are times of happiness and times of sadness that every family experiences along life’s journey. Regina said, “I had a sister that was sick as a child and was in the hospital for over a year with rheumatic fever. Tough times for my parents, because there were seven of us kids. Our neighbors were wonderful. They all pitched in and helped us, and my dad reciprocated. When my sister was so sick, my grandma and grandpa would come and stay with us kids when mom and dad were gone, and we prayed. We prayed the rosary all the time because that’s the only thing that was going to help her—trusting in God. She recovered from her illness, but with a damaged heart. Subsequently, she died in childbirth at age 27 because of her weakened heart, but she gave us a wonderful niece.”


“Without our trust in God, I don’t know how we would have ever made it through this.”

Memorable is the time when Regina and Donald met for the first time. Regina recalled, “It was a blind date. I would baby-sit for my brother and his wife on Friday night and the next day somebody would come by and pick me up to go to a dance. My girlfriend was dating Donald’s friend. They were the ones that stopped by and Donald was driving.” Donald and Regina married and had four children. Donald worked at farming for a couple years and then was custodian at the Auburndale Elementary School for 37 years. He also drove a school bus for more than 44 years. Regina worked as a customer service representative and insurance agent for 41 years in Auburndale and Marshfield.

Regina and Donald’s Faith that was so strongly rooted in their families’ fabric continues to sustain them after they experienced a series of personal tragedies. Donald nodded his head. With emotion, Regina said, “I lost a younger sister, Sharon, age 66, on July 7, 2018, to multiple health issues; four months later, on Nov. 3, 2018, our oldest son, Michael, who was 53, died of cancer; and our second-oldest son, James, age 52, died on Jan. 21, 2019, of a sudden heart attack.” Regina reflected, “Without our trust in God, I don’t know how we would have ever made it through this.”

Their Faith and trust in God are reflected in the many ways they have helped in the past and continue to help St. Mary Parish community. Donald is an usher; they are both extraordinary ministers of holy Communion. Regina is an active member of the Parish Council of Catholic Women (PCCW) and Donald is active in the Holy Name Society. As members of these organizations they work side-by-side with others in projects that benefit parish improvements. Regina and Donald remarked, “We both try to live our Faith the best we know how—by example.”