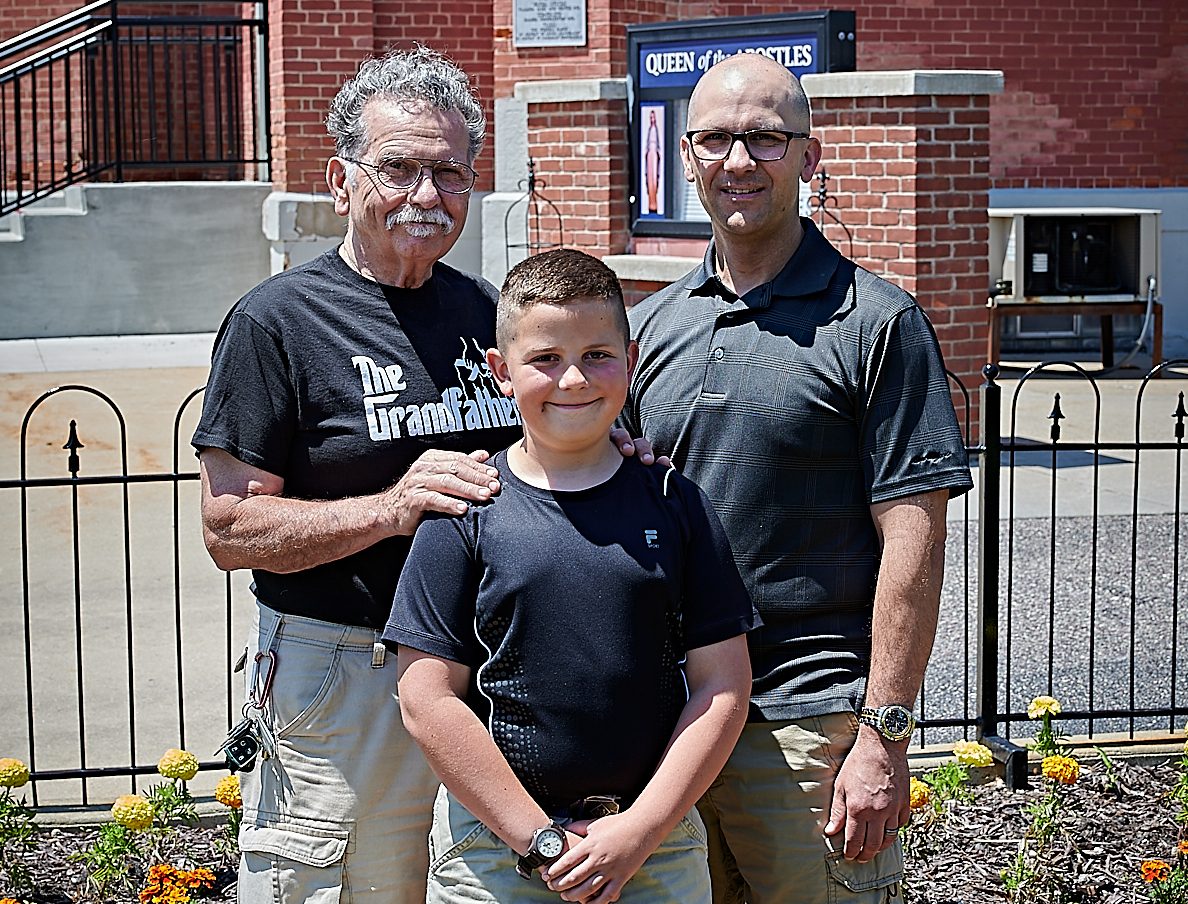 David Burbach, his son Jon and Jon’s sons, Sam, Chris and Alex, are “cradle” Catholics. They all were raised in the Catholic tradition since birth. For the Burbachs, being other than Catholic was never in the equation. Jon is very comfortable being Catholic, however, a particular experience caused a change. He said, “Before, I knew little about my Faith. Now I just can’t get enough of it.”

Those of us who have grown up in the Catholic Faith sometimes take our Faith for granted. We don’t think about it. It just is part of us. Jon said, “For a good part of my life, I didn’t really think about it, other than the Catholic Church just feels like home. When I went to college, I wasn’t always faithful in attending Mass, although I did not miss much. And if I did [miss], it did not feel right. When I was in the military and deployed a couple times having the opportunity occasionally to go to Mass, it just felt that it was something that I needed.”

“before, I knew little about my Faith. Now I just can’t get enough of it.”

Faithfully attending Mass is a value that is nurtured in the Burbach family and lends itself to the feeling that they are at “home.” “Sunday Mass was just something that we did, and it was never missed,” Jon said. David said, “We always got to Mass on Sunday even when my dad would take us squirrel hunting, which we did a lot of in the fall, or fishing in the summertime. We would go 20 miles to La Crosse or 15 miles to Sparta to attend 6:30 a.m. Mass before we went out hunting or fishing. That always impressed me that Dad was worshipping God and that was first and foremost in his mind and that has stuck with me.” Alex, who is 11, enjoys serving at Mass. “I carry the candles,” he said.

Jon credits the deepening of his understanding of the Catholic Faith during his time in the military while he was deployed in Iraq. “I was lucky enough that the unit I was assigned with had a chaplain who was a Catholic priest, which is pretty rare nowadays. I got to know this chaplain and he became a friend of mine. This was a pretty difficult deployment [for me] in a lot of ways. I had some difficult issues, so having him as a support was helpful. There was also a pretty decent little Catholic community of soldiers where I was. I began to help at Mass. I was a reader and in the choir there. I joined a Bible study. These are all things I had never done before. I started to experience what it was like to be more than just a bare minimum Catholic going to Mass on Sunday.”

Interestingly, David’s strengthening of Faith was similar to his son’s and came while serving in the U.S. Navy. He was stationed far away from rural Wisconsin in Charleston, S.C. “I was lonesome, and I started going to noontime Mass on the base. After a few months, the chaplain’s assistant was assigned to go to a specialty school. So, there was a vacancy as a chaplain’s assistant, and I got asked if I was interested. I was and I spent my last year-and-a-half with my Navy service serving Mass every day, which I never did before entering the Navy. I drove the chaplain around to different functions. This experience really cemented my devotion to my Faith.”
Jon’s Faith life changed dramatically because of the personal relationship he had with the Catholic chaplain, the support of the Catholic community of soldiers and, most importantly, because of a particularly timely invitation from his father, David. Jon recalled the moment, “After I came home from my deployment, my dad invited me to go to the Men of Christ Conference, which was being held in the Milwaukee Archdiocese. [The conference] got me fired up. I started a men’s group in our parish. I participated in the La Crosse diocesan Men’s Advisory Committee. I help with the Men of the Cross Conference. I am a catechist. All this has helped me grow (more deeply in my Faith).”

Now Alex and his brothers are on their Faith journeys. Alex especially enjoys reading Jesus’ parables. “Whenever I read them, it just makes me feel happier,” he said. “My favorite is the story about the good Samaritan because it is good to know that if something bad happens to you, there are good people willing to help you.” Alex added, “My parents, our parish priest and my classmates are important in my Faith life. They help me get through hard times.”

Passing on our Catholic Faith between fathers and sons is a gift of the Holy Spirit and can occur in various and sometimes unpredictable ways. David invited his son Jon; this year, Jon is inviting his sons, Sam, Chris and Alex, to the Men of the Cross Conference in La Crosse this October.

A special rate is being offered for father-son attendees of this year’s Men of the Cross Conference held at Aquinas High School in La Crosse on Saturday, Oct. 26. Keynote speaker is Steve Ray, a dynamic convert sure to engage men of all ages. For more information, please visit: menofthecross.org