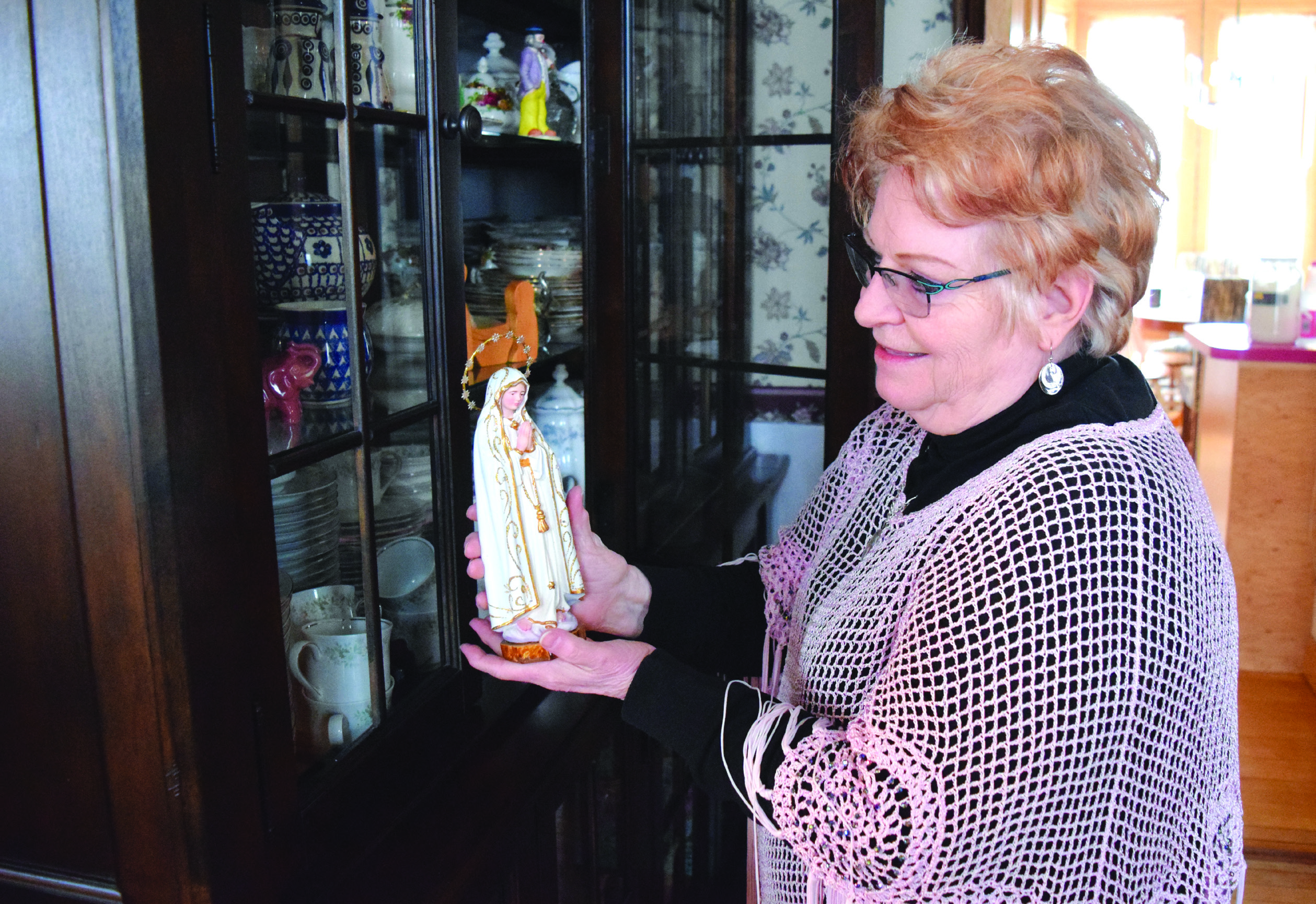 “All men and women are entrusted with the task of crafting their own life in a certain sense, they are to make of it a work of art, a masterpiece.”
– Pope St. John Paul the Great in his 1999 Letter to Artists

Marjorie Halverson of Guardian Angels Parish in Black River Falls has embraced this request to join God in crafting her story since she was very young. Her blank canvas of life began in Aberdeen, S.D., where she grew up as the oldest of seven children. Marjorie’s father was a physician and surgeon and was away from home a lot, so she needed to help with her younger siblings and was usually found with one on her hip. She recalls her childhood, “We played outside in the evenings, summer and weekends. Mom rang a cowbell to call us in for supper.” Supper was around the table for Marjorie’s family, and her grandparents joined them on Sundays

She attended daily Mass during her Catholic school years; today, she and her husband continue that tradition as often as life will allow. Marjorie’s first job was baby-sitting, a responsibility she took very seriously. She was offered many opportunities to hone her skills by the neighborhood families.

Marjorie’s schooling took her to several colleges in her home state; she ultimately graduated from Northern State University in Aberdeen with a degree in education, specializing in speech/language/hearing therapy, early childhood and special education. She got married and had three children during this time: Kelly, Shannon and Mike. Circumstances caused her and her husband to separate. In order to file for divorce and annulment, Marjorie needed to save funds, so she and her children moved to Custer, S.D., where she was a speech therapist, responsible for seven schools in the area. After working for a year, she had saved enough to file and complete the processes.

”Looking back through the rich composition of colors, lines and shapes that represent Marjorie’s faithful collaboration with God’s creativity reveals the masterpiece of her life.”

While in Custer at a teachers’ open house, Marjorie met a gentleman named Dave. After some time getting to know one another, Marjorie agreed to accompany him on a Sunday fishing date. As the relationship continued, it was easy to see Dave’s great love of her children, his generosity and his patience—qualities instilled by his parents. Dave’s father had been a Lutheran minister and his parents a devoted couple with six children. Tragically, his parents were hit and killed 47 years ago in an automobile accident with a 16-year-old drunk driver.

Marjorie and Dave were married in her back yard by a Methodist minister, surrounded only by close family. Shortly after their marriage, Dave entered the Catholic Church and adopted Marjorie’s children. They also had their marriage blessed in the Church and were able to fully partake of the sacraments again as a family.

The couple had a son, Rory, and eight years later a daughter, Lorraine, who struggled when her older siblings left for and returned from college. She missed them so much. So, between Marjorie and Dave feeling that Lorraine needed siblings near her age to grow up with, their recent purchase of a larger home and Marjorie’s experience in the classroom seeing so many children in foster care in need of good homes, they began fostering children and also sought approval for adoption.

When Lorraine was about 6, the couple was matched with a sibling pair who both were diagnosed with fetal alcohol spectrum disability. Upon their first meeting, the Halversons knew these children would be a great addition to their family and Malina and Waldon were welcomed into their home. Malina and Lorraine were close in age and became fast friends and are still close. Waldon was in preschool and Marjorie became his teacher and speech therapist.

Besides Marjorie’s work in education, a big part of her life has been her work with the deaf community. As a girl, she had a deaf friend, which got her interested in American Sign Language (ASL). She attended Masses for the deaf during college and would sign with them. She became an interpreter for the deaf community and still has deaf friends. To come full circle, Marjorie herself now has progressive hearing loss.

In 1999, Marjorie, David and their youngest children moved to Black River Falls. There, Dave secured a forestry job after his similar position in South Dakota was eliminated. With many children grown and out of the house and the others in school, Marjorie used her time to dive into volunteering at St. Joseph Parish, which the family joined upon moving (and has since combined with St. Kevin in Melrose to form Guardian Angels Parish). She has over the years served as a lector, sacristan, extraordinary minister of holy Communion (both at Mass and to homebound and nursing homes) a religious education teacher, Vacation Bible School coordinator and teacher, on parish councils, with PCCW and filling in where she is needed.

The Halversons are a close-knit family, spending as much time together as schedules allow. They have especially fond memories of their many camping adventures in and around their home in the Black Hills. Marjorie and Dave maintain a residence in South Dakota even after making Wisconsin their home, visiting when they can. The love of hunting and art seem to run in the family. These shared hobbies have, through the years, brought the family together, knitting relationships and coloring grey days.

Marjorie and her family have weathered more than their fair share of grey days. She readily admits that her story is quite “messy,” with the devastating priestly abuse of one of her sons, a divorce and annulment, multiple miscarriages, having to send her youngest son to a group home for the unique care his brain damage requires and even seeing some of her grandchildren be put up for adoption.

But even in the heartbreak of these and many other painful experiences, Marjorie refuses to let darkness overtake her Faith. “Over the years, I’ve had to find peace with a lot of things,” Marjorie admits with a smile. It is in keeping her eyes on the crucifix, keeping the Blessed Mother close and having a selfless and supportive husband that she has endured the trials.

The move to Wisconsin brought painting into Marjorie’s life. Her older children had great artistic talent, and some have made it their life’s work. But in working and raising a family, she was never able to explore and experiment with the medium herself. After meeting and taking instruction from a fellow parishioner, Mary Anne McDonald, Marjorie found a sanctuary and outlet in the new hobby. She continues to explore new techniques—her current favorite being oil and cold wax—and meeting with a group of local painters who often do community projects together. She also attends spirituality painting retreats.

Marjorie brings her artistic creativity into her religious education classes to really connect it to the religious experience. For, as God showed us, they are intricately connected. We are to be involved with His work of creating, the human craftsmen mirroring His work. She teaches and practices the technique that “each brush stroke is a prayer.”

In her later years, Marjorie has continued to battle grey days. After a terrifying fall while serving as an extraordinary minister of holy Communion at Mass in 2012, her legs became numb and she was rushed to the hospital and diagnosed with spinal stenosis. Terrible pain made walking nearly impossible. So hesitatingly, Marjorie agreed to surgery. Hopefulness quickly diminished as the surgery led to sepsis. Marjorie was airlifted for treatment. Her doctor was so concerned that he prayed for her before sending her on the flight. In the air, she experienced a bright light and was overjoyed to see God, but then suddenly awoke in the hospital in the most intense pain. She teetered on death and spent time in palliative care, suffering from discitis and loss of all function and memory. She also endured two more spine surgeries. But after much therapy and PICC line medication around the clock for many months, she regained much of what she had lost. She has had a few more health scares in the last few years, but keeping her pastor, Father Emmanuel Famiyeh’s contact information close at hand for anointing gives her peace of mind.

Marjorie considers her health a miracle. The healing and level of recovery she received allowed her and Dave the opportunity to take three life-changing pilgrimages with their dear priest friend, Father Robert Streveler. The journeys have taken them to Ireland, Fatima, the healing waters of Lourdes, Rome, where they attended Mass in the Catacombs, and finally the Holy Land, where they climbed Mt. Sinai, carried the cross up Mt. Calvary and renewed their baptismal promises in the River Jordan and their marriage vows in Cana.

Looking back through the rich composition of colors, lines and shapes that represent Marjorie’s faithful collaboration with God’s creativity reveals the masterpiece of her life. The council fathers of Vatican II, in the document Gaudium et Spes, wisely stressed the “great importance” of the arts in human life: “[It] seeks to probe the true nature of man, his problems and experiences, as he strives to know and perfect himself and the world, to discover his place in history and the universe to portray his miseries and joys, his needs and strengths with the view to a better future.”