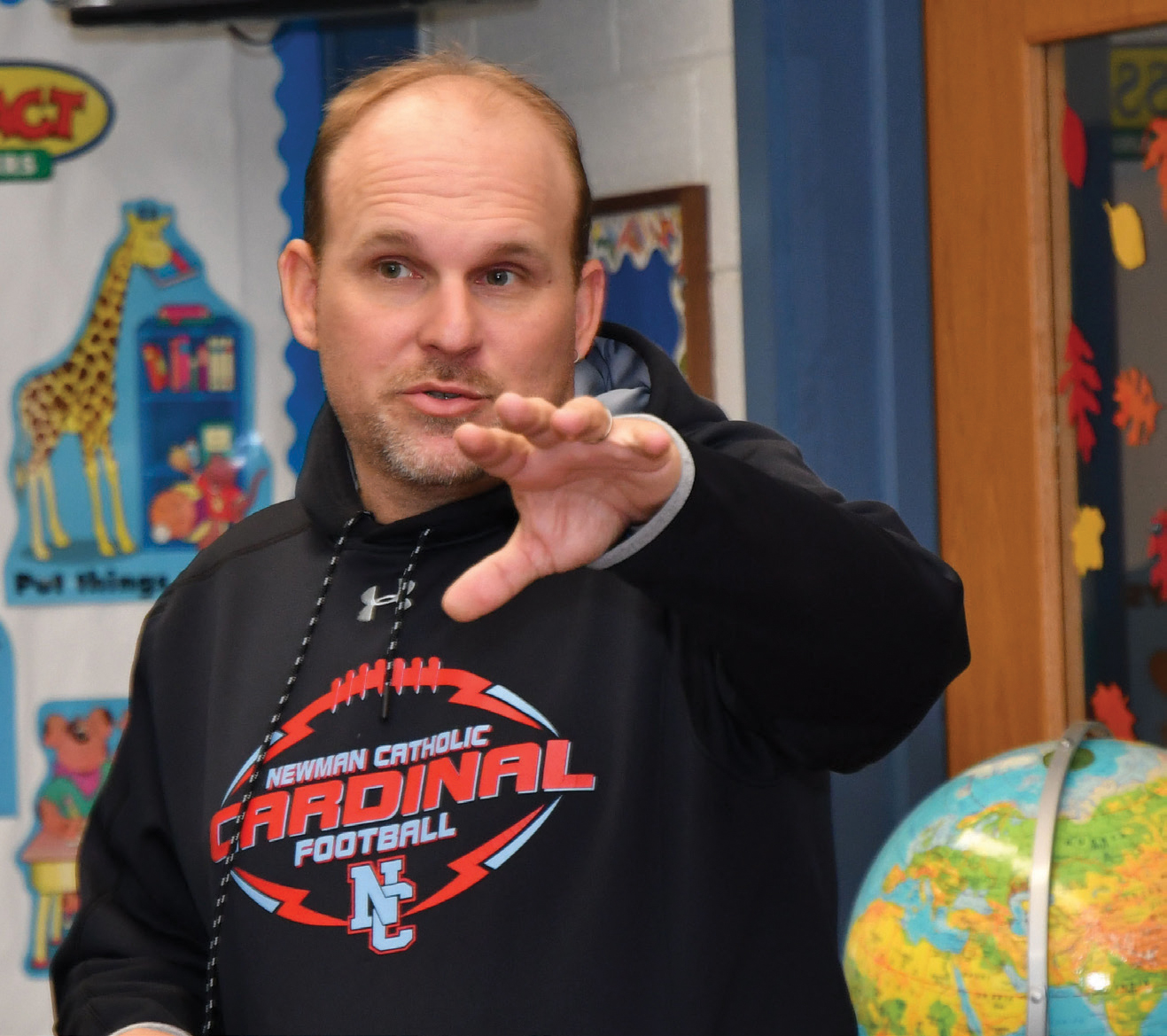 By anyone’s standards, the last couple of years have been a success for Rothschild native Paul Michlig. In 2018, he was one of only 10 Wisconsin high school football coaches named the Green Bay Packers Coach of the Week. In 2019, he coached the Newman Catholic High School football team to its first championship game. He was also the recipient of the Diocesan Holy Family Award for being a strong Catholic role model within the Newman Catholic Schools community. But for Paul, success isn’t defined by awards or accolades. “I never do things to receive recognition,” he says. “I just treat people with kindness and respect—it doesn’t matter who they are or where they come from in life—and then, if someone does the same for you, it feels pretty good.”

Living by the Golden Rule—do unto others as you would have them do unto you (Mt 7-12)—was ingrained in Paul at an early age. “My dad and mom were great role models for my siblings and me,” he remembers. “They pointed us in the right direction by how they lived their own lives. We grew up in a loving home environment where we understood the importance of our Faith. They were the first to teach us to treat everyone with respect.”

Paul attended Newman Catholic High School, where he participated in football, basketball and track. His physical education teacher, Kevin Grundy, particularly inspired him. “If I had to choose one teacher who was the greatest role model for me, it would be Kevin,” Paul says. Watching Coach Grundy positively interact with his students made Paul contemplate becoming a teacher himself. “I think in the back of my mind, I always knew I was going to become a teacher and coach,” he says.

When I see a student who is struggling and can help them through that—there’s nothing in the world like that.

Excelling at football in high school paid off for Paul, and he received a scholarship to play running back and attend the University of Minnesota-Duluth. Later, he transferred to the University of Wisconsin-Eau Claire. Even though he knew teaching would be his profession, he never dreamed he would end up back at Newman High School. “You know that old saying, ‘You can’t go home again.’ I guess that didn’t apply to me,” he says with a laugh. “Teaching at the school I graduated from was kind of surreal at first.”

Paul found his niche in teaching when he started his career in an aide position, working with students who were struggling in class. “There are lots of things in life that are exciting – getting married to my wonderful wife Ashley and having our twin sons Parker and Jackson are at the top,” Paul explains. “But the next level is when I see a student who is struggling and can help them through that—there’s nothing in the world like that.”

Coaching also became part of Paul’s daily routine. He coached basketball and track, and was the assistant football coach. But within just a few short years, Paul was asked to take over as the head football coach. “I got that job when I was pretty young. The team was in the middle of a 29-game losing streak and there wasn’t a lot of hope,” Paul remembers with a laugh. “I think the only reason I got the job is because no one else wanted it!”
Working with kids on the field allows Paul to build their trust. “There are so many ways to teach kids—it’s not always with books,” Paul explains. “The first step is to build a relationship with them. They have to trust you and feel confident that you have their best interest at heart. Once you achieve that, it opens up all kinds of avenues.

“In the summer, we have a speed camp at Newman,” Paul says. “Kids who play all kinds of sports attend. They may feel like they’re not good at this or that, and you have to find a way to build up their self-esteem.” Paul finds spending time with the kids outside of the classroom allows him to get to know them on a different level. “I get to help these kids as they’re trying to better themselves. It’s the best time to work with them. We talk a lot, which builds a stronger relationship. Then, when it comes time to return to the classroom, if they’re struggling with something, I already know about it and can provide support.”

Paul believes that being involved in sports or other activities is especially important for children of any age. “There are eight periods in a school day. I believe that extracurricular activities are the ninth period—they are an extension of the classroom,” Paul says. “I always tell kids that I don’t care if they win or lose. Every experience they have helps them develop into young men and women who will become successful as they move forward in life.” Paul says the key is to find something that you are passionate about. “I tell the kids, you may not be the best in math, but you’re great at playing a musical instrument. Everyone has something that they’re good at, so find that something and do it.”

Paul believes sports—like life—is all about the journey. “When I’m coaching football, I remind the guys that, 30 years from now, they’re not going to remember each individual game they played,” Paul says. “But they will remember this team playing together. It’s the same for a band member or someone in the choir—the time kids spend together, doing something they love—that’s what they’re going to remember.”

Unexpectedly, some of the most memorable coaching experiences for Paul happen in a church rather than on a field. “Ever since I began coaching, I made it a practice that the team and I would attend Mass together on game day,” Paul explains. “It may be in our school chapel or in different parishes where we’re playing. I’ve had the unbelievable experience of attending 177 consecutive Masses with my teams through the years. That’s pretty special! For 18 years, that’s been the best part of the season—going to Mass together.”

Paul’s enthusiasm for working with his team has paid off on the field. “We’ve put in a lot of hard work and have turned it around,” he says. “Newman converted from 11-man to 8-man football a few years ago. Last season, we brought home the first state championship football trophy in school history. It may have been a silver trophy, but I’m still pretty proud of that.”

The Green Bay Packers acknowledged Paul’s skill as a football coach when they named him the Green Bay Packers High School Coach of the Week in 2018. “It was a very humbling experience to say the least,” Paul remembers. “To think they only have a few of those a year in the whole state of Wisconsin. It just made me think how lucky I have been to have a great support staff around me and amazing student athletes that let us have the opportunity to coach them. Everything that came with that award was first class, and I wouldn’t expect anything different from that organization. It is something that I will remember for the rest of my life.”

Throughout the years, Paul has seen his career at Newman expand to becoming the athletic director and dean of students. In 2019, Paul received the Diocesan Holy Family Award for his exceptional work at the school. The award honored Paul’s ability to “help all students work toward ‘being better’ as evident in the number of students he has and continues to influence.”

Paul believes he is blessed with the right personality to be a teacher. “I really enjoy working with kids, getting the best out of them, whether in the classroom or on the field. It’s so gratifying to see them become a success.”

After almost two decades in his chosen profession, Paul finds joy in knowing he is making a positive difference in young people’s lives. “At the end of the day, the special moments come when a kid you taught has graduated, and they still come and visit you when they’re in town, or invite you to their wedding, or send you a text wishing you a happy birthday or a Merry Christmas. When those things happen, then you know you were part of their development. That you helped shape their mind and what they ended up doing in life.” Pausing, Paul adds thoughtfully, “Teaching is the greatest profession you can have because you’re molding the future of the world. There is nothing better than that.”

Published in the April issue of Catholic Life