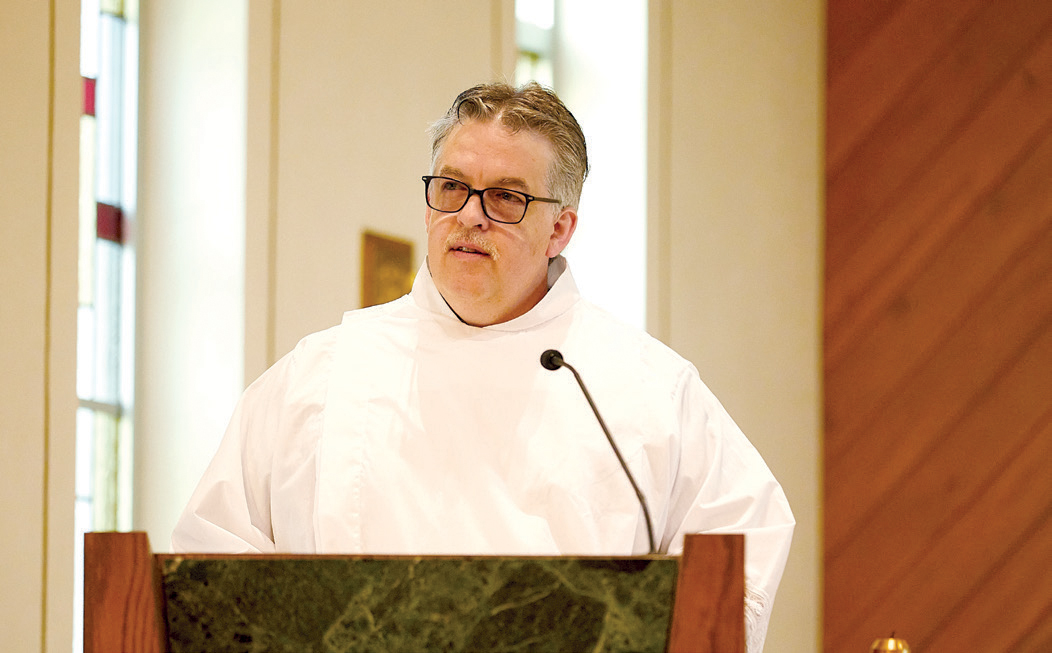 “I am a cradle-to-grave Catholic, a prodigal son and an intentional disciple,” Anthony Shay states when describing his Faith journey thus far. The 52-year-old parishioner of Annunciation of the Blessed Virgin Mary Parish in Viroqua readily admits he was a high school dropout who lost his way for a while in the secular world. But in the years that followed, Anthony found himself on an incredible, faith-filled path leading to the diaconate for the Diocese of La Crosse.

“I credit my parents with having the level of Faith that I have,” Anthony says. He grew up in what he describes as a strict Catholic household. “Our Catholic Faith has always been very important to our family,” he says. In fact, his paternal grandfather helped build St. James the Less Catholic Church in La Crosse.

As a youth, Anthony saw his father, Patrick, volunteer as a lector and usher at St. James, as well as doing jobs around the church as needed. When he was old enough, Anthony also started ushering. “But then there was a period where I fell away,” he says quietly. “I never considered myself not Catholic, but I stopped actively practicing. I went into the secular world and got lost for a while. But I felt like something was missing in my life, so I returned to the Church.”

He met his wife, Jacqueline, in 1990 and they married three years later. They moved to Westby, but there wasn’t a Catholic church in the city. They tried a few other local churches and then, one day, ventured to the nearby city of Viroqua. “We met Father Robert Cook at St. Mary’s and never looked back,” Anthony says. “We’ve been parishioners there ever since.”

Anthony has a thirst for learning and felt drawn to further his formal education through the years. He received his bachelor’s degree in psychology from Viterbo University in La Crosse, and earned his master’s degree in counseling and psychological services and doctorate in education leadership from St. Mary’s University of Minnesota. Today, he is a licensed professional mental health and substance use counselor, and a certified vocational rehabilitation counselor. Last year, he opened his own counseling center in Westby, with a Christian (Catholic) emphasis.

“Way back when I was a young kid, people told me I was easy to talk to. I guess I took that to heart when choosing my profession,” Anthony says with a laugh. “Because I understand some of the trials and tribulations that young adults can get into, I think that led me towards counseling. I like helping people. I’ve been working with people with disabilities since I was 20 years old.”

Anthony says people with special needs are especially vulnerable for many reasons. “People with disabilities tend to get looked past,” Anthony explains. “I make it a point to pay attention to them. When they know I am paying attention, it helps them feel they have value and that they are necessary, and not that they are the so-called dregs of society that people look beyond.”

Anthony says dignity is relational, influencing our beliefs, how we think and feel and act, and how we relate to ourselves and others. “We need to stop looking past people and ask, what would Christ do in this situation,” he says. “The Sermon on the Mount gives us instruction to move forward and take care of people. Treating others with dignity and respect is what matters in life and is essential to our well-being.

“If we look at respect for self and others from a Christian perspective, we know we are created in the image and likeness of God,” Anthony continues. “We are temples of the Holy Spirit, living in grace and unity with Christ. We need to treat ourselves that way, too. We were created for heaven, not for this earth. Acknowledging that gives us a completely different outlook on life; it changes the way we live and work, the way we treat others. It gives us a more positive outlook on things and transforms lives.”

Just as Anthony encourages others through his counseling services, he has had countless people encourage him in his own Faith journey. “I participate in the men’s club at St. Mary’s, and some years ago at a meeting, Deacon Don Tully asked me if I had ever considered going through the diocesan Lay Formation Institute. I had never even heard of it, so he encouraged me to check it out, and if I was interested, talk to our pastor about signing up.”

The institute is a two-year program consisting of classes that meet one weekend per month at St. Anthony Spirituality Center in Marathon. “It was an intensive program, but I knew it was something I wanted to do,” Anthony states.

He soon found himself enmeshed in the program. “Part of the process is discerning where you can become a leader in your parish,” Anthony explains. Once again, Deacon Tully was there to offer words of encouragement. “He told me that the diocese holds discernment retreats for the diaconate and asked if I would consider it. To be honest, that wasn’t even on my radar, but I went to the retreat and thought it sounded interesting. I spoke with Father William Felix and Christopher Ruff, who direct the diaconate formation, and decided to move forward.”
The diaconate program is five years in length; two years aspirancy and three years candidacy. Anthony began his second year of candidacy this fall. “It is a demanding program,” Anthony admits. “Meeting one weekend a month can take a lot out of a person, especially after working a full week at my job. But it’s all worth it. Not only do we have candidates from the Diocese of La Crosse, but from the Madison and Superior dioceses, as well. Our class—the class of 2022—is the largest to date with 17 candidates.”

Anthony says his wife completely supports his desire to become a deacon. “During the program, they tell you your spouse has to be on board with it or you won’t be allowed in the program. A deacon’s first vocation is marriage and family; then it’s holy orders,” he explains. “Jacque comes as she is able to the retreats and classes. The process is strengthening her Faith as well, and it has strengthened our marriage.”

Anthony believes deacons serve a unique role in the life of the Church. “We have one foot in Church life and one foot in our other vocation,” he says. “We have families and work in the community. I feel one major service a deacon offers is we’re integrated in the community in a way that other clerics aren’t. We are able to bridge that gap with people. There is sometimes the notion that a priest or bishop can’t understand a lay person’s troubles. A deacon would have a good understanding of all of that.” Anthony believes he can also put his counseling experience to good use. “I know the issues that drag people down, I understand all of that. The service I offer is a broad understanding of issues people bring to the table and need help with. I can bridge that gap between what the Church can offer and the difficulties they are dealing with.”

Anthony views his counseling as an apostolate. “Eventually, I’d like to work more with clerics, building my apostolate around helping them,” he says. “They can get overwhelmed in dealing with so many responsibilities, too.”

Well on his way to becoming a deacon, Anthony believes that living his life as an intentional disciple—someone who “has made a searching and deliberate act of the will to follow Jesus” (Sherry Weddell, Forming Intentional Disciples), has brought him to where he is today. “When I look back on my Faith journey, I really feel all the things I’ve done in life have prepared me for what I am doing right now,” Anthony reflects. “I began the discernment process knowing that however far I go, and regardless of the outcome, it is serving to deepen my Faith and my relationship with Christ. When you think about it that way, how can I lose?”

If you wish to learn more about the formation, life and ministry of the deacon, please contact Deacon Bryan Hilts, director of the Office of the Diaconate: [email protected]