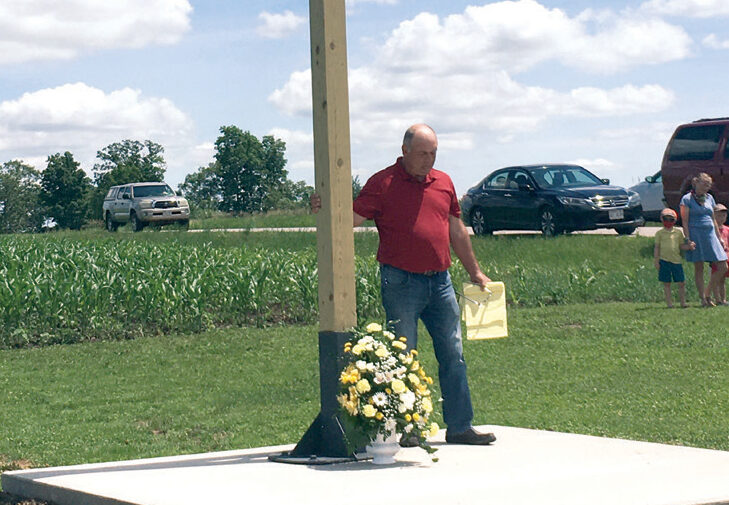 “But if he did this with a view to the splendid reward
that awaits those who had gone to rest in godliness,
it was a holy and pious thought.
Thus he made atonement for the dead
that they might be freed from this sin.”

On June 27, 2020, Father Michael Klos of Sacred Heart of Jesus Parish in Cashton dedicated the Crossroads Cross, a worldwide memorial to those whose lives have been lost to the COVID-19 pandemic. The 15-foot-high cross, a representation of Christ’s sacrificial altar, faces the intersection of County U and Olympic Avenue. Its steel base is well anchored in a slab of concrete. The six-by-six treated lumber limbs, also steel-trussed, project outward from the center, at right angles to each other, all of the cross reaching skyward. A modest wedge of farmland reserved for the cross is sown to rough grasses, bordered at the front and on two sides by the diverging roads. A sitting bench faces the cross; behind it, like a backdrop, is a field of corn growing prodigiously. The cross, like its setting, is straightforward, plain and unadorned.

South of the cross runs Olympic Avenue and the Jefferson Township garage, a shop to service trucks and tractors for maintaining town roads. The passing traffic is sparse, but seemingly constant. Many drive by without even noticing the cross. Others toot their horns. A few stop.

North of the cross and across County U is the Hemmersbach farm, the family homestead. The Crossroads Cross is John Hemmersbach’s inspiration and the work of his family, neighbors, friends and the Cashton farming community. It is as though the Crossroads Cross had grown up from these people, from this community. John says, “In order to finish something, you have to start it first.” For him, the Crossroads Cross started Oct. 16, 2013, a fateful, tragic morning. John received a phone call that morning when a young man he’d been helping, a troubled young man, lost his life in a car accident, a head-on collision with a truck. The young man was driving John’s vehicle and John was deeply affected by his death. John cites 2 Corinthians, Chapter 4, Verses 7-8, “But we hold this treasure in earthen vessels, that the surpassing power may be of God and not from us. We are afflicted in every way, but not constrained, perplexed but not driven to despair.” John says that young man’s tragic death became in time an inspiration for the Crossroads Cross. Amidst the tragedy of sudden, violent and terrible loss John learned anew that we are delivered by God’s power, and that the thoughts and prayers of others help us reveal God’s power to the world.

On Nov. 6, 2016, John was installed as head of the Purgatorial Society for Sacred Heart of Jesus Parish. Two days later, Nov. 8, 2016, he and his family prayed together with their father, Charles, as he passed away. Charles Hemmersbach became the first name recorded in John’s book of remembered souls. John has since added many, many others. There are now hundreds of names of deceased parishioners, deceased remembrances offered by friends and names of deceased whom John gleans from the news. Each day John prays for and remembers those recorded in his book.

“I regard myself as a prayer sentinel. Like my guardian angel protects me, so I try to protect others, especially those who have passed, with my prayers. You’ve got to make an effort. What do you think will happen on judgment day? We don’t know what their state of grace was when they died. These people cannot change beyond the grave. Praying for them gets easier once you make a start.” John prays for the remembered souls every day, beginning as he wakes.

After a sign of the cross, John says, “Good morning!” to each person of the Trinity, to Our Holy Mother and the saints. He thanks the angels for being by his side throughout the day. He says, “Good morning!” to all the people recorded in his book of remembrances. He recites the Apostle’s Creed, the Our Father, Hail Mary and says a prayer to St. Michael the archangel, repeating the rosary prayers throughout the day. He says the Fatima prayer and, at day’s end, he prays the Glory Be.

Pope Benedict XVI wrote in his 2007 encyclical Spe Salvi: “In the communion of souls simple terrestrial time is superseded. It is never too late to touch the heart of another, nor is it ever in vain. In this way, we further clarify an important element of the Christian concept of hope. Our hope is always essentially also hope for others; only thus is it truly hope for me too. As Christians, we should never limit ourselves to asking: how can I save myself? We should also ask: what can I do in order that others may be saved and that for them, too, the star of hope may rise? Then, I will have done my utmost for my own personal salvation as well.”

John Hemmersbach says he’d like to see each parish start a Purgatorial Society, keep a book of remembrance and erect a cross. He prays for the dead people from his parish and the people listed in his book. And now, he prays for those whom the Crossroads Cross memorializes, those who have died because of the pandemic. He prays especially for those who have died from the virus without anyone beside them, those who must die alone. “We need to choose a road in life,” John says. At the Crossroads Cross those choices are represented simply, plainly and unadorned.

The Crossroads Cross presents enduring hope, a plain statement of Christ’s sacrifice, a reminder that the resurrected Jesus is always with us. Jesus overcomes tragedy, loss and crisis. His cross resists all despair and darkness, especially the COVID-19 pandemic engulfing the world. His cross is a beacon lighting the daily routines of our lives, our homes and communities. The Crossroads Cross reminds us that the Son of God chose light, life and each of us. He chose to accept pain, suffering and death. Jesus, the source of eternal life, chose to accept and endure our most human fate, death. His cross, our radiant of hope, reaches out to us, encourages us to see and understand His perfect love.