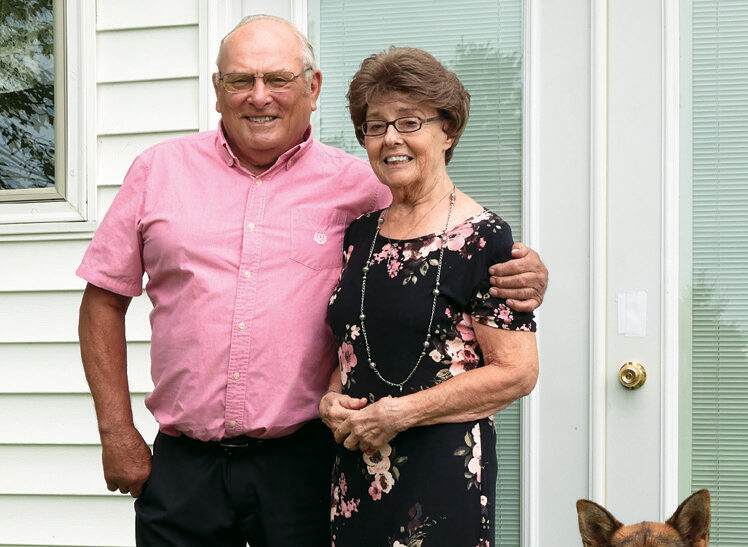 Bob and Judy Respond to the Challenges of Marriage and Parenting

Bob Kroll, Sr. turned to his friend and said, “See that girl riding the horse. I am going to marry her someday.” That girl was Judy, but it was four years before he finally dated her.

Bob and Judy first met at the local gas station in Owen, where Bob worked as an attendant. Those were the days when gas was 47 cents a gallon and an attendant would come out, put gas in the tank, check the oil and clean the windshield. Bob said, “Judy would drive up and have me put 25 cents worth of gas in the tank. She would drive off and after a while she would be back for another 25 cents worth of gas, and so on.” Bob quipped, “She had the cleanest windshield in town.”

Judy and Bob grew up in the rural countryside of Thorp/Withee/Owen in Central Wisconsin, about 10 miles apart from each other. Dairy farming was and still is a way of life for many, including Bob’s family. Judy liked living in the countryside. She loved horses and her dream was to one day have a horse ranch of her own. She also was [and still is] an accomplished guitarist and singer and played at events in the area. At one point, she managed her own band. Now, Judy sings for funerals, small parties and entertains at nursing homes once a month.

Although Bob was convinced that Judy was the girl for him at the outset, Judy initially did not have the same attraction for him. “He had black-rimmed glasses and was dressed in baggy pants and unfashionable, out-of-style shirts. Why would I go out with him?” she asked herself. “What would all my friends say?”

Eventually, Judy looked beyond the clothes and love prevailed. Bob proposed and they attended marriage preparation classes. They married in 1966 at Judy’s church, Holy Rosary in Owen. Bob’s home parish was St. Hedwig in Thorp. They began their life together. It was a happy time. Bob glanced skyward and said, “Marriage preparation classes were designed to prepare us for marriage, but they did not prepare us to be parents.”
They started a family and their lives together changed dramatically, in unexpected ways, particularly at the time their fifth child of nine was born. Bob’s dad got sick, so Bob moved his family into a 10-foot-by-44-foot trailer next to Bob’s parents’ farmhouse so Bob could help his dad. “Can you imagine what it was like to raise a family in that small trailer house?” Judy said.

After six months, Bob’s mother said to him, “Get dressed. We are going to the bank.” “Why?” Bob asked. She said, “You are going to buy a farm.” Overnight, Bob and Judy became dairy farmers, something neither one knew how to do. Bob said, “I was a good mechanic and could fix things, but I did not know how to run a dairy farm.” And Judy reflected, “The last thing I wanted to do was to be on a dairy farm and milk cows.”
After the purchase of the farm was completed, Bob’s parents moved to Bob’s grandmother’s house in Thorp and Bob and Judy moved into the farmhouse.

Thinking about the move to Bob’s family farm, Judy reminisced, “Bob knew how much I loved horses, so one of the first things to do on the farm was to get a horse. I had that first horse for 30 years. I’ve had many since.”

Life on the family dairy farm was difficult for the Krolls. Bob’s dad passed away and Bob had to manage the farm with the help of his family. Income was meager and it was a struggle to meet the bare necessities. When she could, Judy would play her guitar and sing at band engagements to supplement family income. The days were long for Bob, usually 16 hours, and the work hard. “When I wasn’t tending cows, I was fixing my farm machinery that had broken down,” Bob recalled.

Despite the rigors of life on the farm, the Krolls enjoyed happy family times. Bob recalled taking family trips to various destinations in Wisconsin, usually off the beaten track. But, as time went on, the demands of running the farm took its toll on family life. The long hours attending to farm chores and Judy’s time spent on music engagements to supplement farm income meant little or no time for family. Bob and Judy were not prepared for parenting under these conditions. Stress levels in the family increased. They reflected, “Our kids were not always treated like they should have been. We didn’t realize how our behavior towards them was affecting their lives and feelings. All we thought about was how we were hurting.”

Not knowing how to cope with their situation, Bob and Judy began to rely on alcohol to temporarily relieve the stresses in their lives. Judy became depressed, which required medication. The situation they found themselves in was not the dream they had in mind when they first married.

Realizing their parents needed help, one of Bob and Judy’s sons, Bob Jr., suggested they attend a Retrouvaille program. After five years of urging by Bob Jr., Bob and Judy finally realized something had to change in their lives or there would be no life. They stopped using alcohol in 1996, but that was not sufficient to heal their marriage. Finally, in 2011, they registered and attended a Retrouvaille program held at St. Anthony Spirituality Center in Marathon. Retrouvaille is a program about improving communication, building a stronger marriage and helping couples rediscover the love they had for each other.

Judy and Bob initially did not think the Retrouvaille program would work for them. Their spiritual adviser suggested they give it time. Judy recalled this turning point: “I was alone in my room Saturday night [at St. Anthony Spirituality Center] thinking about my marriage and whether this program would help. I happened to gaze at the crucifix hanging on the wall of the room. As I looked at it, a faint soft glow appeared around the edges. I looked for a lighting source in the room but could not find one. Just the soft glow of the crucifix. Afterward, it occurred to me, that this was a sign that God was with me [and things would work out].”

The Retrouvaille program helped Bob and Judy regain the feelings they had for each other when they first met. They no longer abuse alcohol and Judy no longer suffers from depression. They volunteer their time in Retrouvaille helping other couples in need and urge Catholic communities and leaders to consider developing and supporting a parenting program. Judy said, “Our marriage is like black and white now. We love each other more than ever. Sure, we have our spats, but because of what we learned from Retrouvaille, they don’t last long.”