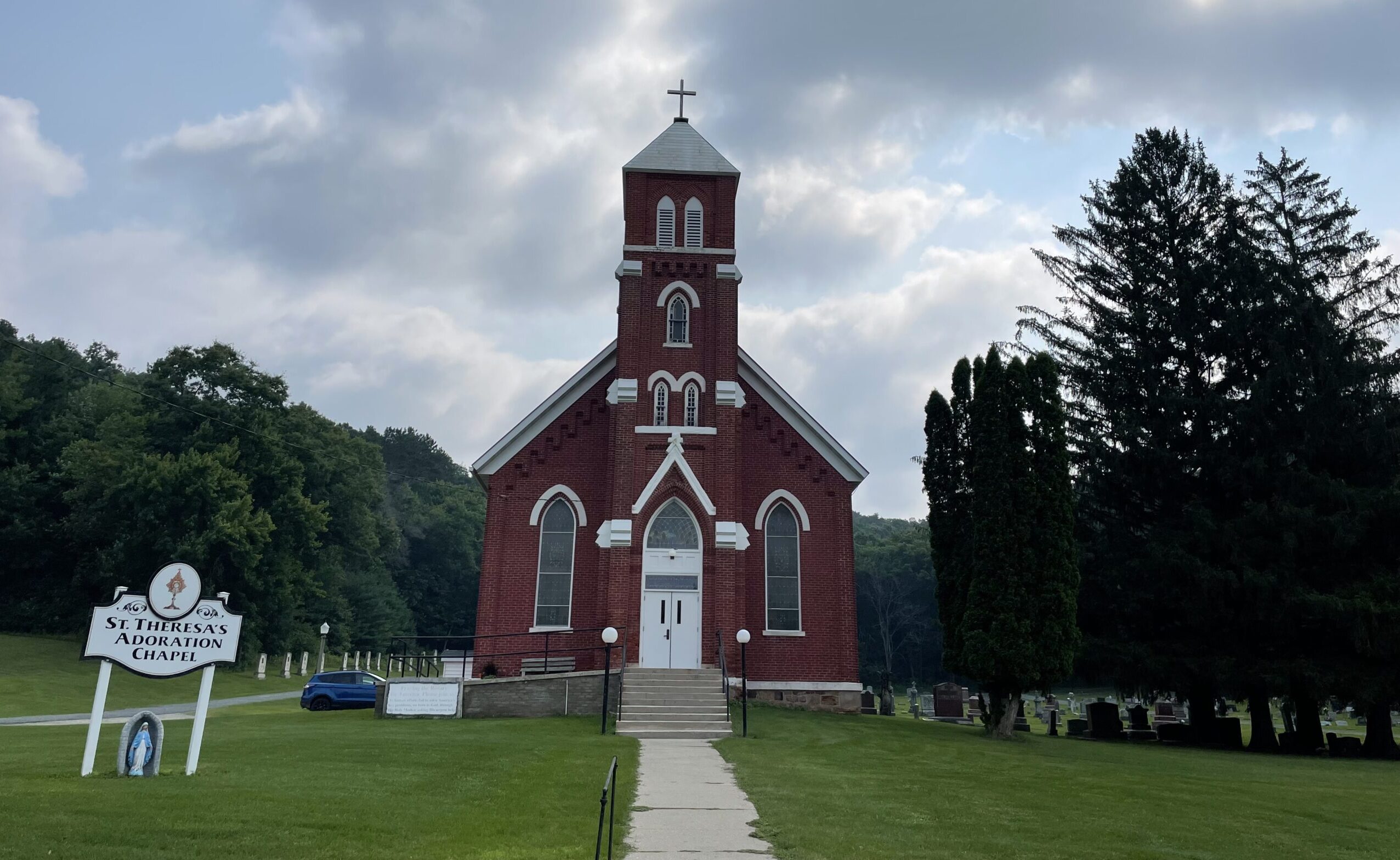 Union Center, a village of about 200, is located deep in the heart of the driftless region in Juneau County. The descent into town opens into a valley where the St. Theresa Adoration Chapel, nestled unassumingly in the valley’s back corner, resides. Passersby might not realize the decades of devotion and dedication that made this perpetual adoration chapel possible, but the hours and years of prayer are all worth it for Beverly Cousineau. “You know,” said Bev, “I couldn’t tell you how many times I have been alone with the Lord in the chapel, even late at night, to have a stranger walk in to pray.”

Bev’s brown tresses frame her face as she smiles, thinking of her many answered prayers, even before she stepped foot in the chapel. Her face softened, and subconsciously she reached for the Miraculous Medal resting on her neck as she recounted the beginning of her story. “I was a fallen away Catholic. I had feelings about the Church that were stumbling blocks I couldn’t resolve,” she explained. “But time and again, my prayers have been answered.” It may have taken eight years for her conversion, but Bev’s Faith is now the center of her life.

She married at age 19 and, on her wedding night and thereafter, her first husband was reluctant to consummate their marriage. Feeling duped and confused, she determined to make the best of her situation. A transplant from Chicago, they moved to the area and began working for the Tomah VA Hospital as nurses. Her husband became more withdrawn, started drinking excessively and would only respond with anger when Bev attempted to talk about their relationship or faith. One day, when Bev was talking to a Catholic coworker, trying to find some consolation for her many past hurts, she was given the verse “Seek first the Kingdom of God” from Matthew’s Gospel. “It was as if, suddenly, the years of past misunderstanding, bitterness and hurt disappeared,” said Bev. “I previously promised God, ‘If You would get rid of the bad feelings I had about the Church, I would spend the rest of my life trying to be the best Catholic I could,’ and He did!”

This was the beginning of her reversion and Bev leaned deeply on prayer, reconnecting to her Catholic roots. She developed a devotion to the saints, especially St. Therese of Lisieux. She prayed her novena countless times and received so many roses in answer that she finally told her “no roses, just answer my prayers! My prayer was always for a happy marriage and for children.” During this time, after 15+ years of marriage, she discovered her husband had fallen into an addiction to prescription drugs. On the advice of their pastor, when Bev felt she couldn’t take anymore, her husband started inpatient rehabilitation. Bev was willing to give it one more try and attended family meetings during his treatment and later, Al-Anon.

“I previously promised God, ‘If You would get rid of the bad feelings I had about the Church, I would spend the rest of my life trying to be the best Catholic I could,’ and He did!”

Ultimately, as Bev reached her 40th birthday and their relationship remained unchanged, she filed for divorce and, subsequently, there was a petition for an annulment which was granted.

Knowing St. Joseph was a powerful intercessor, having brought her dad back to Church, she turned to him to find a good spouse. Shortly after, Bev went on a youth ministry retreat at St. Joseph Convent and met her husband, Bob. Bev remembers praying to St. Therese of Lisieux before meeting his family. “When I met his mother at Christmastime, she handed me a rose! Now we have been married for 28 years.” Bev’s eyes shone with joy as she recalled their wedding and honeymoon to St. Joseph Oratory in Montreal, Canada.

They began trying for children and were met with a diagnosis of endometriosis. “In fact,” said Bev, “when I did get pregnant, my doctor was shocked because he had told us to give up.” Their son, Joseph, is their only biological child. They did, however, go on to adopt four of their foster children, Genevieve, Anna, Antoine and Jean. Bev’s prayers for a happy marriage and children were answered at last!

Pope John Paul II, in preparing for the Great Jubilee Year in 2000, called for a three-year period of preparation. In February 1999, then Bishop Raymond Burke came to St. Theresa Church to enthrone the local Knights of Columbus Council to the Sacred Heart. That night, the idea was born to use the closed church for perpetual adoration to coincide with the Jubilee Year. Bob, with the support of the St. Christopher Council, later obtained permission from Bishop Burke to begin planning. “It’s God’s work and it was the Blessed Virgin that really took over to make it happen,” said Bev. “The Knights of Columbus lacked the people to organize and sustain perpetual adoration.” Bev, not discouraged by this first setback, turned to her local prayer group the Rosa Mystica MI Prayer Village. This group of people, consecrated to the Militia Immaculata according to the formula of St. Maximilian Kolbe, took on the task along with Father Norbert Tracy SJ, then pastor of St. Jerome Parish, and many local parishioners. Bev remarked, “Fear stops many groups from doing perpetual adoration. Fear of commitment, fear of scheduling for a 24-hour operation. It is truly an experience in trusting Divine Providence and living out our consecrations to Mary, the Immaculata.”Perpetual Adoration would not have continued at the St. Theresa Adoration Chapel without the tireless efforts of the local Knights of Columbus, the Cousineau family, the Lobenstein family, the Urban family, Marie Prielipp and everyone else who dedicates so much time to keep the hours covered. “I could never get down on my knees enough to thank God for all He has done for me and for all those who have helped and supported perpetual adoration along the way,” said Bev. “God will not be outdone in generosity.”