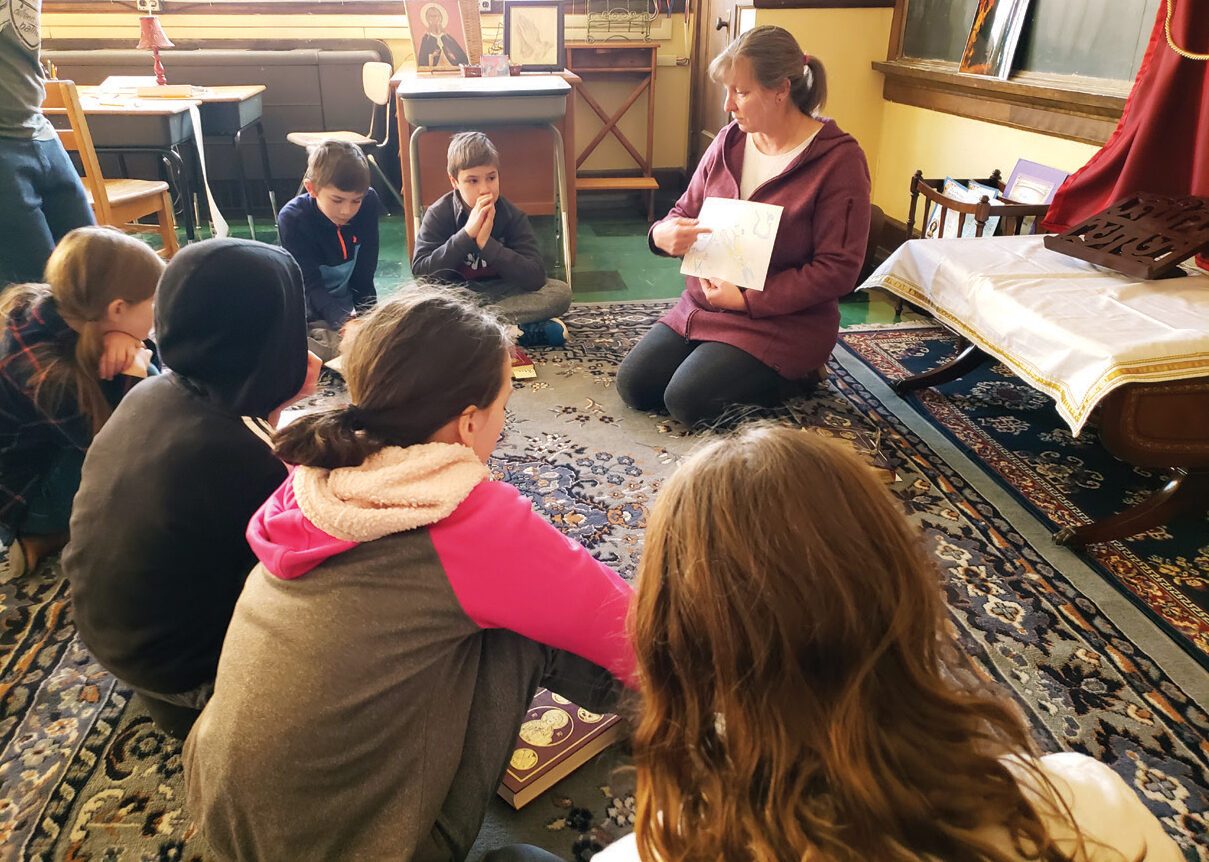 With its roots dating back to 1954, when a Catholic laywoman and Scripture scholar was asked by a friend to help prepare a small group of boys to receive First Communion, The Catechesis of the Good Shepherd (CGS) has evolved into a global method of catechesis for children up to 12 years old. Known for its prepared environment called “the atrium,” children come to know, practice and love their Catholic Faith. CGS is being used by several parishes in our diocese and many families are coming to embrace this method of passing on the Faith and growing in their relationship with Jesus Christ.

At the turn of the century, Italian physician Dr. Maria Montessori began observing children and their most basic needs. She recognized the spiritual and religious inclination of the child and the necessity for them to be an active part of parish life. Following her research, Montessorian Gianna Gobbi and Old Testament professor Dr. Sofia Cavalletti were acquainted and picked up where Montessori left off. For the next several decades they developed a unique Faith formation program which we now know as The Catechesis of the Good Shepherd.

Gobbi and Cavalletti observed and studied children working with various materials and meticulously pared down the catechetical content and materials to those which were most essential and those that spoke most intimately to particular age groups. What has evolved from this labor of love is a program through which children ages 0-12 can grow in their relationship with God through a deep engagement with Scripture and liturgy.

Pope St. John Paul II in his 1979 apostolic extortion Catechesi Tradendae explains, “The definitive aim of catechesis is to put people not only in touch but in communion, in intimacy, with Jesus Christ.” He goes on to emphasize: “It is Christ … who is taught … and it is Christ alone who teaches.”

The role of the catechist in an atrium is the matchmaker between the child and the announcement in Scripture and the liturgy. —Ruth

The Catechesis of the Good Shepherd does not take place in a typical classroom setting. Children who attend become part of a community in an atrium, the space created just for them, dedicated to their collective work and prayer. In ancient basilicas, the term atrium was used to describe a courtyard or meeting place, providing a transitional space before entering the church. Just as Maria Montessori worked to bring the child into active parish life, the CGS atrium becomes that place of preparation, a bridge into the life of the Church.

There is a focus on essentiality vs overstimulation in the atrium space and within the “catechetical” presentations. Simple and beautiful materials that most closely represent those that are found in our churches are offered to the children.

“There is a deep need met in a space prepared just for them,” Carolyn Kohlhaas, CGS trainer and Twin Cities catechist explains. “We need to give children time [in the space] so they can connect with their inner teacher through the work of their hands.” Therefore, two hours is the ideal length of a weekly atrium session. Children need ample time in the space where study, work and experience become meditation, contemplation and prayer. In this conducive environment, the child is able to listen to God, come to know Him and follow Him. Additionally, the child often brings this excitement and growth home to the family and shares the truths they have come to know, thus catechizing the family.

CGS is broken up into four levels: Infant-Toddler serves the 0-3 year old, Level 1 the 3-6, Level 2 the 6-9, and Level 3 the 9-12-year-old child. “All levels need a room that inspires them to pray in a way that is particular to them,” Ruth adds. “We offer a room that is full of materials based on Scripture and the liturgy in a 3-year cycle and the possibility for the child to freely engage with those materials they’ve already been presented.”

Father Sam Martin, pastor of Holy Name Parish in Wausau has shown his generous support of the CGS program, encouraging its growth in his community. “Any time I’ve ever spent in an atrium always moves me because of the rich silence and peace that characterizes that space. The kids are so at peace with themselves and are obviously engaged in an encounter that is not of this world. Teaching children to embrace silence is extraordinarily countercultural, not to mention exceedingly difficult. But somehow CGS gives children the ability to meet God in the silence. And they’re at an age when their souls are most naturally disposed to want to receive Him. It’s divinely inspired and the type of pedagogy that works because it completely matches the way God made us.”

“The role of the catechist in an atrium is the matchmaker between the child and the announcement in Scripture and the liturgy,” said Ruth. The catechist sits with a child or two at a small table with a diorama and reads a corresponding passage directly from Scripture or part of the liturgy. The catechist then poses meditation questions to help the child encounter Christ in the work. Once the brief, intentional presentation is finished, the child can continue to ponder the truths offered while working with the diorama and revisit that work whenever he likes. A response to the presentation is often seen through the child’s continued work, prayer, song or art response. “Children understand much more than we give them credit for,” Ruth continues. “Everything is there. We offer [the child] the little bit of spiritual food he needs to grow and to nurture something that is already well within the child that God has placed there from the beginning. And we give them the richest food: Scripture and liturgy, nothing adulterated.”

The CGS catechist is most often an observer in the space, open and receptive to the responses of the child, which can be profound. “The 3-6-year-old children amaze me as I see the Holy Spirit working in them not only by what they say but by what they draw or the material they use or gravitate to,” said Jean Kaiser, catechist at St. John the Baptist Parish in Marshfield.

We need to give children time [in the space] so they can connect with their inner teacher through the work of their hands. —Carolyn

Level 1 children are exposed to works such as the model altar, where they learn to name and properly situate the articles used during Mass onto a small altar table. They come to understand the gestures and prayers of the Mass. They learn the liturgical colors through work with miniature vestments and geography of the Holy Land through maps and dioramas that can be manipulated. The infancy narratives are taught as are many parables of the Kingdom of God. The work of the Good Shepherd, after which this program is named, is a favorite for many students. “Of all the images we offer children, Jesus as Good Shepherd has captured them most,” Carolyn explains. “It satisfies the child’s great capacity for relationship … and helps them fall in love and to love Him fully.”

“In CGS we give the 3-6-year-old child the deepest mysteries of our Faith,” Ruth explains. “After that, in levels two and three, it basically just expands in detail.” In the upper levels of the atrium, children’s growing social needs are met through greater group interaction and works that incorporate their emerging moral life. Added works include further geographic study, work with the maxims and the canon of the Bible, additional parables, the Paschal Mystery, sacraments and studies of biblical figures. But beyond the materials that are offered, the children become connected to the Scripture and liturgy they work with each week. They come to live it as an indelible part of their lives.

During her training sessions, Carolyn shares a testament to the deep and fruitful seeds that are planted through CGS when she is asked whether the program will keep children from leaving the Church. “No,” she says honestly. “But it will bring them back.” Jesus’ love and His desire to be with us are rooted so deeply in the child’s heart during his years in the atrium that even if he strays for a time, he will be more open and able to hear Jesus’ call to return.

“[CGS is] worth the effort,” said Cathedral rector, Monsignor Richard Gilles. We can’t afford not to do everything possible to build the Faith on all levels and in every available avenue.”

Summarizing her work with CGS for the past 15 years, Ruth admits, “I have learned more about my Faith from the children, especially from the 3-6-year-olds, than I had in any doctoral program that I was involved in. It is that good. You are coming to the heart of the Faith.”

As one could imagine, the training and preparation involved with undertaking such a program is substantial. But the 90 hours of training required at each level are a rich spiritual experience, even for adults not seeking to be catechists. Catechists look back fondly on this time as one of great growth and communion.

Father Michael Klos, pastor of Sacred Heart in Cashton shares, “[CGS] is an entirely new way of approaching spiritual formation in young people. It’s scary for parents and other adults because it is both unfamiliar and the children aren’t always able to verbalize what they are learning, but the results are worth waiting for, especially as their enthusiasm continues in putting the pieces together and the recognition of their real relationship with Jesus Christ. He loves them and is always with them.”

“I would encourage priests to spend some time getting to know about CGS and even spending some time in an atrium while the children are in session,” Father Martin shares. “‘By their fruits you will know them—the fruits are abundant and the harvest is great.”

For further information about how you can bring CGS to your parish or school, contact Ann Lankford, director of Catechesis and Evangelization at 608.791.2658 or [email protected]