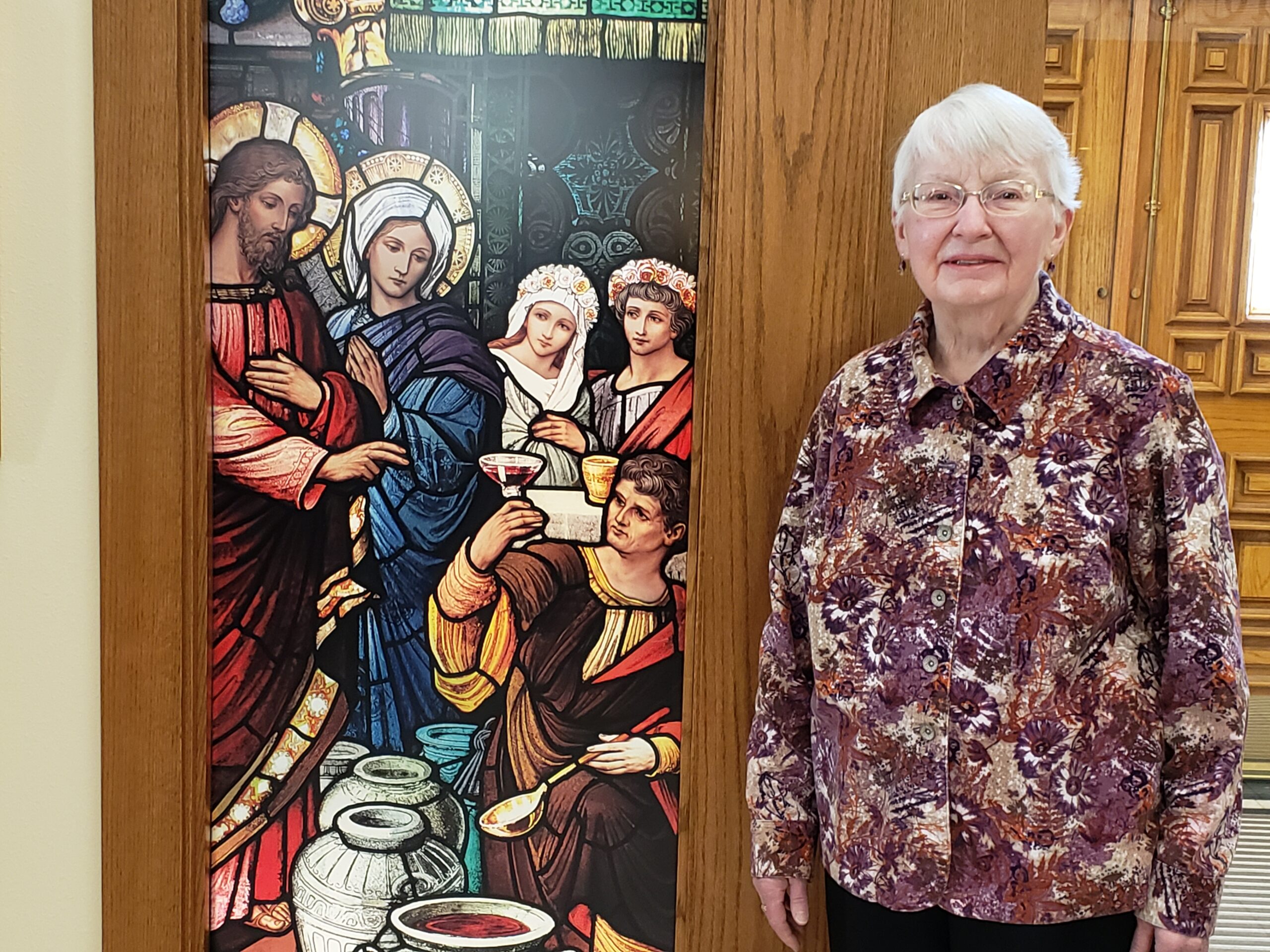 “I’m fascinated by people,” Carol Dean of Our Lady Queen of Heaven Parish in Wisconsin Rapids shares. “We’re all very unique, and we all have our own fascinating stories to tell. Even some of the quiet people need somebody to listen to them. That’s one of the lessons I’ve learned in life.”

Sitting in a pew or attending a Bible study with Carol, one may overlook the stories she herself has to share. But if we’re lucky, her wisdom and sense of adventure will come through and give us a glimpse of her fascinating life. “I’ve always thought of myself as yearning and curious to know more about my God and my Catholic Faith,” she says, “So this has been a lifelong journey of learning and growing.”

Carol was born in Appleton during World War II. Her father was raised a German Lutheran. His first wife died during childbirth when she was 19. Their son survived. Her father then married a Catholic woman and converted to Catholicism, embracing it and exemplifying it for his family. Carol was the first child of their union, followed by five boys. “I’ve always held my father as my role model,” Carol explains. “He was a very good, kind and loving man.”

Family life for Carol was busy. “I was the babysitter for all the little boys,” she says. “I usually had to share my room with the latest little baby boy who was in the crib. And I got to do all the ironing in the house … it was a busy, good life.”

Carol attended St. Joseph Parish and Grade School in Appleton and high school at St. Mary in Menasha. She was taught by the School Sisters of Notre Dame and was provided with an “excellent education.” The Capuchin brothers and priests served her parish and school. Carol’s positive interaction with them impressed on her their Franciscan spirituality. Beginning in grade school, Carol was attracted to the idea of religious life, and during her senior retreat discerned she would enter a convent.

Seeking a Franciscan nursing community, Carol found the Franciscan Sisters of the Immaculate Conception. After graduating from high school, she was accepted and moved into their Mother House, located in Rock Island, Ill. During her three years of novitiate, Carol lived a life of solitude and learning within the community. Silence was practiced except for an hour of recreation after both lunch and supper. Spiritual reading was a part of the mealtime routine, and Carol was frequently assigned to read from Thomas à Kempis’ “Imitation of Christ” to the other sisters while they ate, a task she readily enjoyed, and feels it prepared her well for her years as a lector. “I really learned a true appreciation [of] and comfort with silence,” says Carol. “And to this day, I look for silence as a time to think, a time to pray, a time to meditate.”

[The Eucharist] is our food for the journey. It gives me strength to get through the tough stuff.”  – Carol

In preparation for a nursing ministry, Carol was sent to Marycrest College in Davenport, Iowa, to earn her Bachelor of Science in Nursing. She was then sent to Wayne State University in Detroit to work toward her Masters in Psychiatric Nursing. While Carol was there, she experienced more visibly the cultural changes of the 1960s. Between the societal upheaval of the time and the discontent and confusion surrounding the Second Vatican Council, Carol discerned she was not to make final vows with the Franciscan Sisters of the Immaculate Conception. She completed her degree and took a position at Sinai Hospital in Detroit. During her four-year tenure there, she shares, “I developed an appreciation of the Jewish people I met, their history and religion.” It remains an experience that has deepened her own Catholic Faith.

Carol met her husband, Dick, while she was living and working in Detroit. Their first son, Brian, was born at Sinai. Just after the birth, Dick was offered a management position at Consolidated Papers in Wisconsin Rapids. The Deans set up a home in neighboring Port Edwards and built their life in Central Wisconsin. Carol and Richard had two more sons—Paul and Kevin. Carol worked at Edgewater Haven, the Wood County nursing home, as the director of nursing for 30 years. “These were busy times,” shares Carol, raising her family and working full time. The Deans attended Our Lady Queen of Heaven Parish in Wisconsin Rapids and sent their boys to the parish school and Assumption High School. “I couldn’t take on [anything] extra during those times,” she says, but her desire to learn and grow in the Faith never waned.

In 1998, after five years of suffering from COPD, Dick died. His passing left Carol to raise her two sons remaining at home by herself, her youngest just a freshman in high school. She worked a few more years before retiring. She planned to help her father care for her ailing mother, but her mom died before her retirement was official. Still, Carol saw her retirement as a “gift and blessing” to do many of the things she hadn’t been able to take part in before.

Carol became an avid traveler upon retirement. “I’m amazed at the beauty, the majesty of the world that God has made. And the wide variety of people in it.” She’s been around the globe, exploring “how different people in different places live.” She looks forward to attending Mass at different locations when traveling.

Upon her mother’s death, Carol became her father’s travel companion every winter as he ventured to Gulf Shores, Ala. She joined him there for 18 winters until his death in 2020 at the age of 102. She sees these trips as such a treasure. Her brothers often traveled to visit as well, making for enjoyable family reunions.

Retirement for Carol has also meant being more involved at Our Lady Queen of Heaven Parish, becoming a lector and an extraordinary minister of holy Communion here, as well as serving at their winter parish, Our Lady of the Gulf. She brings the Eucharist to people who are homebound and soaks up every Bible study her parish offers. She feels she could never learn or read enough. Rounding out her time, Carol became a hospice volunteer and Serra Club member, has committed herself to weekly perpetual adoration and joined the Sisters of St. Joseph of the Third Order of St. Francis as an associate.

Bringing the Eucharist to others—be it through her homebound ministry or at Mass—is important to Carol. “[The Eucharist] is our food for the journey,” she shares. “It is what strengthens us. It gives me strength to get through the tough stuff. And I’ve gotten through some tough stuff.”

“I really try to see Christ in others. I hope they see Christ in me. In all my contacts throughout my years of life, I see us as being lay apostles to bring Christ to others—no matter where we are, no matter what we’re doing.”