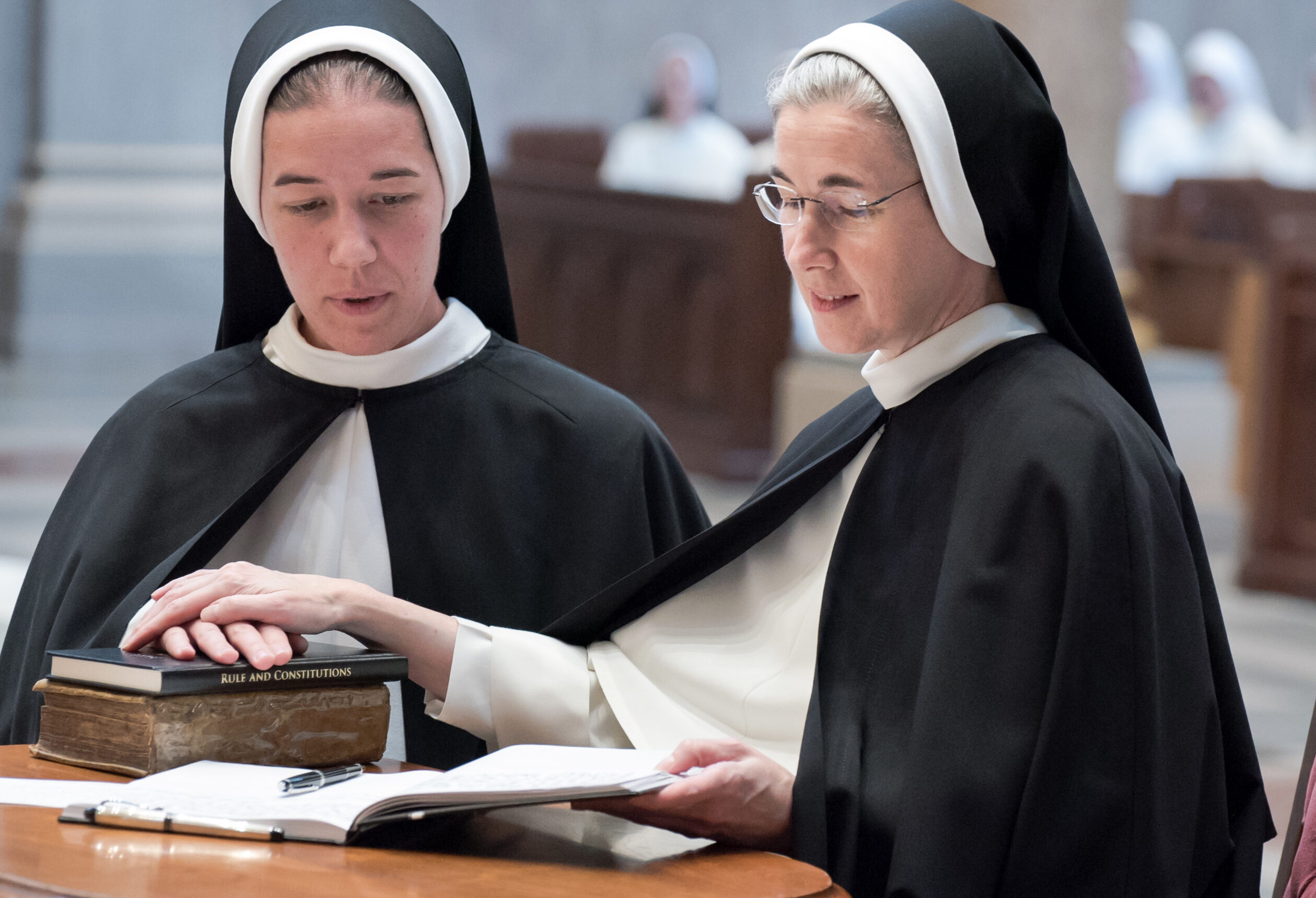 Sister Anna Cecilia Kuhn, a Dominican Sister of St. Cecilia in Nashville, Tenn., can recall feeling an initial pull toward religious life at a very young age. “I have a very distinct memory of being 5 years old and feeling a strong desire to serve God,” she says. “But nothing really materialized beyond that for many years.”

She grew up on a farm outside of Neillsville, with her parents, Richard and Donna, and seven siblings. “I had a normal Catholic upbringing,” Sister Anna Cecilia remembers. “My whole family was very active at St. Mary Parish. It was normal for someone in our family to be involved in every Mass—whether it was serving, reading or singing in the choir. The church became kind of a home base for me. We lived 15 miles outside of town, and if we were in town waiting for Mom and Dad, I would pop into the church. I was drawn to it from a very young age.”

Sister Anna Cecilia attended the Steubenville North Youth Conference in Rochester, Minn., when she was a sophomore in high school. “Before the opening session, there was music playing to get us pumped up for the conference,” she says. “There was one song where the lyrics mentioned God’s house. In that moment, I pictured myself in a convent. It totally freaked me out because normal people think about heaven when they hear the words ‘God’s house.’ And here I was, thinking about a convent.” She didn’t tell anyone what she had experienced. “For the next three years, I tried my very best to ignore what happened!” she adds with a laugh.

Following high school, she decided to attend UW-La Crosse to pursue a biomedical engineering career. “It was an intense five-year program, and I needed to take certain classes in a certain time frame, but I couldn’t get into any of them. Nothing seemed to be working out,” Sister Anna Cecilia remembers. “My mom saw my frustration and asked, ‘Is there any other career you have been thinking about? Maybe not getting into the classes you need is the Lord’s way of saying you should consider other options.’” Her mother suggested she go to her bedroom and pray about it. Instead, Sister Anna Cecilia got into the car and drove to St. Mary Church.

“I really let the Lord have it,” she says. “I told Him how angry I was, and that I just wanted to go to college like a normal person. Why wouldn’t He let that work?” The next day she tried again, but this time, she was able to register for the classes she needed.

As a freshman at UW-La Crosse, her schedule allowed her to attend daily Mass and then spend time in eucharistic adoration before heading to class. “It was special, finding that connection with Our Lord in the Eucharist, being in His Presence, being drawn to Him,” Sister Anna Cecilia remembers.

“The first thing we did was make a chapel visit to say hello to Our Lord. I took a deep sigh of relief and I knew, before the retreat even began, that this was my vocation.”

“Within three months, I went to Father James Kurzynski, a former pastor of Roncalli Newman Parish, and told him, ‘I think I have a vocation. Now what am I supposed to do?’” she says. “I was just sobbing. He told me I didn’t have to take that step that day! He suggested we meet regularly to talk and that I begin to build a life of prayer. Because no matter what God was calling me to do, having an active prayer life was important.”

By the end of her freshman year, she decided to attend a vocation retreat with the Dominican Sisters of St. Cecilia. “I had met two Dominican sisters when I went to World Youth Day in Madrid while in high school,” she says. “I saw they had just incredible joy and it drew me to them. The sisters I met were the complete opposite of one another—one was reserved and the other outgoing—but both had that joy. And I thought, ‘OK, you can have your own personality and still be a sister.’”

The retreat was held at the motherhouse in Nashville. “The first thing we did was make a chapel visit to say hello to Our Lord,” she continues. “The minute I walked into the chapel, I took a deep sigh of relief and I knew, before the retreat even began, that this was my vocation.”

Sister Anna Cecilia talked with the vocation director and together they decided she wasn’t quite ready to enter that summer. She returned home after the retreat but stayed in contact with the sisters. “I went on another vocation retreat to the motherhouse the following January, and that is when I asked if I could enter,” she says.

She began the application process, which continued through the summer of 2014. “The timing was right. That summer my brother, Nate, was ordained a priest and I was grateful to be there,” she says. “If I had entered the community any earlier, I wouldn’t have been home for his ordination, so that was a grace to wait.”

Sister Anna Cecilia entered as a postulant on Aug. 15, 2014, to begin an eight-year religious formation process, which culminated when she made her profession of perpetual vows on July 26, 2021. During those years, she also completed college coursework to obtain her teaching certificate. “When I thought about professions, I never really considered becoming a teacher,” she shares. “But I find that I do enjoy it.”

She says as a youngster, she dreamed of getting married and having a large family. “The Lord used that desire in a different way than I imagined,” she says. “Now I have 300 sisters—the Dominican sisters in my congregation. And I experience spiritual motherhood through the children that I teach. It’s not the same, but I’m still loving them and praying for them. The Lord puts children in my care, and I am able to bring them to Him.”

Sister Anna Cecilia says she has found great joy as a Dominican sister. “I love just living my religious life,” she says. “It’s steady and centered around that union with Christ. If I have a bad day and feel like a failure, I’m actually not, because if I took Christ with me wherever I went, His work is being done as He wants it. We scatter the seeds and He’s in charge of the growing. I don’t have to see outcomes; that’s up to the Lord. It’s all about being faithful to the life I’ve promised to live.”

Sister Anna Cecilia believes fostering vocations begins with the family. “When parents spend time with their children, eat together, pray together, they set a foundation for a vocation, whether it be to religious life or holy marriage. When Faith is a normal part of a child’s life, they’ll see how important it is and it will remain a part of their life forever.”

For the person considering a religious vocation, Sister Anna Cecilia has these words of advice. “The Lord has a plan for each person. His plan for your life is so much better than the plan you come up with on your own,” she says. “No matter what His plan is for you, you need to be open to hearing Him. Spend time in prayer and eucharistic adoration, because when you’re in His presence, He can work in your heart without you knowing it. He will lead you where He wants you.”