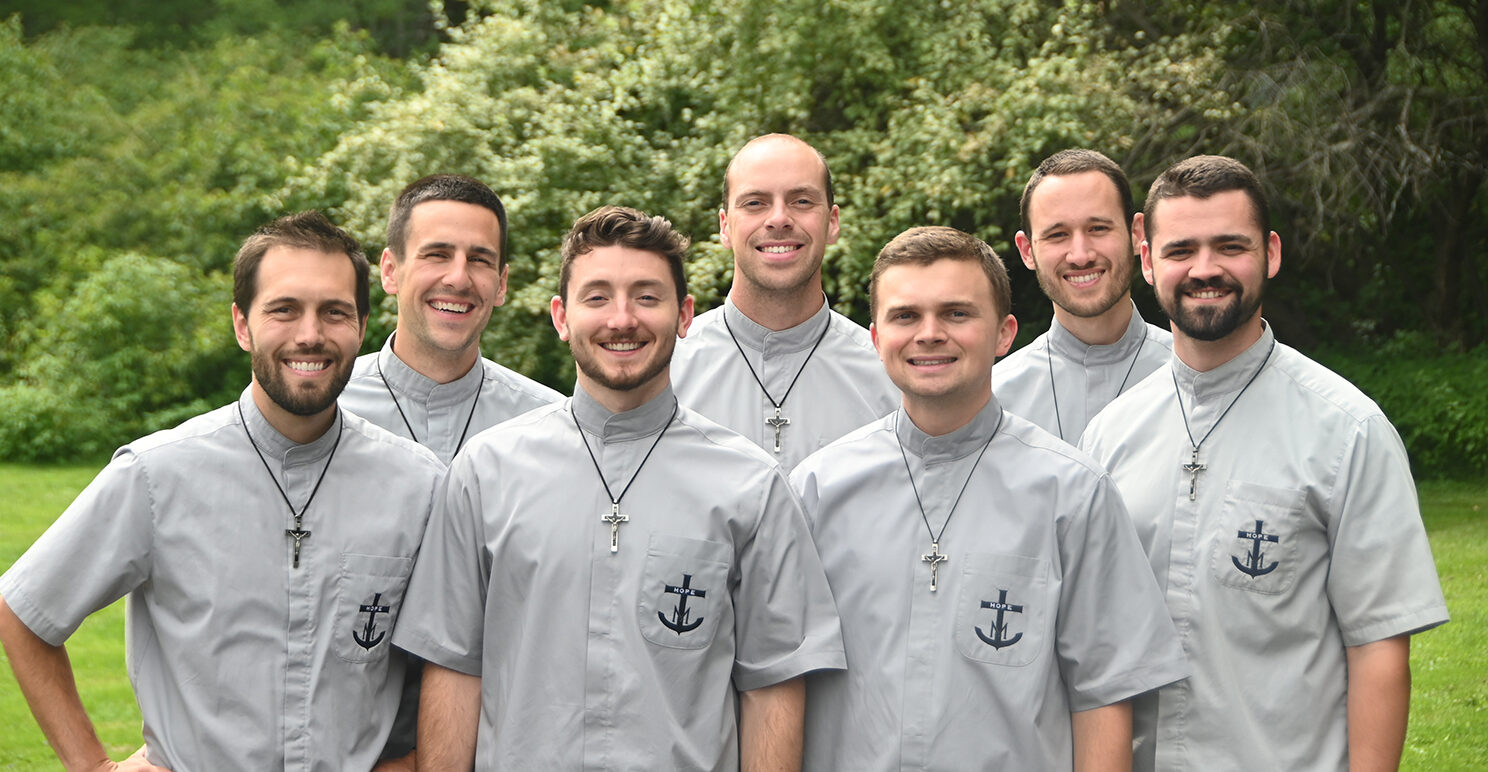 While discerning his vocation, he found peace, freedom and meaning.

Brother Austin Riordan’s conversion began 11 years ago while attending a late evening Sunday Mass during the first semester of his first year at the University of St. Thomas. “I was at a particularly low point in my life, longing for peace, freedom and meaning,” he remembers. “I was not satisfied with my life and searching for something.” Then he heard a hymn at Mass based on the book “The Confessions of St. Augustine.” “A particular lyric, ‘My heart searches restlessly, until it rests in thee,’ struck me more than any others,” he says. “The words seemed to jump off the page, and I became extremely convicted that I wasn’t going to be satisfied, or have inner peace, until I began to pursue a relationship with God again.”

Thus began a journey of “rediscovering and reengaging” the Catholic Faith he first experienced growing up in Plover. “I came from a good Catholic family that prayed before meals and went to Mass every Sunday at St. Bronislava Church,” Brother Austin says. He and his four siblings attended Catholic grade and high schools. “Although I personally started off on a good path, in high school I began to quickly compromise my Faith and values,” he admits.

Brother Austin says college and the community of Faith he came to know were crucial in deepening his conversion. “About a year after my encounter with Augustine’s words at that Sunday Mass, students in a campus ministry organization called Saint Paul’s Outreach (SPO) reached out to me and we became friends,” Brother Austin remembers. “I saw in them men and women who lived like God actually existed. They were the most joyful people I had ever met. They were fun and adventurous, and I wanted to be around them. I wanted to be like them.”

Joining SPO was pivotal for Brother Austin. “Through this ministry, I experienced community life, deep personal prayer and communal worship, and general Christian formation,” he explains. “This is also when I began to be convicted about the need to evangelize and started taking small steps to do so.”

Brother Austin also met Nick Redd, who became a significant pastoral leader in his life. “Nick helped me to encounter God the Father as someone who is kind and compassionate, and really delights in who I am,” he says. “He showed me I am loved by God—an immense and incredible Being—who shouldn’t care anything about me, but does.”

Brother Austin developed an interest in serving as a SPO missionary upon graduation from St. Thomas. “I really wanted to commit to it, but I had a lot of anxiety and uncertainty not knowing if this was a good path for me in life,” he says. “If I did this, God would be asking me to give up a lot. But in the end, God allowed me to put my plans aside and trust that He had good things in store for me.” Brother Austin served as a SPO missionary for two years.

While at St. Thomas, Brother Austin was also introduced to a Catholic community of brothers who would dramatically change his life. The Brotherhood of Hope, founded in 1980 in Newark, N.J., has a primary mission of evangelization to young adults, most frequently on secular college campuses. They evangelize on behalf of the Catholic Church on six campuses in four states—one of those being the University of Minnesota.

“The brothers partnered with SPO my senior year in college, so I got to know them at trainings and staff meetings,” Brother Austin recalls. In May of 2016, he was invited by the Brotherhood of Hope to travel to Calcutta to serve with Mother St. Teresa’s Missionaries of Charity. “I knew this was a service trip, and I think in the back of my mind, I realized it was a discernment trip with the brotherhood, although I didn’t fully realize that until I was there. God really gave me the holy blindfold!” he admits with a laugh.

Brother Austin says he encountered deep poverty in Calcutta, but also deep love and deep charity. “The sisters are incredible. They serve with such joy, even when they are serving the poorest of the poor and have so little themselves,” he says. “I remember one sister who was probably 90 years old, helping an old man walk back and forth when she could barely walk herself. She had such a bright smile, the joy just radiated from her face. I was struck by how joyful she was serving and giving her life to God.”

Two brothers on the trip particularly inspired Brother Austin with their way of life. “I saw them reaching out to other volunteers, some with no faith background, and serving alongside all of us. Their witness was very powerful to me.”

Following the trip, he officially expressed his interest in the Brotherhood of Hope. “Nine months or so later, and after some significant prayer and wrestling with the Lord, I made a choice to trust the Lord and enter the novitiate,” Brother Austin says. The brotherhood’s formation process is typically five to seven years. The first year is the novitiate, followed by temporary vows for three to five years before professing perpetual vows. God willing, Brother Austin will profess his perpetual vows in July 2023.

The brothers serve in campus ministry during their time in temporary vows. Currently, Brother Austin serves at Northeastern University in Boston. “We reach out to students who either don’t know God, are on their way to knowing God, or know God and are ready to implement their belief into their daily life,” he explains. “It’s exciting to watch students grow in their maturity.”

Brother Austin says his decision to join the Brotherhood of Hope, while not always easy, has been deeply rewarding. “The brothers are an amazing group with a certain emphasis on fraternal life,” he says. “We are bonded in a very simple but profound way of offering our life to Jesus. We authentically love one another and are a true family.”

Brother Austin says his vocation has brought a real and deep purpose to his life. “My relationship with God the Father is the principal joy and sustenance of my life,” he says. “I could not make it a day without my relationship with the Lord.”